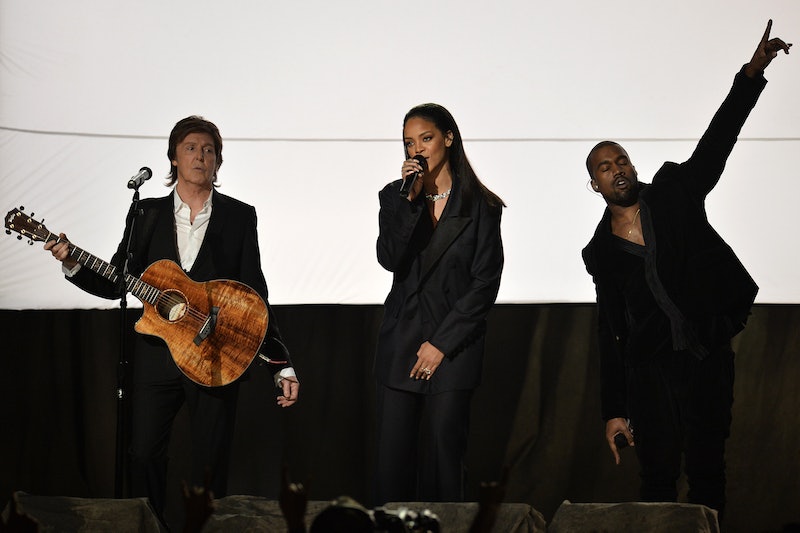 Did anyone else notice that one of the most anticipated performances of the 2015 Grammys, "FourFiveSeconds," seemed to be missing something? Something kind of important, like oh, I don't know, the voice of one of its singers?! "FourFiveSeconds" is supposed to be a collaboration between Kanye West, Rihanna, and Paul McCartney, but during their Grammys performance, it seemed like McCartney's microphone was off. At first, I thought I just couldn't hear him for some reason. Or that maybe they were saving Sir Paul for later in the performance. But it quickly became apparent that I wasn't the only one (get it?) to notice the lack of McCartney.

Every time the camera cut to McCartney enthusiastically singing into the microphone, we still only heard West and Rihanna. Now, I would never complain about hearing either of them, but McCartney adds something great to "FourFiveSeconds," and I was looking forward to hearing all three voices during the first live performance of the song. It's certainly possible that McCartney's mic was just too low to hear over the music and two other performers, however there also could have been some sort of technical malfunction. At one point, it looked like McCartney might have even realized his mic wasn't working properly. Is that a side-eye he's giving Rihanna and West in the photo below?

When it came time to end the performance, however, McCartney seemed pretty happy, getting close to Rihanna and pointing at her and West.

Still, when there's anything remotely questionable about a highly anticipated, song-premiering performance at a giant awards show, you know Twitter is going to notice. It seems everyone watching at home immediately took to the Internet to express their shock and see if anyone else was picking up on the apparent issue.

I'm always done to hear more "FourFiveSeconds," and I have a feeling that if the Grammys were to bring Rihanna, McCartney, and West back out on stage to give it another go, there wouldn't be many complaints.