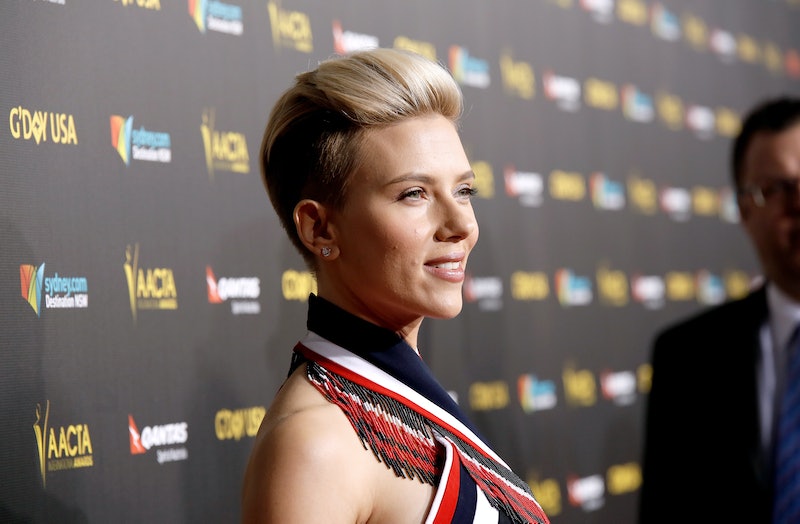 Scarlett Johansson may be a brand new mom, but the actress is becoming quite a rocker with her looks as of late. Her side-shaved, Miley Cyrus-like pixie can be styled in many punk rock or neo-new wave ways in order to avoid falling into the soccer mom trap of short 'dos. Scarlett Johansson's March 2015 W Cover is punk rock too, but in a totally different and unquestionable way. I'm feeling some serious Debbie Harry inspo here — and I like it. Scar Jo's smoky, sooty eye makeup is the focus, as is her feathery shag, which is like a blonde version of Joan Jett's signature cut. Usually those voluptuous lips are her signature feature, but they are stained pale pink and played down here.

Scar Jo's bangs on the new W cover further play up her eyes, since the fringe skims her brow. Her stare is a mixture of smoldering and bored and she is channeling the ultra-sexy Johansson of old. Her also-famous cleavage makes an appearance as well, so the image is not only "retro" in how it pays homage to girls who rocked CBGBs back in the day but in how it reminds us of Scarlett Johansson when her A-list star was on its rise in the early '00s.

Doesn't Scar Jo look like she should be in front of a mic, cloaked in a leather jacket?

Thanks to the shaved sides and the bouffant, her new, love-it-or-hate-it short cut has some edge. It's very Miley.

Here are four other super memorable Johansson mag covers, to celebrate her stint with W this month.

Scar Jo was in the buff with Keira Knightley and Tom Ford. She showed off her fair skin for Vanity Fair.

This isn't anything cray cray, but the actress was a total Old Hollywood glam bombshell for Vogue.

Johansson oozed sex for her Esquire cover, since she sorta had to, given that nod and all.

The eyes and lips had it on her red hot Marie Claire cover.