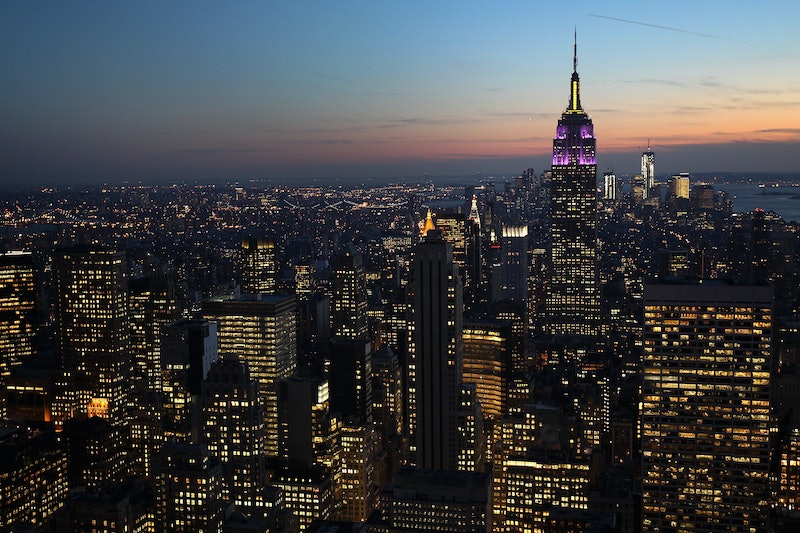 If you've ever wondered whether where you live affects your dating behaviors, online dating app Clover might be able to tell you — as long as you live in New York City, that is. In an effort to suss out how New Yorkers handle dating, Clover's latest study took a look at NYC dating trends by borough — and it turns out folks from, say, Queens date differently than people from Staten Island. Interesting, no? Here's how it all breaks down.

Clover analyzed data from 10,000 of its New York-based users between the ages of 18 and 60. Although the split between the boroughs was relatively even — 20 percent live in the Bronx, 18 percent in Brooklyn, 22 percent in Manhattan, 26 percent in Queens, and 13 percent in Staten Island — the amount of men sampled far outnumbered the amount of women: 75 percent to 25 percent. Whether that's indicative of Clover's user database overall remains to be seen, and it doesn't take into account orientation or other preferences; even so, though, it's probably worth noting.

In general, matchups seem to happen more frequently between people from the same borough. Furthermore, while this isn't the case in every single borough, the race was still pretty close in both of the outliers: Brooklyn matched with itself 26 percent of the time, beaten only by Queens at 27 percent and Manhattan at 29 percent; meanwhile, the Bronx matched with itself 24 percent of the time and with Manhattan 28 percent of the time. Is this surprising? Maybe not as surprising as you might think. As Clover CEO Isaac Raichyk put it, “The results of the study seem to suggest that where you live can affect your odds of success when it comes to finding a date. We were very surprised by the level of cross borough activity and by how much transportation access, local culture, and socioeconomics play a role in the dating process.”

I'll admit that I'm less interested in the whole “local culture and socioeconomics” thing — it's not exactly news that like-minded people tend to hang out with each other — but the bit about transportation access? Bullseye. I don't tend to think of the boroughs as being totally separate from one another — they're all just parts that make up a whole, not entirely different planets — but both distance and how well the subway is running at any given time can make inter-borough relationships feel like long distance ones (or at least middle distance ones). Have you ever tried to get from northern Manhattan down to Brooklyn in the wee hours of the morning on a weekend? It can take hours. It's an investment, and in our increasingly busy world, sometimes it's just not feasible.

Perhaps the least surprising result, however, had to do with Staten Island: At 48 percent, it matches with itself at an overwhelming rate. It makes sense, though, given that the only way in or out of Staten Island is the ferry. Sure, it's free — but it's a bitch to get to, and it's one hell of a commute from there to anywhere else in the city. I am, however, kind of surprised at the borough's most active time: Between 2 and 6 PM. Apparently people who live on Staten Island don't tend to work 9-to-5s.

Is anyone else kind of curious about whether other big cities known for their division of neighborhoods follow similar trends? I mean, do folks who live in Los Angeles also take geography into account when dating? What about residents of cities in other countries, like London? Food for thought, no? In the meantime, though, check out the full results from Clover's NYC study in the infographic below; head on over to the iTunes App Store to download Clover for free.