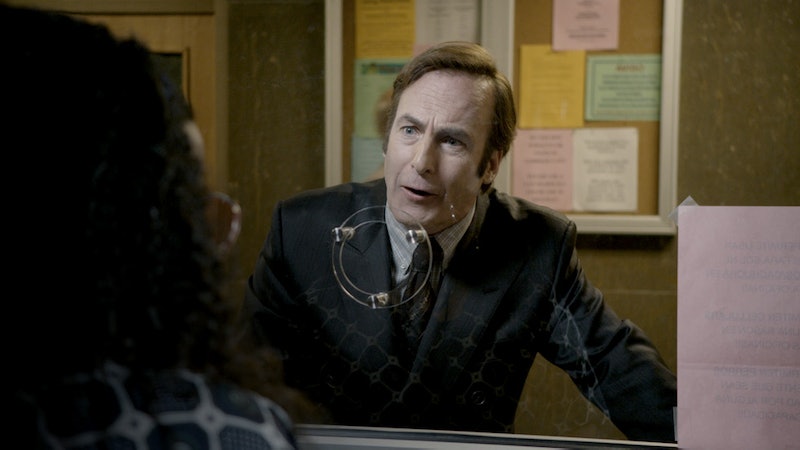 Breaking Bad was built on a question: How does mild-mannered high school teacher and world class pushover Walter White become a bloodthirsty kingpin of the crystal meth empire? The celebrated series’ new spinoff Better Call Saul is built on a similar, albeit somewhat less dramatic question: How does a shifty, two-bit lawyer who can’t make ends meet become… well, a shifty, two-bit lawyer who just happens to land a pretty high-profile client?

Although Bob Odenkirk’s eponymous antihero doesn’t look to have quite the transformative journey with which Bryan Cranston wowed American audiences, his road yet to come is still paved with a good deal of intrigue. Accompanying that central question right off the bat are a good plenty smaller ones. Questions that concern not only Jimmy's days to come, but those of his supporting players (we even have one about the past of a major Better Call Saul secondary character).

So, if you caught the Better Call Saul pilot on Sunday night and are teeming with questions of your own, check below to see if we've covered your hungriest curiosities. If Saul is anywhere as ambitious as its predecessor Breaking Bad, you can bet that the second episode (which airs tonight!) will answer a few and open plenty more.

Even newcomers to the Vince Gilligan universe know (by virtue of the show’s title) that somewhere down the line, James M. McGill will take on the identity of Saul Goodman. The question: will the adoption of this handle mark the conclusion of the series, or come early on?

I’d have to bet on the latter; the seeds have already been planted, courtesy of Jimmy’s somewhat self-righteous brother Chuck (Michael McKean) — himself a top tier lawyer on mental health sabbatical — who believes that Jim’s utilization of the McGill name will conflict with the reputation of his firm, Hamlin, Hamlin & McGill. Jimmy coming into his own as Saul will more likely than not take way in the near future… though he’s clearly got a few bigger fish to fry at present.

Will We Learn About Mike’s Past in Philly?

Our first glimpse of Jonathan Banks, lording his power as a parking garage attendant over an insubordinate Jimmy, was a particularly exciting moment for returning Breaking Bad fans. It’s understood that Mike Ehrmantraut will develop some kind of relationship with Jimmy over the course of the series, but that’s not all we might want from the character.

When we met Mike in Breaking Bad, we were dealt snippets of information about his dark past in Philadelphia, but we never found out exactly what went wrong back East. Sometimes the mystery is stronger than the information proper… but to hell with it! I want to know Mike’s Philly story!

Will Michael McKean Be Jimmy's "Skyler"?

At present, Jimmy's relationship with his brother Chuck is the most important and most complicated one that he has in his life, stepping into the role Anna Gunn played for Bryan Cranston on Breaking Bad. But just as Gunn's Skyler wavered between audience antipathy and sympathy as Walt devolved to monstrosity, McKean's character (who at once commands pity and derision for his treatment of his brother) will likely shift about as Jimmy careens through his adventures yet to come.

Something tells me that Chuck, battling a psychological disorder that precludes him from being around electricity (in other words, outside of his own home), won't maintain the "on the ball" demeanor that he upholds in the pilot. I'm reminded of Tony Soprano's relationship with Uncle Junior on The Sopranos; even as the latter descended to dementia, he maintained his stronghold on Tony's fragmented ego. Could Chuck's slipping sanity provoke this same kind of emotional unrest in Jimmy?

And Will Howard Hamlin Be His "Gus"?

Patrick Fabian's character, the head honcho at Chuck's old firm, seems to be setting up as Jimmy's chief adversary... or at least the chief source of his grief. But will Fabian's villainy take the form of the immediate antagonism that Walt got from Gus Fring, or will the shared enmity bubble mostly beneath Jimmy's surface (more in the way that Walt felt about his old college pal Elliot, or Skyler's former boss/short term boyfriend Ted)?

So far, Better Call Saul has lacked any memorable female characters. Odenkirk stands as the star (obviously); McKean is his Mycroft Holmes; Patrick Fabian is his chief adversary as Howard Hamlin; and Banks and Raymond Cruz will play roles of note — not to mention those skateboarding twins. The pilot allowed Rhea Seehorn, as top tier HHM lawyer Kim Wexler, a moment of quiet pathos alongside a suffering Jimmy. Clearly, there’s an understanding between the two of them that exceeds what Jimmy seems to have with anyone else in his life. What exactly does Better Call Saul have in store for Seehorn’s character?

Will the Skateboarding Twins Stay Involved?

Vince Gilligan loves his twins. In Breaking Bad, we had the silent Salemanca brothers; in Better Call Saul, the yet unnamed skateboarding punks who make a living scamming innocent drivers out of a few bucks. The duo has already found itself wound up in a hefty sum of trouble thanks to association with Saul — they’re currently staring down the barrel of a loony Tuco Salemanca — but will future episodes keep them adhered to Jimmy’s schemes? Honestly, the fact that they don’t have names doesn’t really bode well for their fates past Episode 2…

How Much of the Salemanca Family Will We Be Seeing?

Speaking of Tuco, what is the extent of his involvement in Better Call Saul? Furthermore, what is the extent of his grandmother’s involvement? Breaking Bad introduced a Tuco who doted over his aging uncle Hector Salemanca, who turned out to be a drug lord of unexpected proportion. Is there any chance his grandma, who showed up in the Saul pilot, is involved in the crime world to any substantial degree?

Will We Spend Any More Time in the Post-Breaking Bad World?

My favorite element of the Better Call Saul pilot was the intro — the somber, wordless portrait of Saul Goodman’s miserable life in Omaha following his catastrophic partnership with Walter White. Distinguished by a black-and-white veneer in contrast to the rest of the episode’s vibrant color, the “sequel” material stands as independently interesting, telling a full story in its own right. It’d be understandable for Better Call Saul to remain adhered to the pre-Breaking Bad stuff, but here’s hoping that we get a few more glimpses of the Cinnabon life.

Luckily, we don't have to wait too long for some of these answers, as Episode 2 airs tonight!