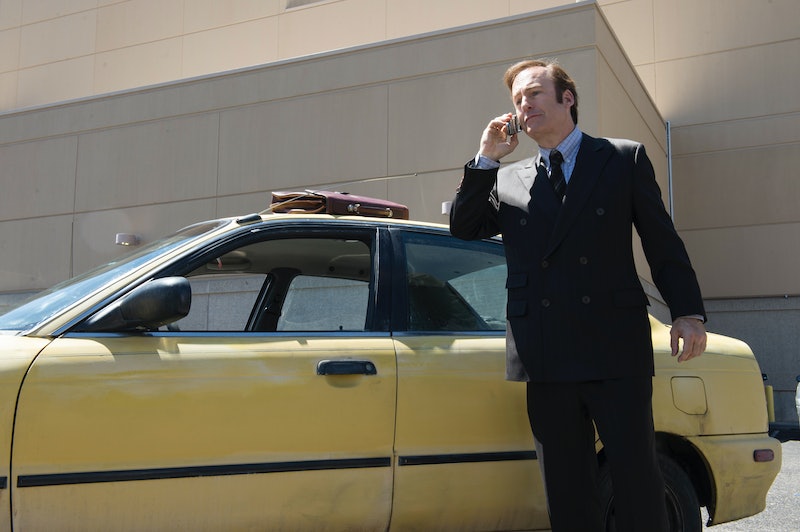 "I don't look for guilty people to represent. Who needs that aggravation?" Jimmy McGill (Bob Odenkirk) says at the beginning of Better Call Saul . He says it as sincerely as possible, because he's trying to woo a new client to his struggling law practice (which is severely struggling). But, for those of us in on the joke, it's actually a hilarious line. We already know this punchline: Jimmy McGill grows up to be Saul Goodman, a name he picked himself to attract only the most guilty clients of Albuquerque New Mexico. Better Call Saul will lead into its predecessor Breaking Bad eventually, but right now, we've got Jimmy who's driving a beat-up two-tone Suzuki Esteem that puffs black smoke. Just how long are we going to have to wait before Jimmy McGill becomes Saul Goodman on Better Call Saul?

Well, the premise is clearly set up: Jimmy is struggling hard. He works as a public defender, living paycheck to paycheck, and is also responsible for taking care of his out of work older brother, Chuck (Michael McKean). Jimmy doesn't have an office, but rather a closet tucked away in the back of a nail salon flanked by different water heaters and his phone never rings. He has clients meet him at a diner, because he has no where else to go. Everything is a far cry from a guy who will one day have his office wallpapered with the Constitution.

Even though this isn't the Saul Goodman we know and love, the inklings of Future Saul are slowly being laid down. Jimmy's got the charm, charisma, and sass of Saul ("Discrete. Like a stripper pole in a mosque!") but everything else hasn't come together yet. Instead of TV ads with catchy slogans, he's got sad-looking matchbooks to hand out. It's a little bit weird watching this character we grew to love over the course of Breaking Bad be so down on his luck. Saul Goodman of the future might be embarrassed by the Jimmy McGill we're seeing right now. Parts of the premiere are hard to wrap your head around, if only because you know what happens ten years down the road and how far Jimmy gets in life...

...which is to a Cinnabon. But that's besides the point.

While we won't see that iconic catchphrase of "Better call Saul!" just yet, at least Jimmy has started working his magic (and the magic angles) to get his way. He enlists two skateboarding bros to get hit by a car, because he knows that's a way to make a quick buck — it might also solve the problems he's having with his brother's former employer, Hamlin, Hamlin and McGill. Now that's the Saul we know, always striving to do what is clearly right and in complete line with the law!

So even though he's going by a different name right now, you know Saul's somewhere in there, just itching to find those guilty clients who he can get off with a slap on the wrist. That's the reason we call Saul, because he's the one stop shop for all criminal charges. Good thing Better Call Saul already has a second season order, because at the rate Jimmy's going, it might take a while to get there.