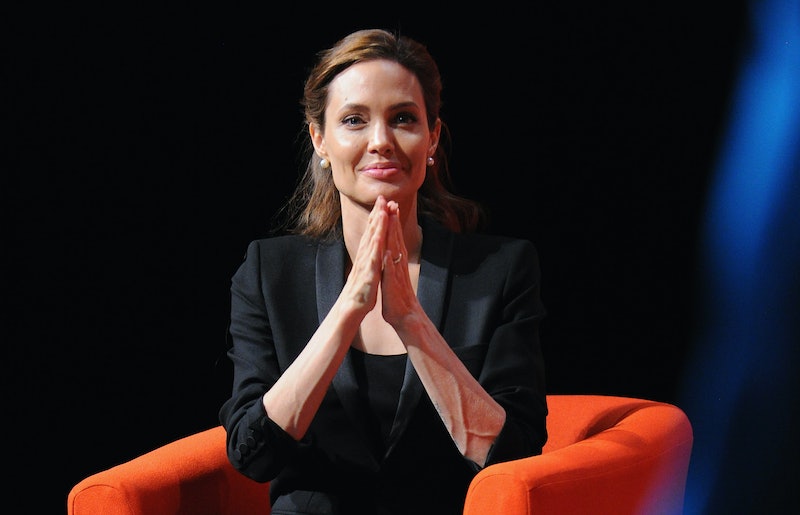 I'm gonna go ahead and call this the most intriguing rumor of the day: There's chatter saying that Angelina Jolie's being courted by Marvel for Captain Marvel . Not to star; to direct. If true — and if she accepts the gig — she'd be the first female director for a Marvel movie, and for the first female-centered Marvel film at that.

The rumor originated with OK! Magazine — a publication not exactly known for breaking stories of the MCU variety, so obviously take this all with a grain of salt. OK! claims that Marvel has offered Jolie $20 million to direct the 2018 feature.

We can debate whether or not this particular story is true right up until the day Marvel actually announces Captain Marvel's director, but it does make sense that they'd go for a female director. Warner Bros., after all, announced last year that they'd be pursuing a woman to direct 2017's Wonder Woman and then followed through by hiring Game Of Thrones and Breaking Bad director Michelle Maclaren.

With Black Panther and Captain Marvel, Marvel's shown that it's been listening (at least a little bit) to the conversation around the dangers of superhero movies staying their same-old male-centered selves, but hiring more women to actually run the show behind-the-scenes in the MCU is a crucial next step. It would make sense if Warner Bros. committing to that for one of their more high-profile movies would pressure Marvel into doing the same. Marvel almost had a female director in the past (Monster director Patty Jenkins for Thor: The Dark World ) before she, like Edgar Wright, parted with the studio over "creative differences."

2014 saw Jolie premiere Unbroken — and that's a war movie, so it's not completely foreign why she's being linked to a movie starring an Air Force pilot and eventual Avenger. Regardless of whether it's Jolie, though, or someone like Ava Duvernay, Kathryn Bigelow, Lana Wachowski, Lone Scherfig, or Debra Granik, I hope that Marvel does make an active effort to include more women in the directing and writing process of this massive, gazillion-dollar-budget extravaganza they're producing. There's no lack of talent out there ready and willing to seize the opportunity.