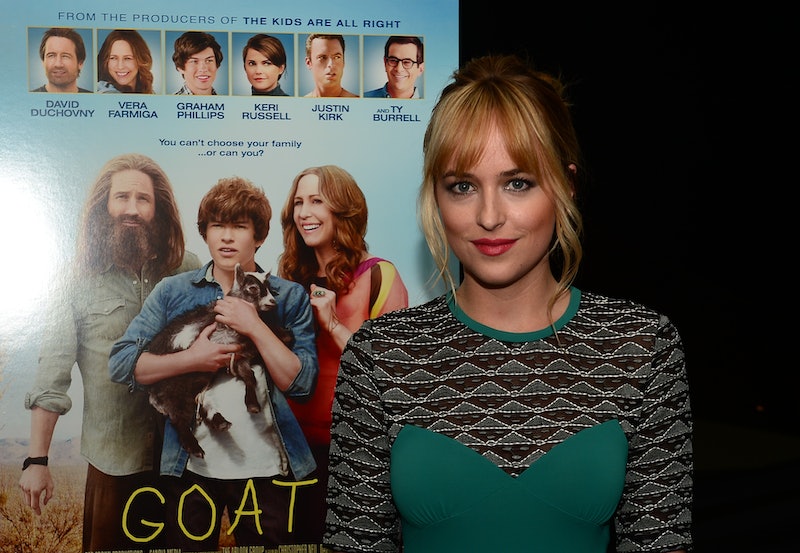 Dakota Johnson just can't get away from the sex questions on her press tour for Fifty Shades of Grey, but I guess that's just par for the course. In an interview with Access Hollywood, Johnson talked about how she got in shape for the role of Anastasia Steele, and what her favorite sex scene from the film is. If you guessed that it's the scene where Ana loses her virginity to Christian Grey — well then you would be right on the money. "The virginity scene I think is something that is so beautiful," she said. And that's all well and good, but I can't get over the fact that Fifty Shades the novel has huge problems with how it talks about virginity, and the movie's interpretation could possibly deepen the issue.

As you may or may not know, when Ana Steele meets Christian Grey for the first time, she's a pure, unexperienced virgin. She meets a mysterious and intriguing stranger, and decides that even though she's nervous, to give him her flower. To me, this is not romantic or idyllic — my first time was terrible. OK, not terrible, because having sex is hard at first, and that's fine. But there's a notion that losing your virginity as a woman is supposed to be a fond, beautiful pastel memory of love and orgasm. LOL. I'm not saying this doesn't happen for some women, but if you know any personally, let me know.

What's compounded in the problem though is that for Christian, Ana's virginity becomes a dirty little secret, her version of his Red Room of Pain. Which is total bull. The fact that she's preserved her innocence until this dark dude comes along is a dangerous and unrealistic fantasy, but more than that — at this point, it's just boring.

Of course, since the movie hasn't been released yet, there's no way for sure to know if Sam Taylor-Johnson's film adaptation of the E.L. James novel will mirror exactly the virginity scene in the book. We already know that the film differs in some serious ways from the book, like the amount of sex scenes that will be on the screen. That at least is a hopeful sign — the film could very well diverge from the idea that Ana's virginity is sacred and deal with it in a more sex-positive light. There are plenty of movies skewed towards younger women that talk about virginity in a productive way. There was The To Do List with Aubrey Plaza, where she approached her virginity like a theorem. There was research, there were steps, there was trial and error, but it wasn't some dirty THING she felt guilty about doing. She was down to do it, and she was in charge of the experiments. And then there was Easy A with Emma Stone, a modern retelling of The Scarlet Letter, one of the first morality tales about leaving women alone about their sex life, for god's sake.

Obviously Ana gets over the virgin thing real quick and travels into Christian Grey's private world of sexytime, and in that way, Fifty Shades sort of redeems itself. But I think more than that, the way she loses her virginity in the novel not only sets expectations, but could alienate an audience of girls and women whose first times were pretty sucky if it's portrayed exactly like the books. Fifty Shades of Unrealistic Expectations About Sex, may be more like it.