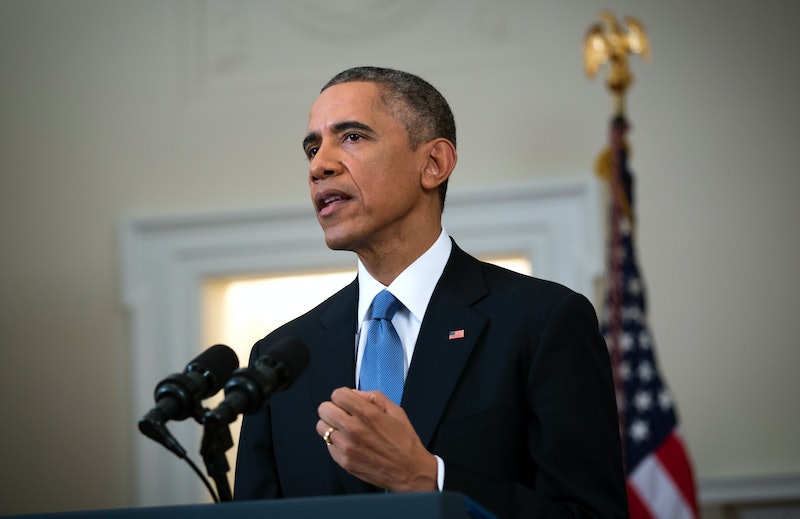 President Obama discussed his theories on domestic policy problems and how he believed they could be solved, delving deep into topics such as income disparity and corporate profits in a Jan. 23 interview with Vox. When asked what he believed was causing such starkly divided polling numbers from Americans on both sides of the aisle, Obama partly attributed political polarization to the "unlimited money" being dumped into the campaign-sphere by those in the upper echelons of society. Worse, he said, there simply was "no incentive for most members of Congress, on the House side at least, in congressional districts, to even bother trying to appeal."

Obama continued, adding that he believed constitutional reform might help regulate campaign contributions and spending. "I'd love to see changes at the state level that reduce political gerrymandering," he said. It's a weighty statement — and one that his political opponents (and even some of his supporters) have slammed him for in the past. Many conservatives have argued that the president's policies would stifle the power of contributors like billionaire brothers Charles Koch and David H. Koch, who former House Speaker Newt Gingrich told Fox News "[represent] an effort by conservatives to offset the elite media."

Liberals have insisted that Obama simply hasn't done enough — or anything at all in some cases. In a comment to Bloomberg Business, Harvard Law Professor Larry Lessig, whose super-PAC ironically spent $10 million trying to get candidates who believed in campaign finance reform elected, pointed out:

Campaign finance reform is a monumental task that hasn't been made any easier in the last few years, thanks to Supreme Court rulings such as last April's McCutcheon v. FEC, which struck down limits on the total amount of money that any one donor was allowed to give to candidates, party committees, and super-PACs in a single election cycle. Another case, Citizens United v. Federal Election Commission in 2010, dismantled the limit on corporate spending, thereby allowing organizers like Citizens United's James Bopp Jr. to take on liberal issues with 90-minute films and elaborate propaganda.

With the Koch brothers set to spend nearly $1 billion on Republican Sen. Marco Rubio in the next presidential campaign cycle, it prompts a serious discussion over how politics should be regulated, if at all. Said Lessig in a New York Times op-ed, "So long as elections cost money, we won’t end Congress’s dependence on its funders ... We can [...] make 'the funders' 'the people' [instead]."

Former Democratic Sen. Tom Harkin has gone on record about reform as well. In 2011, after joining with five of his fellow Democrats to present a constitutional amendment that would effectively overturn the Citizens United decision, Harkin said in a statement:

Since the historic Citizens United ruling, campaign contributions have skyrocketed, even outside of the typical election cycle. Wisconsin governor Scott Walker, for example, landed himself in hot water last year after it was discovered that, between his 2010 inauguration and the signing of the state budget, he took over $5.6 million in contributions.

Organizations from all corners of society have begun to put their foot down in response to the perceived spending debacle: In December, game company Cards Against Humanity, in coordination with the nonprofit The Sunlight Foundation (which aims to keep government transparent and accountable) mailed its customers region-specific lists of monetary donations made made to local legislators and congressional representatives as a part of their "Holiday Bullsh*t" campaign, in an effort to shed light on the ugly side of political donations. Some lists were over 10-feet long:

The president's declarations on campaign finance reform might be laudable, but until politics as a whole comes together to solve the crisis of government sellout, the public would be wise to take them with a grain of salt.