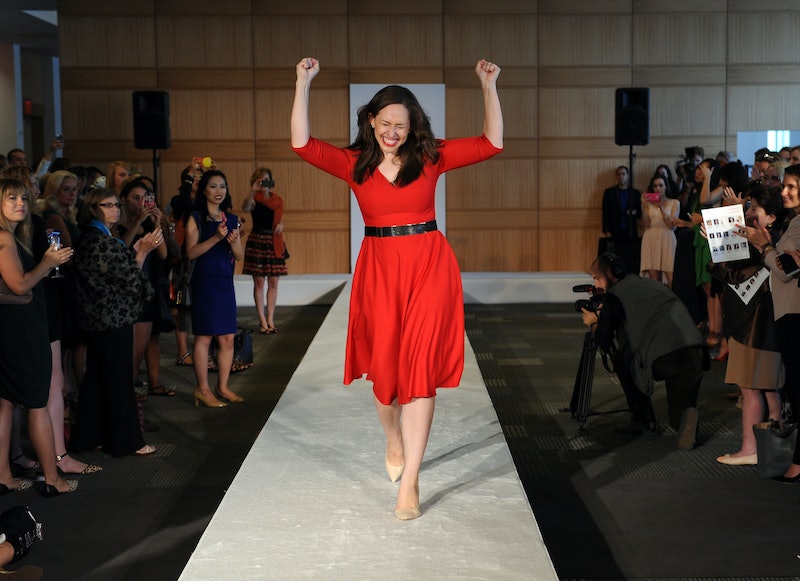 The New York Fashion Week runways have finally begun to advocate the type of beautiful diversity that exists on the streets of the real world, and one designer in particular has championed the change. Carrie Hammer debuted her premiere runway collection just shy of a year ago, with the guiding principle "Role models, not runway models" underscoring her initiative to empower the modern, multitasking woman. Instead of simply selecting models based on their aesthetic appeal, Hammer has instead pulled influential businesswomen, CEO's, vice presidents, philanthropists, and scientists onto the runway to give women a mind to emulate as well as a look.

Hammer also upholds the notion that beauty doesn't possess a singular definition, but rather emanates from confident women in many unique forms. Just last season, bacterial meningitis survivor Karen Crespo debuted customized prosthetic limbs on Carrie Hammer's runway to a booming round of cheers from Hammer's audience. This year, Jamie Brewer of American Horror Story and Bustle's very own Marie Southard Ospina are just two of the inspiring women who will walk in the show. Hammer's Fall 2015 runway is the most impassioned yet, and she's only just getting started. After securing a much-deserved spot on the coveted 2015 Forbes 30 Under 30 list, Hammer dove right back into designing her newest collection. Before debuting her latest collection as part of New York Fashion Week, Hammer took a few minutes to discuss her favorite designers, what the runway has in store for audiences this season, and how her own role models have ignited her creative spark. Here are five lessons to learn from the courageous and visionary designer.

1. Inspiration Is Everywhere If You Know Where To Look

Hammer may be surrounded by new role models each day, but the designer credits her mother, artist Jean Wells, with bestowing the artistic seed that grew into Hammer's design business. Hammer recalls Wells cultivating her daughter's imagination by incorporating creative pursuits into her life from an early age, whether with afternoons spent exploring clay works or artfully knit scarves. "She was an incredible role model to me," Hammer says, perhaps the role model who catalyzed the designer's own dedication to inspiring others.

2. Look For Role Models With Brains And Beauty

Hammer's role model lineup is the result of careful deliberation, but what the group shares is an intense intellectual drive to match their sartorial sense. Hammer's initial list of role model nominees is whittled down from over 500 nominees to a select few who she feels best encapsulate her company's principles. Fall 2015's runway boasts a double take-inducing list of accomplished women, from Senior Vice President of McCann Worldgroup Nicole V. Cramer to Senior Director of Corporate Engagement at the Cystic Fibrosis Foundation Lori Peterzell. Other standouts in the lineup include Director of Public Affairs & Diplomatic Relations at The Coca-Cola Company Missy Owens and Director of Program at Clinton Global Initiative Alexandra Amouyel. Of the role models using the greater world stage as their catwalk, Tory Burch is one of Hammer's personal luminaries.

3. Fashion Is More Than Aesthetics

Though Hammer's classic, fitted sheath dresses and tailored blazers are beautifully rendered additions to a work wardrobe, the designer is quick to remind me that the collection is about more than simply aesthetics. Hammer was once told that she should dress for the success she strove for, and her line is formulated to give a clients the confidence they need to conquer the business world, make a difference in the community, or any number of other tasks they complete during the average day.

4. Celebrate Designers Who Have Something Besides Fashion To Give

As fashion is an integral facet of Hammer's message to women, I simply had to ask about Hammer's own creative influences. Without skipping a beat, Hammer declared, "Diane von Furstenberg is my fashion role model. She was a female executive in the '70s, and sold over a million dresses in a matter of two years. I look up to women who are not afraid to lead." Indeed, Hammer's entire design philosophy is devoted to influential women who have built mighty empires from scratch. Another of Hammer's personal influencers is Tory Burch, who Hammer admires for her work to finance female entrepreneurs through her eponymous Tory Burch Foundation as much as for Burch's enormously successful fashion and lifestyle empire.

5. Understand That Egotism Will Get You Nowhere, And Selflessness Everywhere

As she paused to think about the qualities her role models shared aside from their singular willpower to succeed, Hammer cited a less conspicuous trait: humbleness. "I think that's how they got to where they are. They treat everyone as an equal, and they're incredible at what they do," Hammer stated. And indeed, the designer's role models are as renowned for their altruism and communitarian inclinations as they are for the creative or numerical output.

5. Take Every Success As A Chance To Build Something Greater

After including Ms. Wheelchair New York Danielle Sheypuk on her February 2014 runway, Hammer received an influx of emails from women who felt empowered by the manner in which Hammer demonstrated beauty's great diversity. In addition to her response from Karen Crespo, Hammer vividly recalls receiving an email from Changing The Face Of Beauty founder Katie Driscoll. As the mother of a child diagnosed with Down Syndrome, Driscoll wished for her daughter and other adolescents with disabilities to be represented in mainstream media. Driscoll created Changing The Face Of Beauty, a website with the goal of including children with disabilities in advertisements with the intention that her daughter Grace would grow into a confident woman not defined by her Down Syndrome. Driscoll found Hammer's Role Models initiative a perfect parallel to the message she wished to give her daughter. "She said, 'Thank you so much for including Danielle in your show because she provides a role model for Grace,'" Hammer explained. Stories like Driscoll's impel Hammer to work harder and continue to give the next generation of female executives real women to emulate.