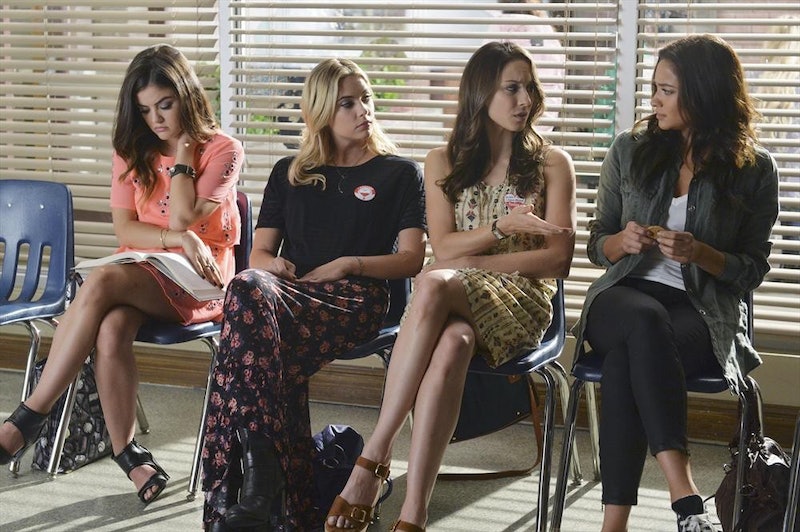 Pretty Little Liars loves nothing more than a mysteriously vague title (that also happens to reference movies, or in this case, a play), do they? A couple weeks ago, they used a title ("Through a Glass, Darkly") that they got from a famous bible quote/a 1961 Swedish film. This week, they're going further back than 1961, and just about as far back as the King James Bible: This week's PLL episode, "Out, Damned Spot," has a name inspired by Macbeth.

If you weren't forced to read William Shakespeare's Macbeth in 10th grade like I was (I kid, I kid — I love that creepy play), "Out, damned spot" is actually a famous quote from the play. (Really) long story short, Macbeth's wife is so consumed with guilt (after having a bunch of people murdered) that she goes crazy. She starts sleepwalking all the time, and perpetually sees her hands as bloodied — she can't stop washing them (fun fact: I washed my hands compulsively when I was seven, so my parents nicknamed me Lady Macbeth), and generally goes around screaming things like "Out, damned spot!" Eventually, she throws herself off a tower. Fun, right?

Very macabre, but very up Pretty Little Liars' alley — people go crazy on that show all the time (there's a reason why they still have a sanatorium from the 1940s). Anyway, let's take a look at Rosewood's guiltiest/most stressed out citizens, to see if any are primed for guilt-ridden sleepwalking episodes.

OK, the obvious choice here is Ali: Last time we got to spend time with her, she wasn't doing so well (for a refresher, her last major episode ended with her crying as the ghost of Mona threatened to drag her to hell). Whether she killed Mona and/or Bethany or not, she's definitely got a majorly guilty conscience.

Hanna hasn't actually done anything outside of the occasional shoplifted crushed velvet bustier (that we know of, anyway), but the pressure of being framed could push her to breaking point — after all, we already saw her going off the rails a bit in "The Bin of Sin."

Toby's always been a fairly tortured guy, and this whole cop thing is getting him into moral binds more than ever. Could it be enough to push him over the edge? Probably — they did bring in a new love interest for Spencer, after all...

I'm a huge fan of the whole "Mike is 'A'" theory, especially in light of the sketchy events of last week (though I suppose the fact that the Liars all actually suspect him probably knocks him out of the running for Big 'A'). That said, whatever he's doing with those little candy bags is fishy — so maybe he'll be suffering a crisis of conscience this week.

OK, if anyone's primed for a nervous breakdown, it's got to be Ashley Marin... there was all that Wilden drama, her stint in jail, and now the whole Ted Wilson/Jason diLaurentis love triangle — poor Mrs. M.

Of course, there's always the chance this title has a far more abstract meaning than I'm taking it as. Anything is possible on PLL.