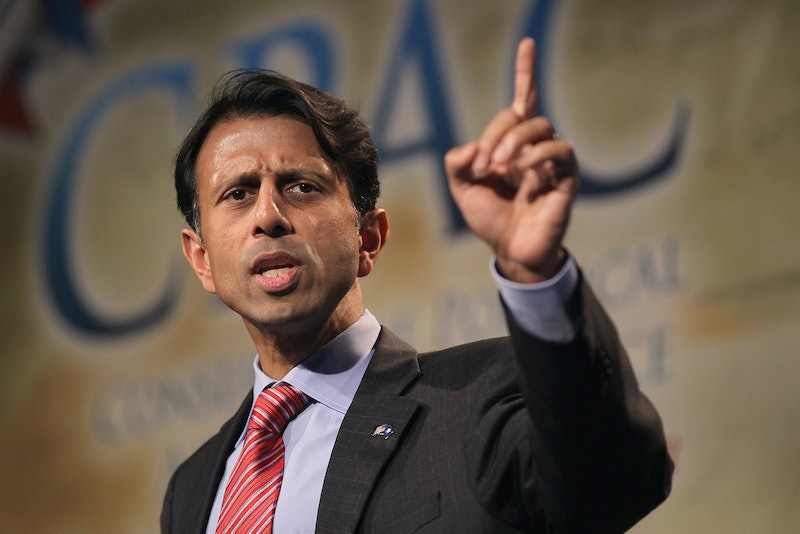 When one thinks of a loud-mouthed conservative politician, images of an older white male usually come to mind, at least for me. So Gov. Bobby Jindal, the first Indian-American ever to ascend to an American state's highest political position, and only the second Indian-American to have been in Congress, might seem like an anomaly in the party by virtue of his ethnicity — but make no mistake, the Louisiana governor's views on race are every bit as controversial as some of his party's members, if not even more so. On Monday, responding to a portrait of him with very light skin, Jindal joked, "You mean I'm not white?" Witty as he intended it to be, Jindal's response perhaps is more ironic against the backdrop of his remarks about minorities and Islam.

In August 2013, a day after the 50th anniversary of the March on Washington that fought for African Americans' right to vote, Jindal wrote a curious op-ed in Politico encouraging minorities to play down their heritage and culture, because doing so has deteriorated the country's social progress. The governor wrote:

There is nothing wrong with people being proud of their different heritages... But we must resist the politically correct trend of changing the melting pot into a salad bowl.

The glaring point Jindal seemed to have missed in his op-ed is the very different societal challenges that minority groups face — disproportionate unemployment and poverty, as well as systemic, institutional racism (think Eric Garner and Michael Brown). A failure to even acknowledge those problems is a failure to represent his own melting pot of a state.

Most recently, the Republican presidential hopeful came under fire for his remarks following the Charlie Hebdo massacre in Paris about Muslim "no-go zones" in certain European cities — a comment that, when made by a Fox News guest, allegedly made UK Prime Minister David Cameron choke "on his porridge" — that he claimed could spread to the U.S., too, if Muslims refuse to assimilate.

Born a Hindu to Indian immigrants in Baton Rogue as Piyush Jindal, he converted to Catholicism later in life and changed his name to Bobby — and people have said before that Jindal does not seem entirely comfortable with his ethnicity. Despite his rants against Muslims and minorities refusing to assimilate, he himself — who has called America a secular country in his accusations of Muslims' non-assimilation — has advocated for Catholics to resist the secular, "liberal elite."

His questionable opinions on race culminated in Louisiana political blogger Lamar White tweeting a painting of a pale Jindal with the caption, "This is Bobby Jindal's official portrait," though as several people have pointed out, it isn't actually his official portrait, it just hangs in the state's capitol building. The tweet prompted the governor's chief of staff to accuse liberals of "race baiting." (Jindal & Co. seem fond of blaming many things on the "liberals.") And later, in Jindal's own response to the tweet — besides that Richard Pryor reference — he said:

I think the left is obsessed with race. I think the dumbest thing we can do is to try to divide people by the color of their skin. The left is devoid of ideas and this is unfortunately what they’re resorted to – name-calling.

Sorry, governor, but when it is the system itself — put in place by the majority in power — that discriminates against people by the color of their skin, race is most definitely still an issue in America.