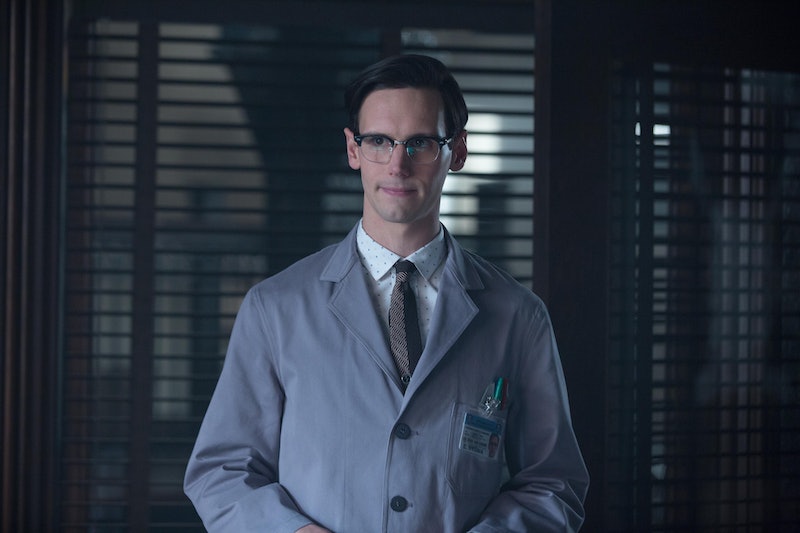 It was the moment we didn't know that we were waiting for until it happened. On Monday's episode of Gotham , between the Fish Mooney power plays and the Jim and Leslie cuteness, we got to see two iconic Batman villains finally meet face to face. No, I don't mean Ivy Pepper and Selina Kyle a.k.a Poison Ivy and Catwoman. No, it was finally time for Penguin and The Riddler to cross paths and you could tell from the music alone that this was an epic moment in the making. Their conversation might not have lasted longer than five minutes, but its legacy will live on for a lifetime — especially in the hearts and minds of the fans who are losing all their chill right now.

Oswald Cobblepot went hobbling into the Gotham City Police Department in order to invite his dear friend Jim Gordon to a party celebrating his public status as one of Don Falcone's right hand men, and was immediately spotted by Edward Nygma. Being his usual overly curious self, Ed stalked Penguin across the room in the most unsubtle way possible as madcap music played in the background until finally, finally, they were face to face — and Ed asked Penguin a riddle. And then gave him a random fact. Neither of which Penguin seemed to appreciate. But the fans did.

From the moment Penguin and The Riddler were facing each other, I was already writing the pilot script to their eventual buddy comedy in my head. The Riddler, by day Edward Nygma of the GCPD who is both alarming and alarmingly useful to his co-workers, and Penguin, by day Oswald Cobblepot of the Falcone family and a giant momma's boy. They get an apartment together in Gotham, playing off one another's quirks and idiosyncrasies as they both travel the path to becoming the villainous characters we know and love.

So, basically, the rest of the episode was kind of lost on me in the face of the possibility of a spinoff series featuring The Riddler and the Penguin. Can this please happen? Even if it's just a web series, I feel like it would be giving the people what they want. Batman has about five hundred different media works, but a buddy comedy with The Riddler and the Penguin has not, for some reason, manifested itself yet. But, hey, even if it doesn't, I'd be willing to settle for more scenes of the two of them interacting with each other on the fly for whatever reason Gotham can concoct. I'm already hooked on seeing how their relationship develops.

More like this
“The Door Is Always Open” For Another 'Breaking Bad' Spin-Off, Says AMC Boss
By El Hunt
The 'Hocus Pocus' Sequel Finally Has A Release Date & It Makes Total Sense
By Shannon Barbour and Radhika Menon
'Stranger Things' Fans Are Begging For Steve To Live For The Funniest Reasons
By Grace Wehniainen
Vanessa Hudgens Proves She's Always A Wildcat At This 'High School Musical' Location
By Alyssa Lapid
Get Even More From Bustle — Sign Up For The Newsletter