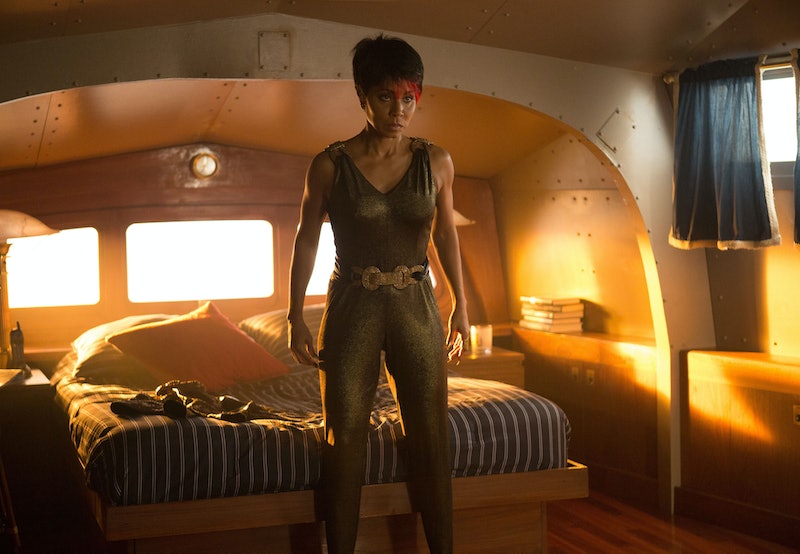 In the explosive finale of "The Fearsome Dr. Crane," Fish Mooney was attacked while in hiding on a boat, hoping to evade the revenge of Don Falcone. So what's next for Fish on Gotham, now that she's lost everything that made her such a powerful gangster? Well, it doesn't seem like her oceanic escape is going to be all that safe, despite her aquatic namesake. The guy who popped up at the end of the last episode looked a lot like a mercenary of some kind, so she might be forced to fight or swim for her life.

And judging from the new preview for "The Scarecrow," it seems like after encountering that invasion, things will only get worse for our girl Fish. Later in the episode, she'll be in a very hairy prison situation with a few guys who think they'll be able to get the jump on her because she's just over five foot tall and is wearing a gold lamé jumpsuit. Whatever this prison is, it's filled with a mix of former gangsters, thugs looking to assault someone, and that unassuming guy in a business suit who's there to explain everything to Fish about how this place works. If you ask me, exposition guy is the one you want to watch out for. How'd he end up in here, anyway? And survive long enough to learn the rules? Suspicious.

I mean, I'd take Fish at her word, because if there's one thing we know about Fish Mooney, it's that no matter what happens, she's going to survive. But even if she manages to evade her captors and escape from whatever that prison is, she'll have to figure out a new place to hide in Gotham City. She's lost her club to Oswald Cobblepot, and now Falcone is helping him transform the place, possibly into the Iceberg Lounge, Penguin's famed club from the comics. In another clip released in advance of "The Scarecrow" episode, Falcone, studiously avoids any questions of mob loyalty and points out ways that the place might be improved with a little switch from "Fish" to "Penguin."

But Falcone's reasons for wanting the club to get a makeover are pretty sound. Fish spent all of her time at that club. She was constantly auditioning new acts, making sure everything looked perfect, and even hung out there to meet up with cops in order to buy their loyalty. If Penguin can't replicate the same kind of results, and fast, then those customers will dwindle. And if they lose the money to make it a legitimate business, then they lose their in with the non-criminals in Gotham City. Penguin ultimately becomes Gotham's biggest club owner in the comics, but he's green — I'm thinking a desperate Falcone might end up giving Fish a call pretty soon begging for her business advice.