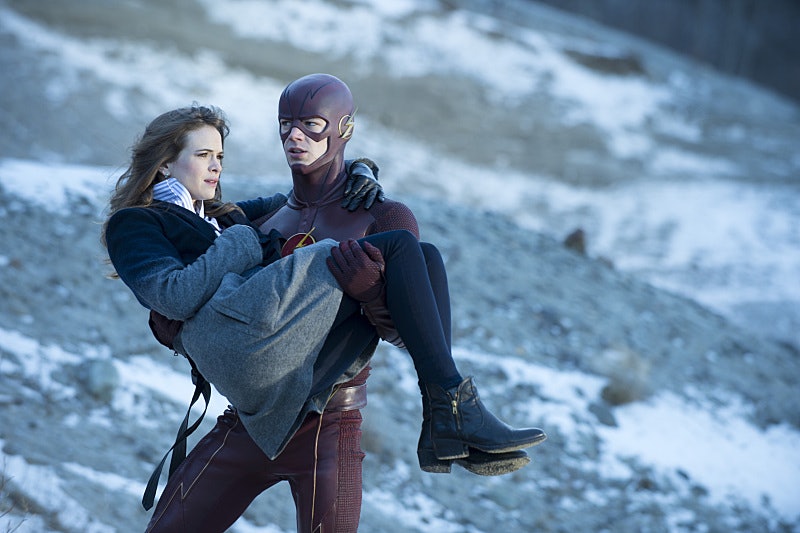 If you thought 'shipping Olicity was a full time job, just wait until you start hearing about the newest 'ship out of Central City, SnowBarry. It's one part Barry Allen, one part Caitlin Snow, resulting in a pairing that could make The Flash even better. Barry's been rejected — but in a nice way — by Iris West, and Caitlin is still reeling form the loss of her fiance, Ronnie Raymond. What better way for these two to come together than over shared heartbreak? Besides the fact that they're already adorable together, the two can help mend each other's broken hearts. A romantic relationship may not be in the DC Comics canon, but SnowBarry is what I want to see on The Flash .

We know the two of them are already pretty good friends, considering the countless hours they spend holed up in S.T.A.R. Labs together trying to save Central City. After last week's episode "Crazy For You," we know there's a little bit of flirtation going on as well. However, there should be a LOT of flirtation going on. Sure, the two of them start their big night out as strictly platonic friends, but you can tell that there's something simmering under the surface there.

On one hand there's Caitlin — who already seems to be a little bit smitten with Barry — a serious scientist looking to add a little bit of fun in her life. Let's be honest, Caitlin doesn't appear to have a whole lot of excitement in her life. What she does have comes from hanging out with Barry, and whatever he happens to be doing in his Flash suit. We want Caitlin to be happy, and Caitlin wants to be happy, and it appears that things related to Barry/The Flash makes her happy.

Then there's Barry, who's still really busy pining away after Iris, no matter how much he tries to deny it. He needs to get over her, once and for all. It seems that Linda Park is moving into that romance territory with Barry, which is fine and all, but how long is she really going to stick around? Barry might start dating her in an attempt to get over Iris, and then realize that Linda isn't the girl for him either — Caitlin is.

It's in Barry's DNA to be a nice guy, and he's shown that on so many different occasions. Now he needs a nice girl to be with. It should be Caitlin. The two of them are both at a time in their lives where everything is strange and confusing. They both need someone to rely on — someone who's always going to be there, already knows all of their secrets, and accepts them for exactly who they are.

Oh, it's a good thing that Barry and Caitlin already know everything about each other, so it's not like that will be an awkward first date. And no, their first date wasn't out at the karaoke club — we're going to need something way sweeter to count as their real first date.

And for all those out there who believe that a Barry and Caitlin pairing isn't in keeping with The Flash's story, think about Arrow for a second. Come on, do you really want Oliver to end up with Laurel? No. Olicity all the way. Now Flash, give us more SnowBarry.