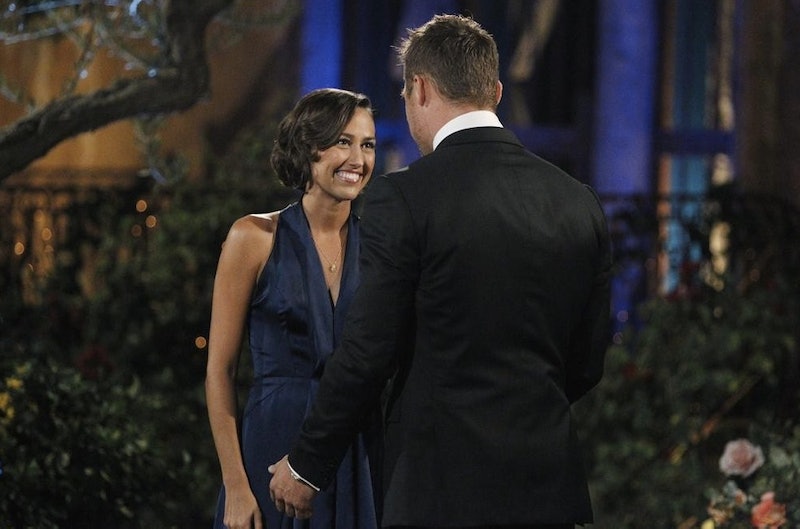 I wish I could tell you that when Kelsey finally was confronted by the other contestants on The Bachelor Monday night, I was totally surprised by the way she reacted, but I definitely was not. She responded to Whitney and Carly's concerns in the most predictable way possible: By acting like she was going to cry, immediately becoming defensive, and acting like she has never done anything wrong. In last week's episode, I hated her behavior, but I could deal with it. OK, so this girl is obviously here to play the game, I thought. She's pulling out all the stops and being dramatic for television. But this week? I'm officially stumped. After her most recent diatribe, something wrong is definitely going on with Kelsey.

The scene barely lasted a few minutes, and in those few minutes, she managed to condemn herself in every way possible. She noted that it was the first panic attack she'd ever had. She claimed that she doesn't remember ever insulting her fellow temporary roommates and acting superior. Kelsey, do you have a memory problem, or are you doing this all on purpose? This is The Bachelor, so we've seen people act crazy, but this is next level stuff. I mean, I watched Jason Mesnick as he dumped his original choice on After the Final Rose. I've seen Tierra LiCausi have a major meltdown on Sean Lowe's season. But none of this even comes close to touching the enigma that is Kelsey.

I mean, yeah: She's being ganged up on by the rest of the group, and whether the rest of the group is right or not, ganging up on your romantic competition isn't exactly nice. That's an awkward situation, even for a mean girl. But then, she figured out why the other girls don't like her: She's too smart. That was her response to them accusing her of insulting them repeatedly.

Yep. She actually said that.

"I get it," she said. "I am blessed with eloquence, and I'm articulate, and I use a lot of big words. Because I'm smart."

You do use a lot of big words, Kelsey. That part is true. I'm not sure that it's because you're smarter than everyone else, though and I'm not sure people only think you're insulting them because your vocabulary is too big (especially since you just feigned a total memory blackout and switched to this excuse when that didn't take).

For Kelsey's sake, I'm hoping that she's a paid actor or that she's trying her best to make excellent television, because I hate imaging that intense, Disney-style villains actually exist.