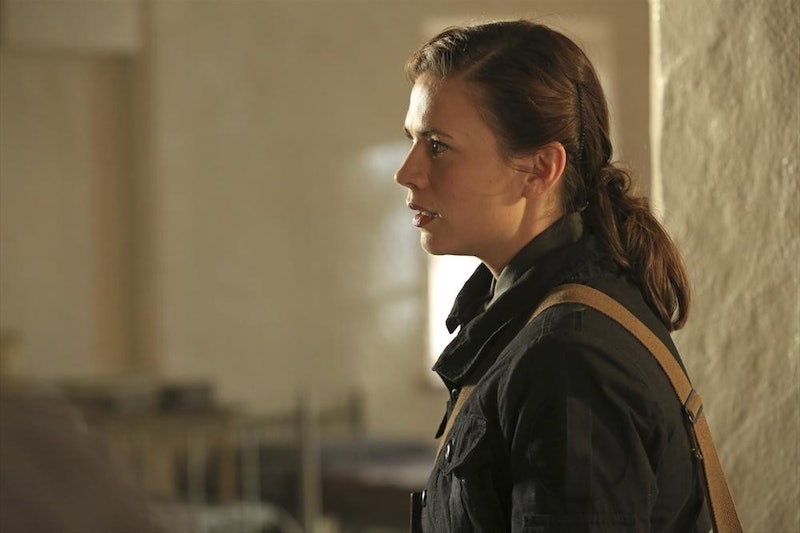 Steve Rogers is gone, but not forgotten, and especially not forgotten on Agent Carter. Though Captain America has presumably died saving the world, his memory lives on in basically everything Peggy Carter is doing. Peggy is working hard and fighting for a cause Steve definitely would have supported, and I know he'd be rooting for her as she stands up to her sexist co-workers. It's a surprise Peggy hasn't smacked Howard Stark around more, considering Howard had a vial of Steve's blood on Agent Carter. It was one of the things stolen from him, and thankfully Peggy (unknowingly) stole it back. Now Peggy has Captain America's blood, so what's going to happen with it now?

Peggy's got the vial safety tucked away in a crevice in her room — because obviously that's where you keep the really important Captain America super serum super solider stuff. And you know what they say, if you put Captain America's blood in the wall in the first act, it's going to have to be used by the third. What's the big plan for this blood, and what was Howard planning to do with it? What is Howard planning on doing with it? It's obviously pretty important, because it was the one thing he needed Peggy to steal back from the SSR. It's also a little unnerving, because, well, Howard has the blood of a presumed-dead Avenger. How? Why? Was Steve aware of this?

It's possible that Howard was planning on trying to replicate the super solider serum and inject others with it. The war might be over, but somewhere Hydra is just beginning — you can never be too ready. However, as far as we know through the rest of the Marvel Cinematic Universe, no one else gets that injection — unless we're talking about whatever the heck happened to Bucky Barnes, but I really don't think Agent Carter is going down that Winter Soldier rabbit hole. It it certainly possible, just very unlikely.

Here's a super crazy idea: Agent Sousa's injured, right? What happens if in some roundabout away, his condition gets worse, and the only way to save the day is to inject him with a little super blood? I know it does sound really crazy, but can you imagine the kind of toll that will put on Peggy? Steve's blood is basically the only tangible thing she has of his right now, and having to use that on someone else might completely break her.

But Peggy also knows that Steve would do whatever is needed to take care of others. Even though Peggy might not want to use the blood — whether on Sousa, or anyone else — that's what Steve would want. And you never want to disappoint Captain America, even after "death." Having someone actually use the blood would really send all our main characters on Agent Carter into uncharted territory. And like I said, the blood's in the wall, so it's gotta come out before Agent Carter wraps up. Even if it does mean that Peggy loses a little bit more of Steve.