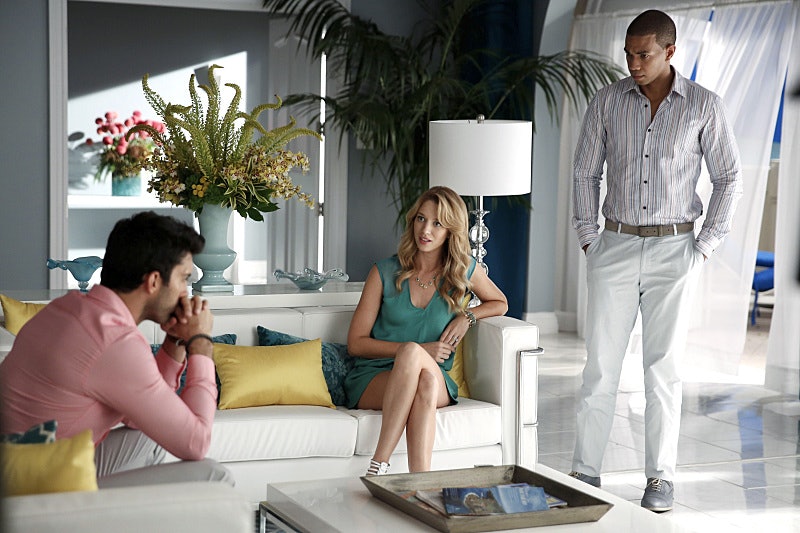 Ooooohhh no, turns out that Rafael is not just the cheesy-moment planning, devoted boyfriend he has been pretending to be on Jane the Virgin. In "Chapter 13," we found out that Zaz is still alive on Jane the Virgin and more importantly, Rafael is on it. Gah! Can't Jane have people not lying to her for once during this insane pregnancy? Roman Zazo (called Zaz) had allegedly died back in "Chapter 2" when he was impaled by the marlin ice sculpture at the Marbella. So, uh what was he doing alive and well in "Chapter 13" and why was Rafael so happy to see him?

Although I do have a soft spot for Rafael, I feel his relationship with Jane has been escalating too quickly. His best friend died quite gruesomely and publicly at his hotel, he found out his wife Petra was cheating on him with that best friend, his sister accidentally impregnated his employee with his sperm, he thought/thinks his father was/is a major drug kingpin, and he finally went through with divorcing Petra. That's not even all of the drama he has been facing and he managed to pretty seamlessly slip in (with a little resistance from Michael and Xo) to becoming boyfriend of the year to Jane. I know we are in a telenovela world, but dude has got to break down at some point — unless, he knows more than he has been letting on. And unfortunately, the latter is true.

"Chapter 13" of Jane the Virgin had a pretty solemn tone with Jane and Rafael finding out that their child may have a chromosomal abnormality. Rafael was perfectly supportive of the entire situation and Xo even acknowledged how much Rafael must really care about Jane. So, of course, when someone is being nice they must be up to something else (with the exception of Jane and the women in her family).

From the men's interaction at the end of the episode, it seemed Rafael sent Zaz on some sort of mission — and that there were no hard feelings to Zaz sleeping with Petra. And this makes me have a lot of questions like — who actually died at the hotel when we saw Zaz's body? Did Rafael know about Zaz and Petra for longer than he let on? Maybe he even pushed for the affair? And what the hell is Rafael up to?

Although Rafael may not be the bad guy, he's definitely a liar and much more complicated than he has been letting on. It makes me miss Michael. He is kicking some ass in the Sin Rostro investigation and once Jane finds out that Rafael has been lying to her — I think she'll be missing Michael too.