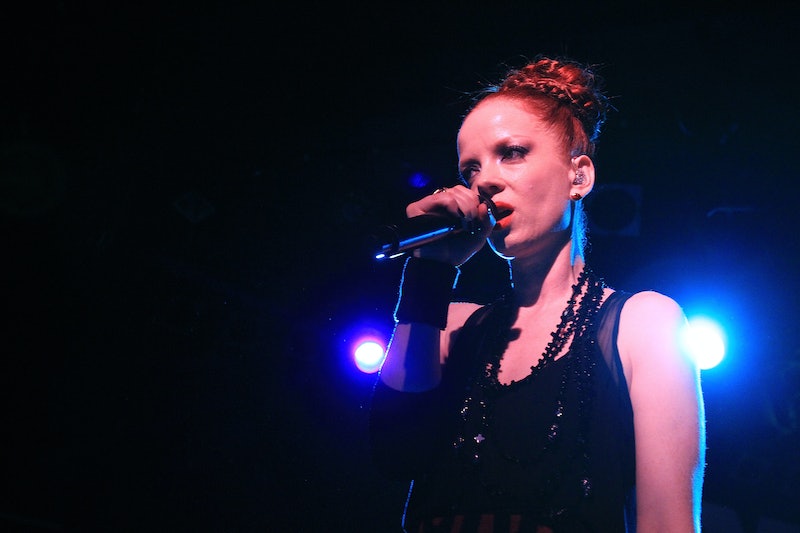 The 2015 Grammys were basically just a three and a half hour concert festival with a few awards thrown in there to recognize Sam Smith's talent, but the one big pop culture event that everyone walked away talking about was Kanye West pretending to rush the stage when Beck went to accept the award for Album of the Year — and the subsequent revelation that Kanye was not joking when he did it. Don't get me wrong. I, too, believe that Beyoncé's BEYONCÉ should have won Album of the Year and I will happily tell that to anyone who will listen, but I do it in the privacy of my own home and not by storming a Grammys stage and only stopping short of snatching the microphone out of Beck's hands because I have a daughter to think about. I mean, I'm not Kanye. However, Garbage lead singer Shirley Manson slammed Kanye for the Grammys stunt because being Kanye is no excuse for being "small and petty and spoilt."

"Dear Kanye West," the letter, written via Manson's Facebook, began. "It is YOU who is so busy disrespecting artistry. You disrespect your own remarkable talents and more importantly you disrespect the talent, hard work and tenacity of all artists when you go so rudely and savagely after such an accomplished and humble artist like BECK."

Even the most diehard of Kanye fans can't deny that Manson has a point. I've already pointed out the irony in Kanye declaring that giving the award to Beck was disrespecting artistry while in the midst of a long rant that disrespected Beck's artistry. I'm not saying that Beyoncé is not a phenomenal performer and singer. (In fact, I think I am physically incapable of typing or speaking those blasphemous words.) But I am saying that, despite the fact that Beck is not my cup of tea, he is just as valid an artist as Beyoncé and just as worthy of respect as Beyoncé — especially considering the poor man was polite enough to respond to Kanye's diss by calling him a genius and saying he also thought that Beyoncé would win.

Kanye doesn't help Beyoncé when he storms stages the way that he did at the 2009 MTV VMAs nor the way that he did at the 2015 Grammys. He doesn't help Beyoncé when he champions her cause by tearing down other musicians. Beyoncé is not about tearing other people down to make herself look good. She is about feeling her own shine to such an extent that you don't have to like her, you certainly don't have to love her, but you absolutely have to respect her for what she is out there doing musically. She is about building a community of artists that support one another, about feminist education, about loving her fans and her Beyhive as much as we love her.

Listen, I would go to war for Beyoncé just as hard as Kanye does, but the way in which he goes to war for her reflects badly on her and on himself. And, as Manson herself adds at the end of her letter, "I am pretty certain Beyonce doesn't need you fighting any battles on her account. Seems like she's got everything covered perfectly well on her own." I mean, she's Beyoncé. One side-eye to a hater and they shrivel into ashes where they stand, OK? So while Kanye might have said what many of us were privately thinking, and while Kanye is perfectly entitled to his justified opinion that Beyoncé is one of the best artists of all time, it's probably a good idea to start blocking him off from the stage at award shows unless he is presenting or has just won an award. Just like Taylor Swift before him, Beck did not deserve for his moment of victory to be overshadowed by something like this.