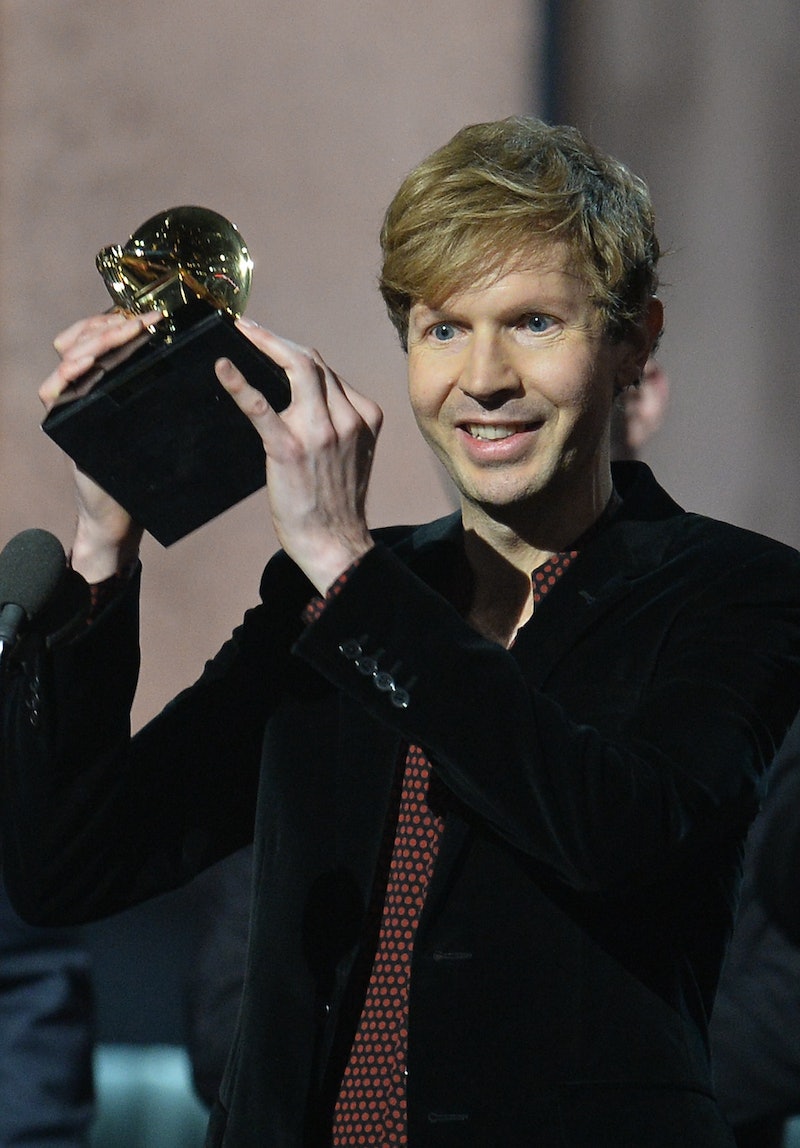 By now, everyone who tuned in on Sunday to watch the broadcast of the 2015 Grammys has heard that Kanye West dissed Beck for winning over Beyoncé in the Album of the Year category — a diss we should have seen coming when Kanye "jokingly" rushed the stage during the broadcast in a move reminiscent of his 2009 "I'mma Let You Finish" VMAs microphone grab. (Thankfully, Kanye and Taylor Swift have made amends since then, at least enough to stop to take a selfie during the Grammys.) While I might agree that Beyoncé should have won Album of the Year, I don't agree enough to ruin Beck's night by storming his stage and then dissing him over it. And how does Beck feel about Kanye's diss? His reaction was so classy that he might have just made a fan out of all those people trending "Who Is Beck" during the Grammys on Sunday.

US Weekly caught up with the rocker at the Universal Music Group after party and he easily responded to questions about the rant with the kind of humble enthusiasm the rest of us could only hope to emulate in his position. "I was just so excited he was coming up. He deserves to be on stage as much as anybody. How many great records has he put out in the last five years right?" He even went on to say about the diss itself: "You can't please everybody, man. I still love him and think he's genius. I aspire to do what he does."

And isn't that the truth. This is the second time that Kanye has stormed a stage on behalf of Beyoncé's honor, and about the 500th time he has made an inappropriate rant, but there can be no doubt that even the fans who are claiming that he has lost them forever are probably going to buy his next album. Why? Because Kanye's arrogance has always been, and likely will always be, backed up by the kind of musical talent that make it clear that he knows what he's talking about when it comes to music. Which is not to say that I agree that Beyoncé is a true artist and Beck is not — they're both true artists and the Academy certainly had to bear that in mind when trying to choose between them for the Album of the Year Grammy Award.

However, the audience is certainly allowed to be confused, bewildered, and even a little shocked that Beyoncé could lose out on that Grammy after the amazing year that she has had. Even though BEYONCÉ was released in late 2013, it still lives on so much in the hearts and minds of the people that it was the clear favorite to win in that category. The last thing I want is for anyone to take this opportunity to diss Beck, who deserved that award as much as anyone else who was nominated, but, seriously, even he thought Beyoncé should have won. "I thought she was going to win," he told US Weekly. "Come on, she's Beyonce!"

Kanye's comments were uncalled for, something that has to be said whether you're a fan of Kanye (or Beyoncé) or not. As a public figure, Kanye has a responsibility to the people who look up to him to be a little more cautious in the way he expresses himself than he displayed Sunday night. You can be a fan of Beyoncé and defend Beyoncé's music without stating that, "When you keep on diminishing art, and not respecting the craft and keep smacking people in the face after they deliver monumental feats of music, you’re disrespectful to inspiration," as if Beck himself had not delivered his own monumental feat of music. Ironically, in saying that, Kanye himself was diminishing art — Beck's art.

As for Beyoncé, well, she took home the Grammy for Best R&B Performance with "Drunk In Love," (as well as several others) she gets to be the mother of Blue Ivy, and no one has asked her yet what she thinks of Kanye's words or stunt during and after the ceremony on Sunday. For that alone, she's winning. How about we all collectively decide to let Beck enjoy his Grammys win in peace regardless of whether or not we believe that Beyoncé had the best album of all time?