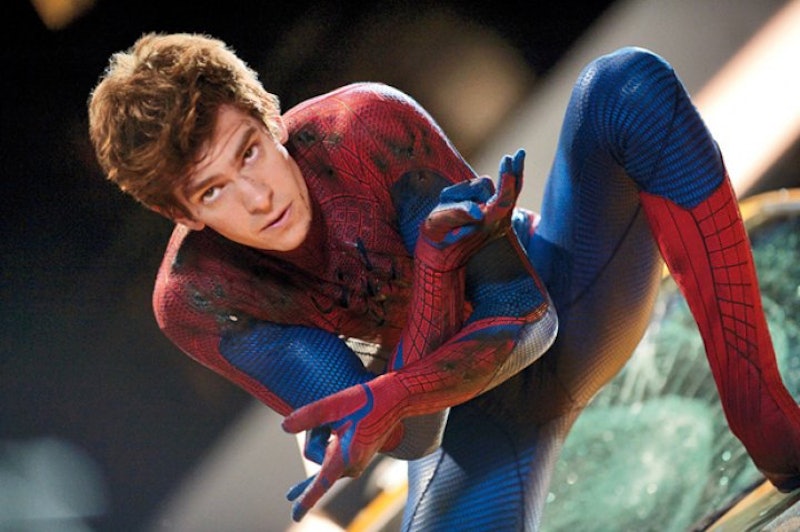 By now, you've probably heard the big news: Spider-Man has joined the Marvel Universe, in a long-awaited deal announced by Sony (who currently owns the rights to the character) late Monday night. If you're not up on your superhero jargon, this means that Spidey will now fight crime alongside Iron Man, Captain America, and the rest of the Avengers in Marvel movies to come, as well as receive a standalone film set for 2017. It's a major deal for both companies, and not just because it means four films are getting pushed back. With the new Spider-Man movies comes a new Spider-Man actor: Andrew Garfield, our current masked crusader, is getting the boot.

The switch-up is not a huge surprise, considering Garfield's already 31 years old (practically elderly by superhero standards), and that the last Spider-Man movie he starred in is was the lowest-grossing film in the entire franchise. Still, it's sad news for those (ahem, me) who thought the actor was perfect for the role. On the other hand, losing our old Spidey means getting to dream-cast the new one, a task that's never not fun. Below, nine people I think could be the next amazing Spider-Man (pun completely intended):

Sheridan, an 18-year-old best known for the acclaimed indies Mud and The Tree of Life, is a hugely talented actor who could use a big, mainstream break. He looks the part, would be the right age for a film shooting a few years down the line, and would generally be an awesome Spider-Man. The only problem? He's set to play a young Cyclops in 2016's X-Men: Apocalypse, a franchise based on Marvel characters, which might be a bit too much crossover in the superhero genre.

Kodi Smit-McPhee looks like a young Andrew Garfield, but even without the physical resemblance, he's a solid choice for the part. The Dawn of the Planet of the Apes star he's a skilled actor, is no stranger to big-budget movies, and, like Sheridan, could use the career boost of superhero stardom.

Having just come off a major franchise, Hutcherson as Spider-Man is definitely a long-shot. Still, I can't help but hope the adorable, underrated actor is at least considered.

The Perks of Being a Wallflower star has already played a superhero once, in Percy Jackson, but taking on Spider-Man would be a whole different ballgame. I think he could handle it just fine.

Freddie Highmore is the kind of actor who's hugely respected in the industry, yet hasn't managed to reach that same kind of recognition with audiences. It's not for lack of trying, though; the SAG-nominated 22-year-old stars on Bates Motel, was the Charlie of Charlie and the Chocolate Factory, and helped elevate Finding Neverland to Best Picture status. Let's give him a role that'll finally make him a household name.

Like with Glover; he's not the "typical" choice for Spider-Man; like with Glover, who cares? Enoch, a breakthrough star of How to Get Away with Murder, deserves a role that'll put him even further into the spotlight.

Marvel hasn't said how old they plan to make the new Spider-Man, so there's no reason an actor in his late '30s couldn't take the part. And if it's going to be someone that age, why not have it be Tobey Maguire, Spider-Man original and actor in desperate need of a major comeback? Give the guy his costume back.

This brilliant idea comes from @BittrScrptReadr, and it's perfect. Screw convention, make the talented, badass, incredibly cool Blunt the new Spider-Man. Casting a woman would gain Marvel back the cred it lost for pushing back Captain Marvel, plus Emily Blunt as a superhero would just be an amazing choice. Do it, Marvel. Do it.