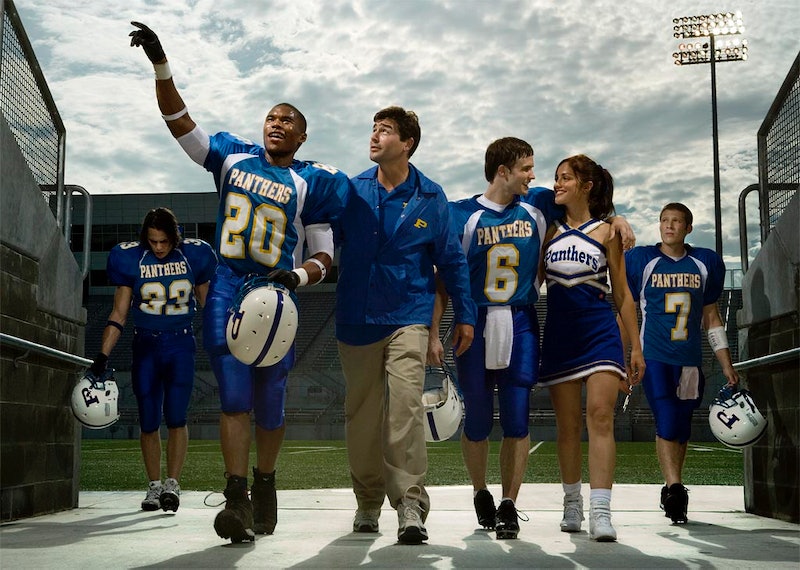 There are few shows as universally beloved by critics and fans as Friday Night Lights. The inspiring drama about a small town in Texas where high school football is religion and the hopes and dreams of an entire community rest on one man was more than just a show about sports — it was about love, overcoming seemingly insurmountable challenges, and the importance of character. Not only is Friday Night Lights memorable, it's oh so very re-watchable. Though the second season amidst the infamous Writers' Strike of 2008 was sub-par in comparison to the rest of the series — spoilers, especially when they glazed over that whole Landry and Tyra hiding a murder thing — the show is brilliant from start to finish. Even from the very start, the pilot episode, Friday Night Lights is compelling in a way that so few series can achieve. It's just got so much heart, and you believe in it.

I watched the Friday Night Lights pilot again and saw just how fast out of the gate the show arrived. From the opening scene, the creators paint a vividly clear picture of just how seriously the town of Dillon, Texas takes its football. Radio commentators argue over the staying power of the new head coach Eric Taylor, and they fantasize about the big future ahead of star quarterback Jason Street. The pressure is on, the stakes are incredibly high, and the show never loses its momentum. Here are all of the gems I picked up from watching the pilot, in all of its "Texas forever" glory.

The Motto Wasn't How You Remember

We're used to Coach giving us "Clear eyes, full hearts," and having the team finish with "CAN'T LOSE!" However, in the pilot, Coach gives us the whole line and the team simply echoes the last part. That changed in the second episode, and in every episode thereafter. It's just more powerful that way.

Tami Was Almost A Redhead

Connie Britton was way, way strawberry blonde in the pilot. She went on to have Tami Taylor's signature dirty blonde curls for the rest of the show. Speaking of hair...

All Of The Young Women Had The Same 'Do

All Of The Guys Had The Same 'Do, Too

Other than Riggins' devilishly sexy, long, dirty hair, all of the fellas — including Matt Saracen, Jason Street, and Landry Clark — had the same bad Clooney/Caesar knock-off haircut. Ick.

Tyra Had the Worst Come-On In The Show's History

While at a Buddy Garrity dealership hoopla, Tyra tries to get Street to stray, claiming that having the same thing over and over again can be boring, like drinking a glass of milk every day with every meal (Lyla, ahem ahem). Then she says, "You gotta try a milkshake every once in a while.” Euphemisms!

The Pilot Is Littered With Foreshadowing

In the opening sequence, the camera drives past Saracen's house with his #7 Quarterback sign on the front lawn. The first time we see Saracen, he's straightening the sign so that it stands upright — a clear indicator of what's to come by the end of the episode. The radio announcers comment that Coach is "going to play Street too hard" in the upcoming game, foreshadowing his tragic injury. Riggins also says in his interview with local press: "I just like to hurt people." You can say that again, you girlfriend-stealin' criminal. (I still love you!) Tami also urges Eric to consider moving, taking a new position in Alaska and finding a bigger, better home. From the very first episdoe, we are primed for the changes and struggles our favorite characters face all the way through to the series finale. That is some mighty fine writing, if you ask me.

SERIOUSLY, HAVE YOU AGED A SINGLE DAY? He must have studied at the Paul Rudd School of Charm.

The Pilot Doesn't Have Opening Credits

The theme song by Explosions in the Sky appears about 2/3 through the show. However, the sweeping opening credits and title do not appear in the first episode.

The Pilot Is Broken Up By Days

The show has small title screens for each day of the week leading up to Friday. This structure gets dropped early into the first season.

Smash Has A Fake BFF

In his press interviews, Smash comments that he and Matt Brown are going to take the team all the way to state and go to Pasadena together. This character never appears in the show. Perhaps it was a character that the writers were going to include before they realized that Riggins, Saracen and the Smash were already too much for this world!

There's A Pee Wee League That Look Like Mini Panthers

Jason Street gives a pep talk to the little players and there's a mini Riggins, a mini Saracen, a mini Smash, and a mini Street. PRECIOUS.

Taking a page out of the Britney Spears Book of Early 00's Fashion.

The Medical Timing Of Street's Injury Is Lightning Fast

They paramedics diagnose a spinal injury on the field and, by the time the game has finished, Street has already had his surgery and is laid up in his hospital bed. ARE YOU KIDDING ME? An invasive and highly delicate surgery like that would take hooooooooooooooours.

Coach's Speech Is Saved For Last

The first of his many famous inspiring speeches isn't given in the locker room; it's placed over a sequence of players and friends at the hospital waiting for news on Jason Street. This style was also ditched after the pilot, but, for dramatic effect, it sure did its tearjerking job.

The Soft Side Of The Panthers Is Never Stronger

Sure, Riggins and Smash hate each other in the pilot, and the show demonstrates how highly the physical prowess and aggression of the players are regarded, but the pilot also does a brilliant job of displaying how sensitive these young men are. When the game starts again after Street is taken away, Saracen, Street, and Smash hold hands as they walk back on the field together. When the game finishes, Smash leads both teams in a somber and beautiful prayer in the middle of the field. For all of their cockiness and macho attitudes, the pilot brilliantly displays their humility and vulnerability. It's why we all love this show so much.