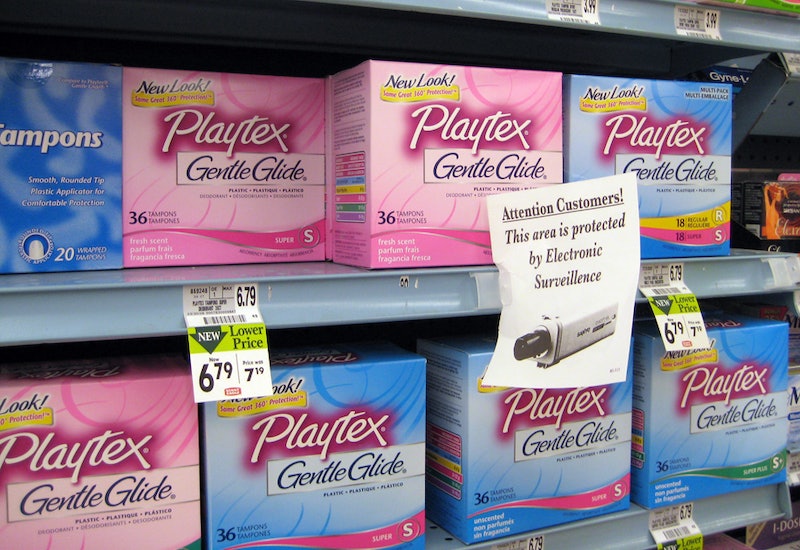 I'm going to start this post with a warning: It concerns a video from comedian Cameron Esposito highlighting what might possibly be simultaneously the grossest and greatest period joke of all time. If you're squeamish, TURN BACK NOW. I MEAN IT. Here there be monsters, and they are both bloody and graphic. They're also, however, absolutely hilarious — so if that sounds like your comedic cup of tea, come on in! The water's fine — if, y'know, a little messy.

Esposito herself sent the video, which features a recent standup routine she did at the Upright Citizen's Brigade, to Jezebel, who were justifiably skeptical at first; as Mark Shrayber put it, “I am usually skeptical of people who refer to their jokes as 'the greatest' of anything.” However, as Shrayber found, Esposito miraculously wasn't exaggerating. But you know what the best part is? It's not just grossness for grossness' sake. Like all good comedy, Esposito's joke makes an important point — and the fact that it's riproaringly funny at the same time just drives it home all the more.

Companies like Hello Flo have recently been making an effort to normalize and destigmatize periods; in spite of these efforts, though, menstruation is still mostly taboo. And you know what? That's effing weird. By and large, conversations about periods take one of two forms: They're either not happening at all, or they're happening in the same kind of realm that gave birth to that weird blue fluid used to represent them in menstrual pad commercials (that is, they're tiptoed around like something to be avoided). Espositos's take on it, however, is totally balls to the wall: Let's do the unthinkable. Let's talk about periods — but not in the mystical, rainbows-and-unicorns, blue fluid kind of way in which public discussion of them is usually limited. Let's talk about all the gory details, because only then can we come to terms with the fact that yes, we have them, yes, they're messy, and yes, they're a perfectly normal part of life.

Esposito's routine begins with something curious that began happening to her about six months ago: She was struck by the overwhelming urge to have a baby. As a lesbian, Esposito says, she's never once had a pregnancy scare; if she did actually have a baby, though, it would mark — in her words — “the first time in my life my period isn't totally fucking useless to me.” Here, of course, is the opening the joke is looking for: OMG, we're talking about periods? In public? On stage? Gasp! How disgusting! And you know what? Esposito's right — they are gross, but not in a “What? Women menstruate? Nonsense!” kind of way. They're not gross as an idea—they're gross when you're having one and trying to deal with the fact that bits of your body are expelling other bits of your body over an extended period of time.

Here is a small selection of the extremely colorful metaphors Esposito pulls out in an effort to explain exactly what a period is like to someone who has never had one:

She's right. If you're not prepared or somehow lost track of where you're at in your cycle, sometimes it can be like a surprise visit to the set of CSI… in your pants. Fun, right?

OK, so Esposito doesn't exactly say that it's like the Hulk — but her description is, in fact, rather Hulk-like: “My body…. is smashing my body... out of my body... using my body!” It's a pretty impressive display of force when you think about it, is it not?

Yeah. Large ones. Ones that are approximately the size of…

A non-organic, pesticide-ridden, grocery store strawberry. If you packed strawberries in your lunch today…

But again, all this grossness? We need to talk about it. We can't just hide it behind closed doors anymore. It's time the entire world came to terms with these basic facts of human anatomy — no matter how colorful they are.

Watch Esposito's full routine below. The period joke kicks in around the 4:30 mark, so skip ahead if that's all you're interested in; the whole thing is pretty damn funny, though, so if you've got the time, I'd recommend sitting through all seven and a half minutes. Just make sure you're somewhere you can laugh with abandon before you hit play: