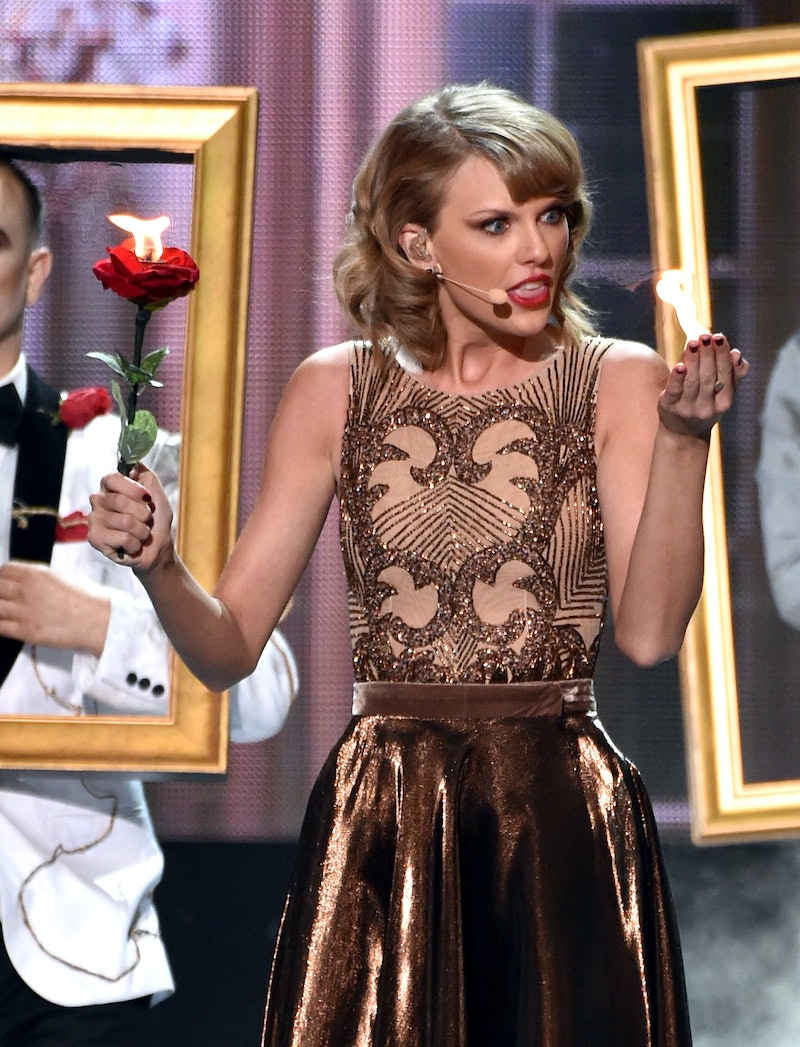 Looks like Taylor Swift is reinventing herself into a nihilistic anti-hero with a speckled past a lá Rust Cohle. Given that a teaser for Taylor Swift's music video for "Style" looks like the True Detective intro, this is my best guess at what's going on with her. After all, time is a flat circle, and such.

On Tuesday afternoon, Swift teased a clip of her newest music video via Instagram, announcing that the entire vid will be released on Friday, Feb. 13. In the clip, Swift appears in profile as white smoke fills her neck and face. She stares off into space in a way that can be described as either brooding, contemplative, or BOTH! When I took a gander at it, my first thought was, "Hmmm... I've seen this sort of eerily ethereal and somehow foreboding image before.... BUT WHERE?!" And then it clicked! This is basically the True Detective intro!! GAHH! Taylor Swift is Marty Hart in the opening title sequence at the moment that his head fills up with a clouds and/or jellyfish. IT ALL MAKES SENSE!

Does this mean that Swift's latest video will be an homage to neo-noir-ish detective shows? Will it be set in the hellish nightmare-land of Carcosa? Will there be some HORRIBLE reference to "making flowers?" Take a look at the clip and judge for yourself. Please, play with "Far From Any Road" by The Handsome Family (aka, the True Detective theme song) provided below for maximum enjoyment.

It actually works REALLY well on loop. And now, just to prove my point, check out the intro at about 28 seconds in, when Marty Hart is full of sea life and vapor.

Am I right, or am I right, people?! I guess Swift's a legit fan, and most likely had VERY STRONG opinions on who should've been cast in Season 2. Just humor me for a little, while I imagine the True Detective references that may show up in "Style."

That would be a fun concept for a Swift video! Macabre murder mystery in a depressed Southern town.

Perhaps as a nod to Swift's country music roots, she'll pop some Texan beer in there somewhere. Preferably, she will be drinking said beer out of a big hug mug.

'Cause at the end of the day, the record sales and cases closed don't mean anything if you don't have someone down in the trenches with you. Just ask Marty and Rust.