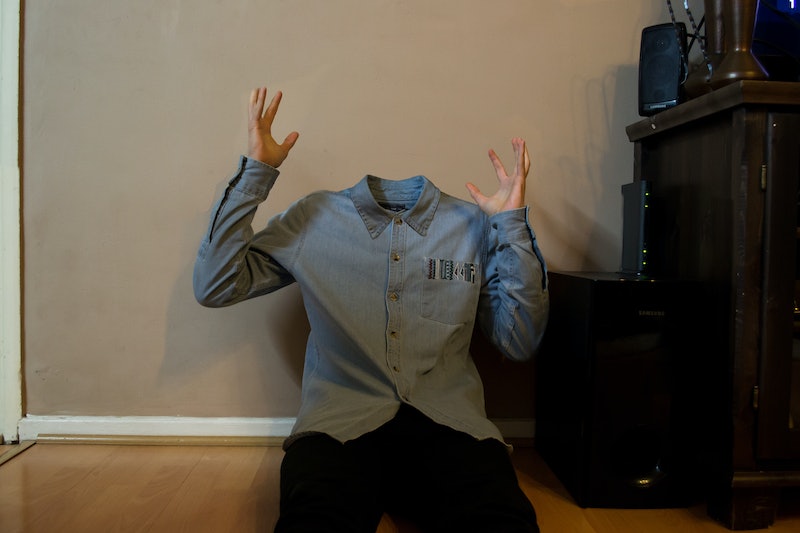 Every few months, when I feel either particularly good or particularly bad about how my life is going, I start looking up my exes online. Most of you are probably familiar with the slow burn of this process: It all starts with an innocent "I wonder how X is doing these days," and ends in you making cruel and random assertions about the life they've developed in your years apart. (Ooooh, look who's into the farmer's market now! Aren't you healthy!)

At this point in my life, I'm actually friends with very few of my exes (most of them fled my life when I met my current boyfriend and they realized that they no longer had a crack at banging me when I was drunk). But my regular online check-ins serve a purpose in my life besides schadenfreude (although that's obviously most of it): checking in on exes that I'm no longer really in contact with allows me to play a little choose your own adventure game with my own life.

Being able to follow all the steps of my ex's life since we broke up and say things like, "Good thing I didn't stay with him, he gets eaten by a crocodile/really into hot yoga on page 87," soothes me into believing that everything in my life has unfolded properly, exactly as it was supposed to. It makes the world feel less crushingly complex, its endless options less overwhelming. I also find it helps me stay committed to my man, because those exes are sure posting a LOT of photos from Bonnaroo.

Except for one ex, that is. Chris, my very first boyfriend.

I could look at the LinkedIn profiles of the last three guys that I had casual sex with any time I felt like it (Gabrielle Moss has endorsed you in the following skills: Penis!), but I could not even find out the most basic elements of my first love's life. Was he dead? Was he happy? Had he ever finished college? Did he have a new girlfriend? Was he still getting in trouble? Did he ever ... miss me?

We had, in most ways, a pretty traditional relationship. We met my freshman year of high school, and dated through my freshman year of college, when he moved in with a girl he met at his job at Stop 'N' Shop while I was on vacation visiting my grandparents in Florida (for real).

In the years in between, our relationship followed the same outlines of first love that the past few generations of teenagers have — we told each other that we loved each other, we lost our virginity to each other, we experimented with mature adult coupledom as only two teenagers who didn't have their own cars and had to time their sexual activity around their parents' trips to the grocery store could.

But when Chris and I split up in 2001, our break-up followed the traditional "I'm never speaking to you again" narrative. Chris and I broke off total contact in the fall of 2001, the year I joined my very first social network (Makeoutclub, for any of you who were making duckface through your emo bangs in the early aughts). Chris didn't. I joined more and more social networks as they came up, started blogs, made joke websites with friends; Chris didn't. I left a larger and larger web footprint; Chris didn't. The email address I had for Chris in 2001 bounced back a return-to-sender notice by 2003. I don't even have a digital photograph of him.

After I moved to New York City, everyone I met, from potential dates to potential employers, was Googleable, Facebookable, or liable to have at least one or two embarrassing Livejournal entries mouldering around the web. But Chris remained MIA. For years, the only thing I could find online about him was a 2002 police blotter report from the small town where we both went to college. Apparently, in the wake of our split, he had gotten arrested for peeing in an alley while drunk.

But aside from that, Chris' Internet presence was as plain and untouched as a fresh snowfall. I didn't realize until a few years later, when I had a few more exes under my belt, that my post-relationship relationship with Chris was going to be different than what I had with the rest of my exes.

I could look at the LinkedIn profiles of the last three guys that I had casual sex with any time I felt like it (Gabrielle Moss has endorsed you in the following skills: Penis!), but I could not even find out the most basic elements of my first love's life. Was he dead? Was he happy? Had he ever finished college? Did he have a new girlfriend? Was he still getting in trouble? Did he ever ... miss me?

Not so long ago, this was pretty much what all break-ups were like. But among my friends today, I was alone. I was the only one who couldn't offer a hilarious brunch story about my high school boyfriend's ridiculous wedding photos or creepy emails he'd sent suggesting that we "get coffee." I mean, I still had my memories, but it was almost like my first relationship never existed.

Of course, there's some cache these days to not having a social media presence. A lot of celebrities, like Jennifer Lawrence and Kristen Wiig, make a point of noting that they're not on any social networks (even though being famous is basically the original being on Instagram). Regular people, too, have quit social media, in response to Facebook's invasive privacy policies, or concerns about photos effecting their future work prospects (surely you, too, have experienced the dramatic "I am leaving Facebook, call me if you want to have REAL GENUINE MEANINGFUL INTERACTIONS" post).

It's so unusual not to have a digital footprint that I went through a period of about three years where I was actually convinced that Chris had to be dead, just because nothing had turned up about him on the Internet since 2002. Who just vanishes that completely? Who could manage to?

In 2009, I sent his sister what I thought was a fairly polite email asking if Chris was dead. She sent me a reply that made me understand that there is no polite way to ask a person you haven't even seen in 15 years if their sibling is dead. She told me that Chris was alive, living somewhere in the Midwest, and asked exactly was I so curious now.

The email made me feel dirty for having asked. Why did I think I was entitled to information about Chris's life, anyway? Would I have felt like I could write his sister an email asking if he was dead if there wasn't any social media, and I just hadn't talked to him since we broke up, like millions of past former high school sweethearts in the world? Why did I think I had a right to his information?

Last year, on another of my ex-based Google runs, I finally got another hit on Chris. Like the one I had found ten years earlier, this Internet thumbprint was involuntary — another police report, this one for a DUI arrest. Digging deep into the online arrest record like it was a Facebook profile, I learned perhaps more about Chris than I would have digging through a bare bones social media presence. I found out that he still lived in the small town where we went to college (where the road he was busted on was located); that he was still close with his best friend from high school (who was named as the passenger in the car); that he still at least nominally lived with his family (their home listed as his address).

I started telling myself the choose your own adventure story of a future where I had stayed with Chris, where I was in all likelihood married to a guy whose life seemed to have been frozen in amber since 2001. But it didn't work. It's easy to tell yourself those stories using Facebook, which highlights what everyone thinks of as the high points of their life; but I didn't know if Chris was happy, sad, married, single, or into Scandal. I couldn't piece together a story from Chris based on two arrest records, spaced a decade apart — except that he was someone who had been arrested twice.

Though lots of people bemoan living in a culture where your exes are never really gone, I think it serves a purpose — and not being part of it leaves you strangely out of step with everyone around you. No matter what reasons we give, we stay in touch with (or at least check out) our exes online because when you spend time with someone romantically — whether over the course of five years, or one passionate night after a comic-con— they become a part of your own narrative. Following the threads of their continued life is more than narcissism or schadenfreude; it's part of how we figure out and assess our own life story, reflect on the person we've become, and examine the other people we have been and could have become.

I don't know that my life is any worse for having my first love's life pretty much lost to me. But I do know that everyone we've ever loved becomes like a branch on the tree of our life; and having one branch — the very first branch you ever grew —snapped off in the middle feels strange. I just have to accept that this section of my book is full of blank pages, and, I suppose, trust that I chose the right adventure anyway.