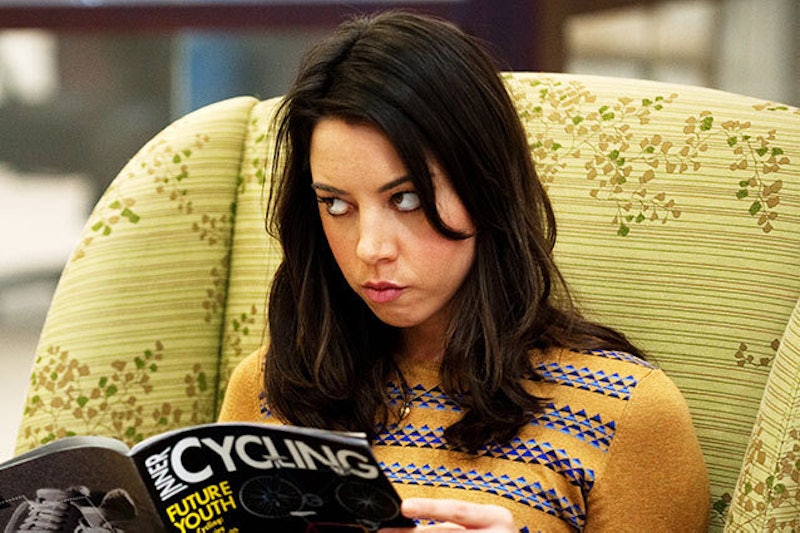 A weird thing about being a woman is that you can just be going about your day, doing normal, boring shit, and inevitably, without fail, at some point (at least one point) in the day, some guy is going to misinterpret something you do or say, or some facial expression you make, or some accidental eye contact, and assume that that tiny thing is you sending him a signal that you want to have sex. It's the most mundane, frequently occurring manifestation of the underlying mindset of male entitlement to women, and it's a bummer. It's such a commonplace occurrence, in fact, that, by adulthood, almost all women have come to conduct themselves in public in one of two ways:

Now, I understand that maybe, if you've grown up as a man in this country, you might've been, through no fault of your own, subjected to some rather...skewed messages about what does and does not mean a woman wants to do sex on you. I'm only kind of mocking you here. I do get that growing up as a dude in America, you're bombarded with not only the undoubtedly antiquated advice about The Ladies from your male relatives (who, please don't forget, even if they're awesome men, developed their attitudes about sexual dynamics during much different times when attitudes about women were extra shitty), but you're also slammed with countless articles about "how to tell when a woman is DTF." That said, neither of those influences is really an excuse for lame sexual assumptions anymore—and they definitely are not excuses for trying to have sex with a woman who hasn't completely, unquestioningly consented to do so. You're a grown-ass man, with access to the internet, who has now spent long enough living within a culture where the conversation about consent and healthy sex politics has been going on for a while now. No excuse not to know better.

But in the spirit of making things perfectly fucking clear, and in the hopes that we, The Sex-Havers Of America, can look forward to a bright, steamy future of great sex (and great freedom to exist outside of our perceived sexuality when we choose to do so), here is a list of things that—despite what you might've heard—do not mean that I want to have sex with you.

(To be clear, any of these things might, in fact, be a sign that I want to have sex with you. Or rather, any of these things might happen in conjunction with my desire to have sex with you, and these could seem like flirtatious or suggestive acts when experienced in the context of me wanting to bone you. How will you know when any of the following is merely a benign interaction, and when it's part of someone trying to convey that they want to get up on you? Well, paying attention to another person with greater focus, and learning something about nuance is a great start. And if all else fails, ask.)

Okay, I've looked into this extensively, and can say with a comfortable degree of authority that in no language do the sounds made to form the world "hello" translate to any word that represents a desire for you to be inside me. Turns out, I'm probably just saying hi because I'm a well-socialized member of the human race, which is honestly more than I can say for anyone who interprets my "hello" as an invitation to sex.

Holding the door for you, or any other act of basic politeness

Sometimes it feels like women have to hide behind a permanent scowl and refrain from extending even the most basic good manners we were raised to have, lest someone read our civilized participation in society as an unflappable agreeability that will translate to unfettered entry to our bodies. No. This door is literally the only thing I'm holding open for you right now. Calm down.

Sitting next to you

Whether it's at a bar or on the subway or on my couch, me placing my body in close proximity to yours does not mean I wish to engage in the physical act of lovemaking.

Maybe there's something on your face. Did you ever consider that? Maybe what you've unilaterally decided is an instance of eye-fucking is actually just me being transfixed on a booger on your face. Joke's on you, booger face.

Uhh, I'm your server and this is a restaurant and I want a good tip. Please don't complicate this.

Giving you a compliment

When I say, "Hey, that's a great coat! Where did you get it?" I don't actually mean, "Hey, great penis! Will you put it in me?" Having good taste in coats is not something that makes me want to have sex with someone, but, incidentally, the ability to take a compliment well and not be presumptuous in your social interactions both definitely are bone-able qualities. Maybe instead of being opportunistic, just aim for being a quality human.

Bumping into you on the subway

There are about 400,000 people shoved into this tiny train car, and my clunky-ass snow boots make me walk like an awkward newborn pony, so if I take a little tumble in your direction on our shared commute, please believe it wasn't an attempt to seduce you.

Buying you a drink

Maybe we're out with a group of friends and I'm just being, ya know, friendly; Maybe you bought the last round; Perhaps you totally killed "Roses" by OutKast in karaoke just now. Whatever prompted me to buy you a drink, unless I hand it to you while saying, "This beverage is symbolic of my willingness to get naked with you and rub our parts together," you can generally assume it's just a drink.

Going on a date with you

If I go on a date with you, it means I want to talk to you, figure out if you're a cool person, interact with you in the same physical space to see if any chemistry exists between us, and judge you based on how nice you are to the bartender and how well you tip. Basically, there are about a million tiny steps in between deciding to spend time with someone socially and deciding to spend time with someone, like, vaginally.

Coming over to your house

Is there anything less sexy than someone inviting you over for dinner and a movie, and then arriving and realizing they have absolutely zero intentions of eating dinner or watching a movie? Like, I get it: I've consented to a more intimate dating context at this point, which does demonstrate a desire to understand you and your life in a more in-depth way, and is probably indicative of a certain degree of trust, and hey, maybe if we have a really fun time cooking and eating and drinking wine and laughing at all the same parts of Super Troopers, I'll been super down to clown. But nothing kills a lady-boner more that look of confused, deflated entitlement when you aren't immediately ready to jump into bed with someone who "thought you knew what "dinner and a movie" really meant." Barf. BYE.

If someone is kissing you, and you aren't forcing them to do so, and they seem super into, it means one thing: They want to kiss you. Kisses, unto themselves, do not imply consent for other kinds of physical contact.

Pretty much anything other than saying "yes"

Here's the thing about "waiting for a girl to say 'yes' instead of 'not no'" when it comes to sex: Getting express, clear consent from a partner before going for the gold doesn't have to be this awkward thing that disrupts the flow of the hookup. It's not like you have to take a sexytime break, call your respective lawyers, and draw up documents declaring that both of you, being of sound mind, do hereby enter into a contract to have mutually consensual sexual intercourse. It doesn't have to be like that. In fact, waiting to hear a "yes" can be incredibly hot. "Yes" doesn't have to be stated firmly and coldly, with a handshake while standing fully clothed in a well-lit room, after which you both remove your clothing methodically and proceed to engage in military-style sex (I mean, unless that's what you're into). "Yes" can be uttered in a breathless, excited, imploring way in the throes of making out like teenagers on the couch. "Yes" can and should, without a doubt, become the hottest word you can hear. And until you hear it, every other word, action, and glance from someone should just be taken for what it is. You know what they say about what happens when you assume things: You're an asshole who doesn't get to have sex. ¯\_(ツ)_/¯