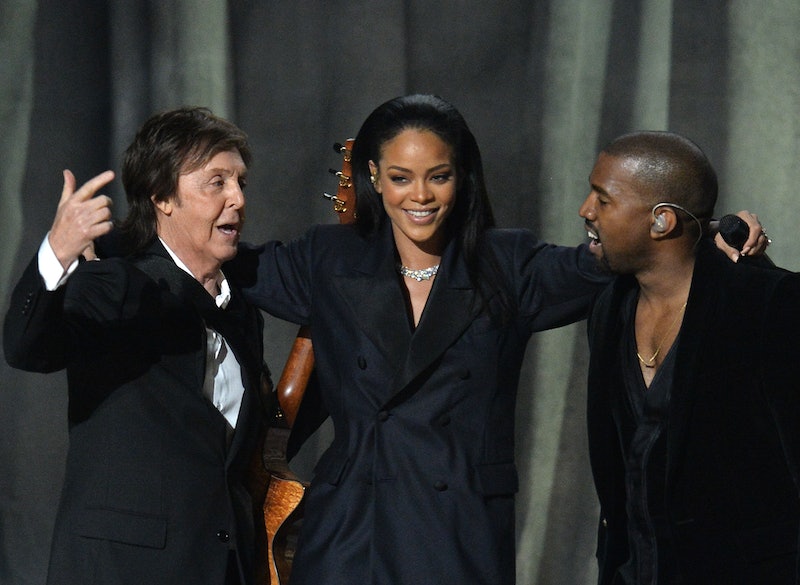 In Rihanna's latest song "FourFiveSeconds," her Bad Gal side threatens to come out swinging on anybody who dares to try her — but this fantastic a capella "FourFiveSeconds" cover will not only be the thing to help tame her rowdy temperament, but it should also meet the approval of her musical collaborator Sir Paul McCartney. (Kanye West on the other hand, may be a harsher critic — but, hopefully, he's too preoccupied with objecting to Beyoncé losing Album of the Year Grammy to Beck to have an opinion, or rant.) Anyway, the cover's by Chicago group Gentleman's Rule, and their less-is-more take on the laid-back song proves remarkably refreshing.

Obviously, covering songs is a risky business to begin with, but in this case there's the added pressure of putting one's own creative spin on a track crafted by three musical titans like Rihanna, McCartney and West. But thankfully, Gentleman's Rule have plenty of a capella covers under their belt, including everything from Adele's "Someone Like You" to a soothing yet almost unrecognizable rendition of Outkast's "Hey Ya."

The guys of Gentleman's Rule took a huge chance with their "FourFiveSeconds" makeover, but their version is pretty solid and even without instruments, the harmonies and overall vocal delivery bring a liveliness to the song that the original kind of lacks. (That's no shade to Rih Rih, though. In fact her Grammys performance was one of her best and she looked flawless as usual.)