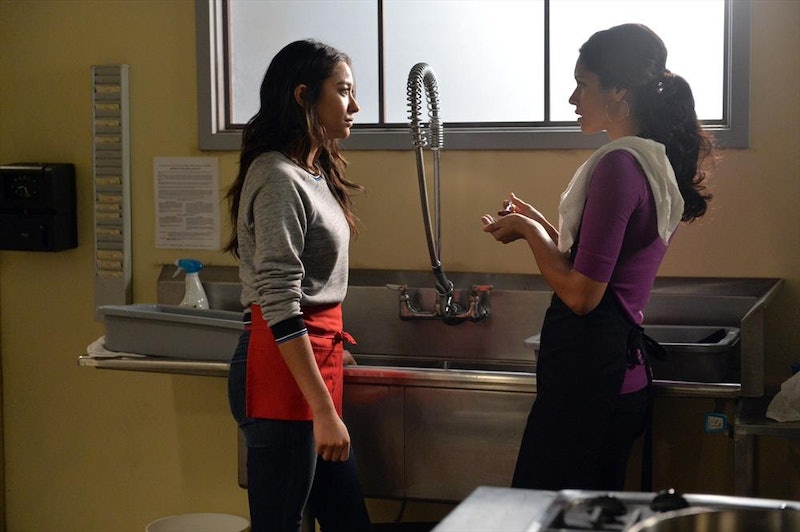 When a show features plotlines that include blackmail, corrupt cops, stalking, murder, and more intense subjects, romantic relationships can become extremely important. Fans need something light and hopeful to to latch onto when things get really dark. One series that has found the perfect balance between these two aspects is Pretty Little Liars, with Emily and Talia's burgeoning romance serving as the newest distraction from the turmoil the Liars are currently going through. Though they shared a kiss in last week's episode, we're not sure exactly where Emily and Talia are heading, but I just hope it's in a positive direction. Emily's past relationships all finished quite tragically, so no matter how much you may love Paily, you have to admit the show owes her some happiness. But will it actually give her any? In an interview with Bustle, PLL star Shay Mitchell expressed hope for Emily and Talia's future.

"I loved working with Lindsey Shaw so much, so it was kind of hard when I found out their storylines were going in opposite ways," Mitchell says of Emily's recent breakup with Paige. "But we’ll have to stay tuned and see what happens with Talia, because you never know what’s gonna happen in Rosewood." Right now, it seems that something is certainly going to happen. After Talia sent her some seriously mixed signals, Emily told Talia that she had feelings for her, and we last the potential couple happily kissing at the Brew, thanks to Jonny's secret-revealing machine.

As viewers have watched Emily navigate the various ups and downs of her relationships on PLL, Mitchell has portrayed the character through her wide range of emotions, so it's safe to say no one knows Emily better than the woman plays her. Soon Mitchell will put her on and off screen experiences to good use as she hosts SweeTARTs' dating show Get Roped In . When I ask Mitchell what dating advice she'd give Emily, she has one vital tip: "Go to a remote island so you would never have to be afraid of getting a text from 'A' or getting followed there," she says. "I think my advice for all of the girls is go somewhere very far away." It sounds extreme, but anyone who's stuck with the Liars for five seasons knows it's actually not that far-fetched.

Mitchell has a similar suggested "dealbreaker" for her character, "I don’t really know if you can get much worse than 'A,' to her, so I think everybody else is looking pretty great to Emily," she says, before adding one more important piece of advice that should be easier for fans to relate to. "Dealbreakers... I think somebody that didn't get along with her friends, you know? She has such a close-knit group of friends, and that’s kind of the same with me, you have to get along with my friends."

At some point or another, most of Emily's girlfriends have broken this rule, but as we got to know them, Maya and Emily both became beloved characters — to PLL fans as well as the Liars themselves. The unique nature of Emily's relationships with each of these characters is probably what makes it so hard for Mitchell to pick her own favorite pairing. "That would be so difficult to choose, because I’m such good friends with all the actresses that have played my girlfriends…Allllll of the actresses, because there’s been a lot," she laughs. "But I like them all for their own reasons. So I definitely couldn’t just choose one. I’m excited for all the relationships to come and I’m happy that I got to have all the relationships in the past."

Whether Emily and Talia will be one of those "relationships to come," we'll just have to wait and see.