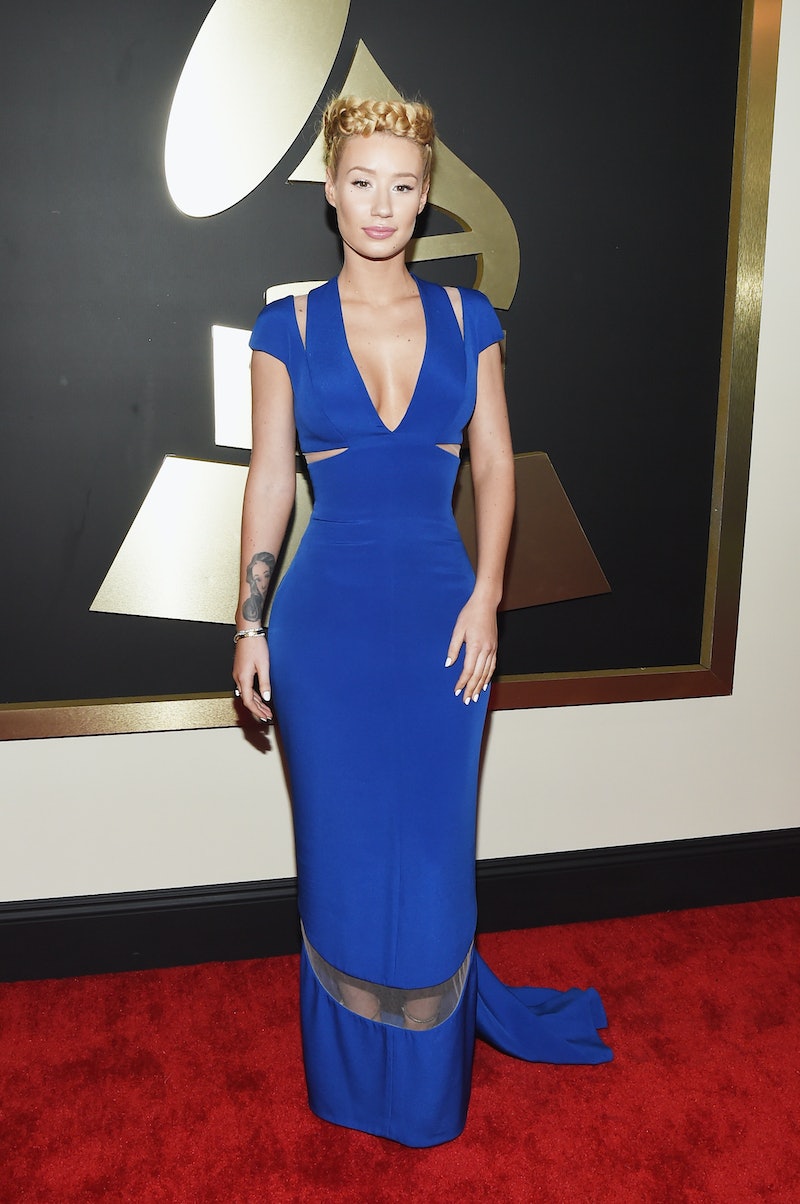 Australian rapper Iggy Azalea channeled her inner milkmaid with a crown of braids for the Grammys Sunday evening, a look she paired with an exquisite Armani gown made of all of her favorite things. While the royal blue floor length dress suited her fine, her hair quickly became the inspiration for countless Internet memes. Luckily, Iggy Azalea explained the Grammys braids to Us Weekly, shedding some light on the unusual coiffure.

“[I chose it] for simplicity,” Iggy told Us Weekly on the red carpet Sunday night. “And so I didn't have to wear extensions." Fair enough, I suppose, but that didn’t stop the Internet from dubbing her updo “the left shark of the Grammys.”

Iggy being Iggy, she took to her social media in response, blaming the laypeople for undermining her fashionable prowess. “I fucking loved my hair,” she wrote on her Instagram. “The world is full of basics.” I guess the new definition of "basic" is "person who doesn't understand Iggy Azalea's hair choices?"

Fashionista further inquired about the look in an interview with hairstylist to the stars Ursula Stephen (a detailed column for those curious about how the rapper’s hairs defied gravity for this particular style). When asked about its shared likeness to “a crown, or Heidi, or challah bread,” Stephen responded that she’s unphased by the Internet’s caustic response. “I'm a hair stylist, so I see things in shapes and illusions,” she said. “Kelly Osbourne's stylist [Ryan Randall] did an amazing french roll on her and then he put it next to a picture of a croissant, because it looked like a croissant. But it still looked amazing!”

The "Fancy" rapper has been experiencing a rough go of things lately, and her presence on social media isn't helping matters. Iggy ultimately lost the Grammy for Best Rap Album — a coveted prize she was expected to win — much to the relief of Twitter. Earlier in the day, Iggy was also the butt of an ongoing saga involving a Papa John’s delivery person who allegedly released her personal phone number to multiple friends, and to which Iggy responded publicly via social media. This follows up yet another social media controversy, during which the artist took to the Web to blast Steve Madden for releasing images from her collaboration with the brand without her consent.

Jordan Sarget over at Defamer has perhaps the sagest of advice for Iggy: “[D]efinitely throw your phone into the ocean. Lock yourself out of Twitter forever. For society's sake, certainly, but your own as well.” Seconded.