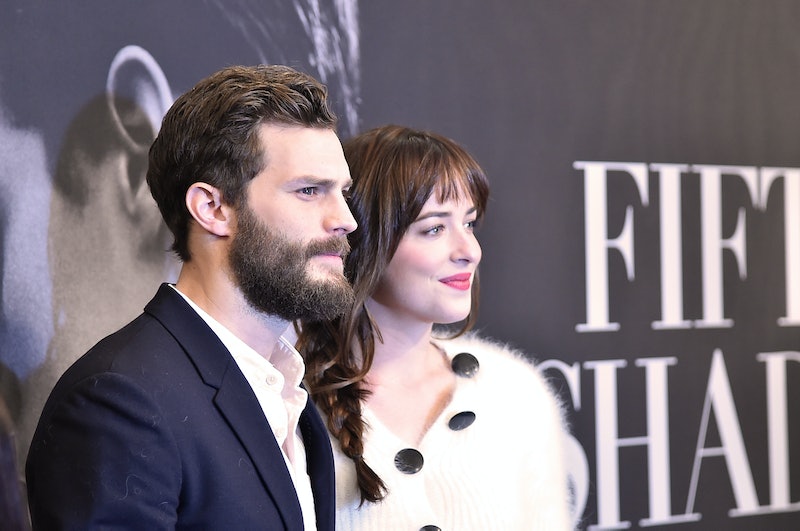 Unless you've been living on a different galaxy for the past, oh, year or so, you're probably well aware that 50 Shades of Grey is making its theatrical debut this weekend. Whether you're heading out to set the tone for a steamy evening (steamy, not abusive please), headed out with the girlfriends from your book club, or going to drink a bunch of wine and hate-watch the film, you're likely in for a surprise when you do see it. Costume designer Mark Bridges spilled a huge secret about Anastasia's sexy lingerie to Elle Magazine: There won't actually be any sexy lingerie. I was definitely in the latter category of people planning on hate-watching this film, thinking that at the very least I'd be able to feed my serious lingerie obsession with some gorgeous designer goods. So the news is kind of confusing.

Bridges told Elle that when it came to the plot, director Sam Taylor-Johnson pretty much wanted clothes on or off — with not really much middle ground requiring a full lingerie wardrobe. The underwear Bridges did get to use for the film was still luxurious — if not glamorous — though: "This is a classic example of Hollywood-ization: This poor college girl's cotton underwear is Hanro! But I suppose it's not out of the realm of possibility," he said in his interview. "That's the fine line with this whole movie, making it really interesting to look at but to also have it be believable." Bridges is an Oscar-winner, so I'm going to respect his expertise at his craft. But the reality is that this film is "reaching" on so many other levels. So why can't they just embrace the fantasy hollywood aspect and give the people what they want? By the people, I mean me, and what I want is indulgent lingerie. Don't wallow in the sadness, guys, but be prepared for the disappointment and plan to see some Fifty Shades -inspired lingerie on your own hot bod instead.