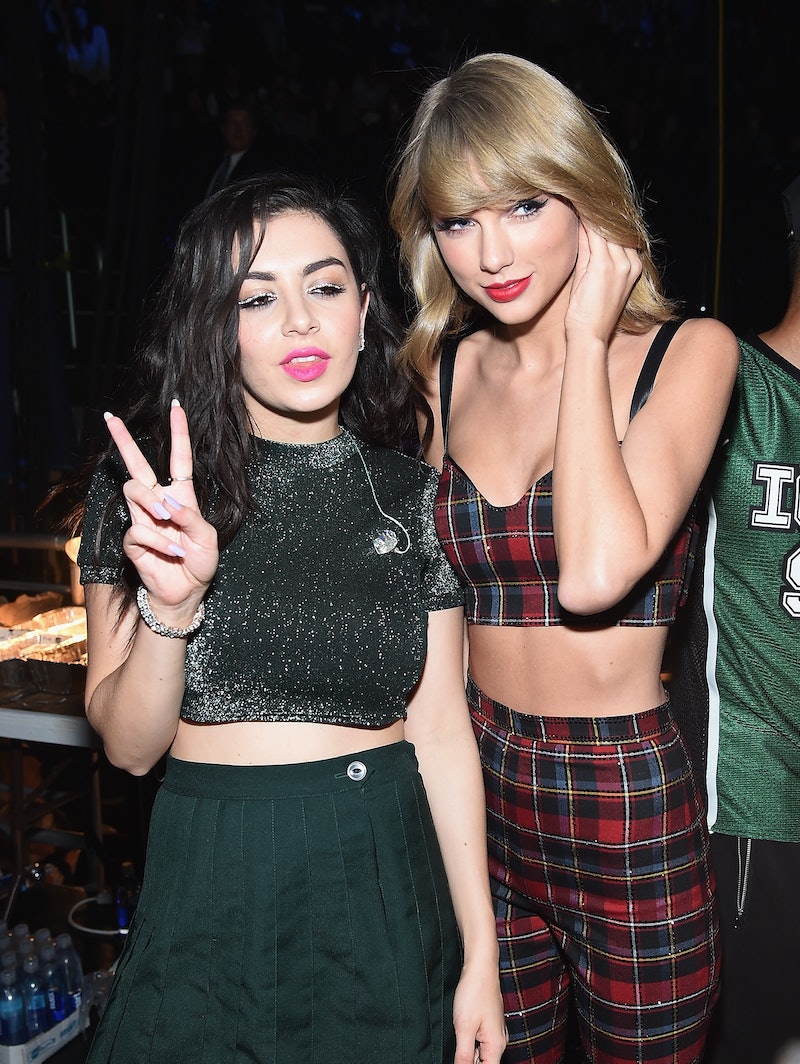 It's always great to see big music stars pay tribute to one another, especially when they cover each other's hits. In a session at BBC 1's Live Lounge, Charli XCX of "Boom Clap" and "Fancy" notoriety decided to take a shot at her own version of Taylor Swift's Grammy-nominated song "Shake It Off" from 1989. The two versions could not be more night and day: Charli XCX roughed it up and gave it a rock-and-roll sound, punctuated by shouts and woos and no ways. It's got a Joan Jett "Bad Reputation" vibe all over it.

But Charli XCX isn't the only one who loves T. Swift songs so much as to give them a go herself. Tons of fans, famous and non-famous alike, have made their own versions of Swifty hits, and some of them were even lucky enough to have their music seen by Swift herself, which she LOVES, most recently this acoustic "Blank Space/Style" mashup that she tweeted, giving it the ultimate seal of approval. She's apparently "obsessed" with it.

Here are some of my personal favorite T. Swift covers, and what makes each so great is that all of them have very original sounds, unique from the Swift originals. Her fans are pretty damn talented.

Charli XCX, "Shake It Off"

Let's start with what brought us here: Charli XCX's upbeat, sassy version of "Shake It Off" that she recorded for BBC 1. She gives the song a whole new sound. Her voice is perfectly rough.

Chase Holfeder, "Out Of The Woods"

Holfeder has done a bunch of amazing cover songs on his Youtube page, including "Nothing Can Change This Love" by Sam Cooke and "Girls Just Want To Have Fun" by Cindi Lauper. His version of "Out Of The Woods" is doubly impressive, though, because he uses only instruments from free iPad apps to create the melody. And on top of that, he harmonizes... with himself!

Glee took on Taylor's "Mine" in a sad, somber episode. In Season 4's episode "The Break-Up," Santana serenades Brittany with "Mine" through tears, right before they split up. :(

This is the one that had Taylor so excited she had to Tweet about it. Louisa and Devin, from Nashville, do a seamless and beautiful acoustic mashup of "Blank Space" and "Style" that's romantic and quiet and LOVED BY T-SWIFT. Their harmonies are off the chain.

Kendrick Lamar, Freestyling Over "Shake It Off"

It's no secret that Kendrick and Taylor have an unexpected bond of mutual respect, which makes me so jealous I could implode. Kendrick visited K104's Dede In The Morning where they surprised him with the challenge of freestyling over "Shake It Off," and of course, he rose to the challenge. He's a king.

Hanson, "We Are Never Getting Back Together"

It's always good to remind yourself that the Hanson brothers are really hot, so you might as well do it while watching their adorable cover of "We Are Never Getting Back Together."

President Obama (kind of), "Shake It Off"

So it's not technically a cover, but Jimmy Fallon's mashup of Obama and T. Swift fits almost a little too perfectly. Thanks, Obama!