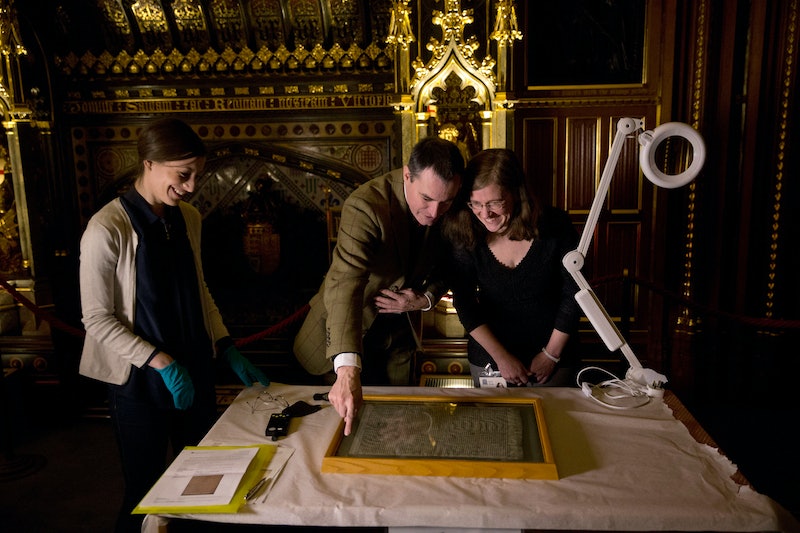 Four framed copies of the Magna Carta — the founding document that laid the groundwork for long-established governing principles — were brought together for the first time at the British Library in London on Feb. 3 to be put on display for a special public exhibition. Just a few days later, a fifth copy of the ancient charter was found wedged between the pages of a Victorian scrapbook in the Kent County Council archives. Kent archivist Dr. Mark Bateson had been searching for a different charter from the town of Sandwich when he stumbled across the discovery.

Although the document itself was torn down the middle and missing a significant portion, the fact that it was discovered with the Sandwich Charter of the Forest places its worth at around £10 million (about $15 million), says Professor Nicholas Vincent, medieval history specialist at the University of East Anglia. The rare pairing of the ancient Magna Carta and the Charter of the Forest, which detailed rights for the common man against the impinging aristocracy, has only been discovered one other time. The two previous documents, both dating from A.D. 1300, are currently owned by Oriel College, Oxford. Vincent told CNN:

[Dr. Bateson] wasn't really aware of the fact that they were either rare or that this one was indeed what it purported to be — I think, from his point of view, it was all a bit of a shock.

Vincent explained that the condition of the Magna Carta itself, its missing text and the royal seal of Edward I, as well as the fact that the document is stuck to the pages of the scrapbook, prevents its worth from reaching the price tags of previous discoveries, such as the one that was sold by Sotheby's in 2007 (which clocked out at just over $21 million) — but that doesn't matter, he insists. He said:

[The damage] would interfere with the value of it if someone were foolish enough to sell it. But I think there's no question of that.

The discovery of the charter is monumental. The Magna Carta is considered one of the world's most important historical documents, as it laid out the liberties of the English people, curtailed feudal payments to the aristocracy, defined the rights of the churches, and checked the power of the king. The charter was originally penned as an accord between the oppressive King John and a group of rebellious barons and acted as protection against unlawful imprisonment while also providing a promise of timely justice. The latest discovery comes only months ahead of the 800th anniversary of the charter's sealing in June 1215.

Throughout history, the Magna Carta has been referenced in documents of historical significance, including the U.S. Constitution, which takes direct phrases and ideology from the charter. Explained Justin Champion, professor of history at the University of Holloway, to reporters at last week's exhibition:

[The Magna Carta] has become a relic in the best sense of the word, in that it represents a whole tradition. It is a bit of a disappointment when you first see it... [it's a] grubby brown manuscript. [But] the Magna Carta [has become] not just an artifact [but] an idea -- and as we know ideas are much more dangerous than things.

The mayor of Sandwich, Paul Graeme, agreed, saying in a statement on Sunday,

Through the American Declaration of Independence, continuing in the Universal Declaration of Human Rights, Magna Carta still underpins individual liberties worldwide. To own such a document, and the Charter of the Forest, is an honor and a great responsibility.

To date, only 24 copies of the charter exist in total. But despite its tremendous worth, the town of Sandwich doesn't plan on selling anytime soon — the newly discovered document will remain on permanent display in Sandwich. Local officials say that they hope it becomes a tourist attraction.