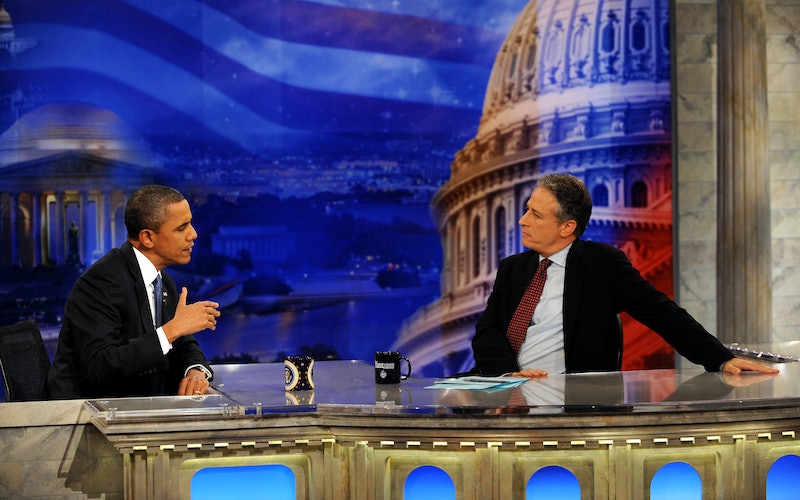 For a lot of millennials, Jon Stewart was as close to a political analyst as they ever got, and The Daily Show host, who announced he's leaving the show later this year, hosted some pretty big political names on his show over the years. Stewart has repeatedly said The Daily Show isn't journalism. But the venerable Pew Research Center studied the show's content for the entire year of 2007 (which was, of course, the run-up to the 2008 election of President Obama), and discovered that Stewart's reference to his show as "fake news" wasn't completely accurate. The Pew study found that the Daily Show "performs a function that is close to journalistic in nature — getting people to think critically about the public square."

The Pew study also found that The Daily Show viewers were well-informed about issues in the news, and those polled ranked Stewart as No. 4 on a list of journalists they most admired. In 2008, The New York Times analyzed The Daily Show' s impact on American politics, at a time when the George W. Bush administration was winding down.

And there's no denying Stewart's often biting satire had an effect on political discourse, if not directly on political decisions. The Daily Show coverage of the 2008 presidential election (branded "Indecision 2008") drew campaign visits from candidates Hillary Clinton, John McCain, and Barack Obama, all hoping to reach Stewart's savvy, younger viewers. It's hard to say whether those appearances on the Daily Show had a direct impact on the result, but it was younger voters who ultimately turned the tide of the election in Obama's favor.

Obama became the first sitting president to appear on the show — more than once — adding to his appearances as a presidential candidate and a senator. He was not the only politician to be on The Daily Show, however; in addition to Obama and McCain, the guest list over the years included Michelle Obama, former Secretary of State Hillary Clinton, Vice President Joe Biden, former presidents Bill Clinton and Jimmy Carter, two former British prime ministers, and scores of other international political leaders.

Stewart was no lightweight when it came to his interviewing skills. His 2014 interview of then-Speaker of the House Nancy Pelosi was truly cringeworthy, as he asked her questions about how money influences politics and why so little was being done about the problem. She awkwardly tried to evade his questions.

Stewart was at his best, however, when he was criticizing the political process and coverage of politics by more mainstream news outlets. His 2008 takedown of sexism in political coverage has to be among his strongest The Daily Show moments.

New York Magazine wrote a scathing criticism of Stewart's political coverage, arguing that it wasn't possible to "treat politics as a joke—and still teach us a civics lesson." But what the article writer misses is that American politics has turned itself into a joke, and if you can't make fun of it while at the same time being a part of it, then you're not really paying attention. Jon Stewart always paid attention.

Besides losing one of television's funniest "fake news hosts," the biggest shame of Stewart's departure from The Daily Show is that he won't be around to cover the 2016 presidential election, at least not in any way we're used to. Here's hoping he has another act up his sleeve.