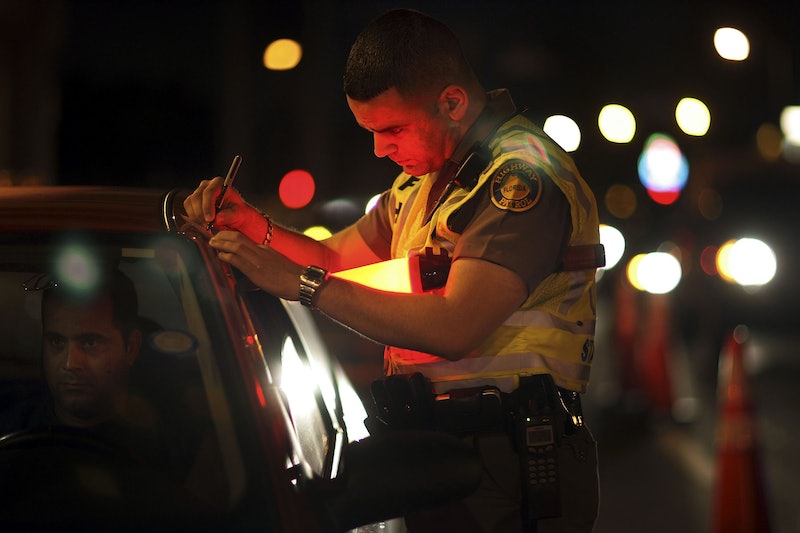 Anyone who has ever been pulled over knows that the first thing one does is roll down their window to allow the police officer to speak. According to one lawyer, however, travelers at drunken-driver checkpoints aren't even required to do that much. South Florida lawyer Warren Redlich says drivers who refuse to speak to police are well-within their constitutional rights, telling the Associated Press that the only thing drivers are actually required to do is hold their license and registration up to the window along with a statement saying that they "have no comment".

"People don't realize that innocent people get arrested for 'drunk driving,'" Redlich told the Associated Press. "It happens a lot."

Along with one of his colleagues, Redlich has established a series of YouTube videos that feature their tactic at work, one of which has been viewed more than 2 million times. The Boca Raton native insists that he isn't out to protect drunk drivers, but those who have been falsely accused. Some of his own clients, he said, have even passed breathalyzer tests but were charged with a DUI regardless because the officer involved alleged that he had detected an odor of alcohol or said that the driver had slurred speech. By not rolling down the window, drivers "are affirmatively asserting [their] rights without having to speak to the police [without a lawyer present]," he explained.

Redlich's theories have already drawn plenty of criticism. Sheriff David Shoar of St. Johns County, who is president of the Florida Sheriffs Association, maintained in a statement that police officers must be able to speak with drivers in order to do their jobs correctly and indicated that a driver who refused to roll down his or her window might be cause for suspicion:

They wouldn't be allowed out of that checkpoint until they talk to us. We have a legitimate right to do it. If I was out there, I wouldn't wave them through. I want to talk to that person more now.

Veda Coleman-Wright, spokeswoman for the Broward Sheriff's Office, warned that while Redlich's tactics might have worked for him and his associate, drivers who are indeed under the influence might not have the same luck. "If those officers had reasonable suspicion to believe that the driver was impaired, they would have investigated further," she told the Associated Press.

Although wary officials are keeping an eye on the tactics, Redlich asserts that his methods serve only to keep innocent civilians out of trouble. Through his website, fairdui.org, Redlich and his associates have issued official printable flyers for drivers in New York, Florida, California, Ohio, New Jersey, Arkansas, Utah, Texas, Georgia, and South Carolina to display in their windows upon reaching a DUI checkpoint, as well as an official book in paperback and e-book form.

The book, titled Fair DUI: Stay safe and sane in a world gone MADD, offers "practical advice" on how to prevent drinking and driving, as well as how to handle police encounters, breathalyzers, and lawyers. In a Skype interview with Tampa Bay affiliate Fox 13, Redlich said,

A lot of people are uncomfortable with the idea that police can just stop you for no reason. If you're not comfortable with that, this is a good way of handling a checkpoint. There are good cops and there are bad cops — the purpose of the flyer is to protect [those] people from bad cops.

Whether or not the practice should be legal is still a hotly debated topic. But whatever the case, at least one lawyer is warning those who may have had one drink too many against trying the tactic for themselves. Said Tampa Bay defense attorney Elliot Wilcox to Fox 13:

It's legal. But you draw attention to yourself. And you'd better be squeaky-clean when you're going through it, because otherwise you give them another reason to pay attention to you. And if you're not squeaky clean... that could be the worst thing that happens to you.