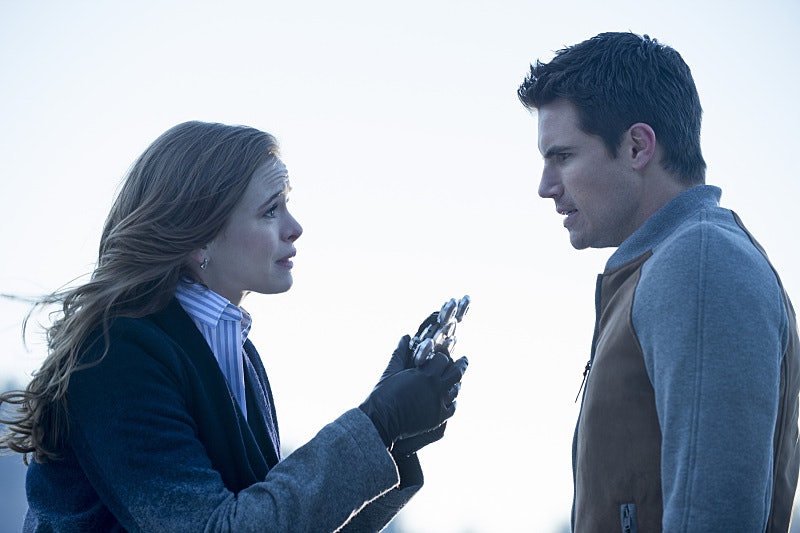 It kind of made sense that Firestorm would eventually return back to his two separate parts on The Flash — Ronnie Raymond and Professor Martin Stein. And yes, there was that fleeting moment where we thought they might not make it, considering that Harrison Wells was pretty clear about the fact that one of them was going to have to die for the other to survive (and we all felt horrible for Caitlin). Thankfully though, crisis averted. Looks like Ronnie and Stein have been separated from Firestorm. Now what?

Though we didn't see it happen on screen, it's safe to assume that they both survived the explosion. I mean, Wells was the one who gave the go-ahead to use part of his tachyon prototype to split them to begin with. He's not going to use that on just a hunch. He knows it'll pull the two of them apart, because Wells is smart and consulted Gideon about it. And besides, both Victor Garber and Robbie Amell are listed in the cast for next week's episode, "Fallout." So yeah, these two halves will still be around.

But, now what? The episode ends with General Eiling demanding that his troops head off to collect Firestorm. How does he even know about Firestorm? Also, is Eiling talking about the combination of Stein/Ronnie, or the actual F.I.R.E.S.T.O.R.M. program? (Remember, that's short for: fusion ignition research experiment and science of transmutation originating RNA and molecular structures, you're welcome.)

Something makes me think that there's a lot more to Stein than we know right now. We do see the moments leading up to the particle accelerator explosion, and Stein drops what we can only assume is part of the F.I.R.E.S.T.O.R.M. prototype. Then, he's fused with Ronnie. But, what was he doing with it at S.T.A.R. Labs in the first place? Was he headed there for Ronnie? Did Stein know something was about to go wrong?

It all seems a bit fishy. Eiling looks way too happy to hear about the explosion out in the middle of nowhere. Could Stein have teamed up with Eiling? If that's the case, then how does the whole triangle of Eiling-Stein-Wells play out? We already know that Wells and Eiling don't get along. So how do Eiling and Stein get along? And then think of all three of them trying to share the same space. Oh boy.

Once again, Flash, we're way too excited for the next episode.