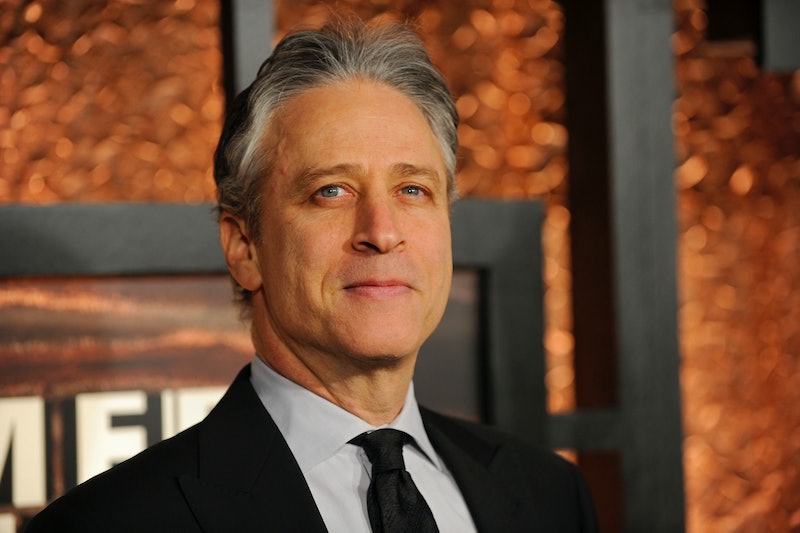 In case you haven't already heard the terrible news, brace yourselves: After 16 years of making us ROFL while delivering top news stories, Jon Stewart has announced that he is leaving The Daily Show . I can't even begin to count the ways in which I'll miss the charming comedic host. But I will say that one of the things I'll struggle with most is not getting to see his gorgeous mane on my TV every night. I know, it sounds superficial, but you have to admit it: Jon Stewart has a fantastic head of hair.

It's not too stiff or newscaster-y, like Brian Williams', but it's not too stylish either, like Anderson Cooper's. It's the right amount of professionalism, while still being cool and approachable — just like his personality (awwww). And even though he's been on TV for over a decade and a half, he's been able to maintain the same hairdo without it feeling tired or out of style. Sure, it's gotten more salt-and-peppered over the years, but in a way that makes it look even better than it did before.

Because our days with Stewart and his hair are numbered and because I'm feeling sentimental about it all, let's take this opportunity to look back at his gorgeous 'do throughout the years...

Aw, the beginning. Just look at that beautiful brunette head. JUST LOOK AT IT.

Parted down the middle never looked as good on anyone else as it did on Jon.

I bet he didn't have to rely on product or a blow dryer to achieve that incredible volume...

Look, even a young Frankie Muniz can't take his eyes off of it. Can you blame him?

Question: Is it as soft as it looks? Asking for a friend...

Let's not forget when he paired it with some facial hair. Swoon.

Even when it got a little frizzy under the lights, it maintained integrity.