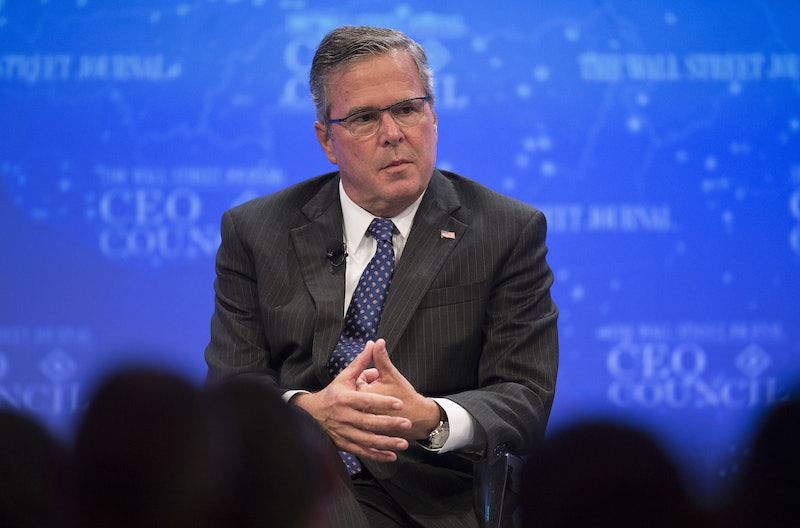 A day after he deleted dozens of offensive tweets, Jeb Bush's chief technology officer, Ethan Czahor, resigned from the former Florida governor's political action committee, according to The Huffington Post, in what looks like the Republican's first big campaign goof. Czahor removed 45 tweets from his account, going from 177 tweets to 132, but not before BuzzFeed noticed the discrepancy and dug up the old tweets (remember kids, nothing is ever really "gone" on the Internet). In the deleted tweets, Czahor referred to women repeatedly as "sluts," makes homophobic and racist remarks, and is overall kinda gross.

Prior to the revelations about his questionable Twitter remarks. Czahor was probably best known for founding the photo-sharing site Hipster.com, which was bought by AOL in 2012, and canceled not long after, according to The Washington Post. But he was heralded by the Bush campaign in its announcement as a "great talent," and Time magazine identified him as someone who might help Republicans bridge the gap to younger voters via a more technologically sophisticated campaign style.

In addition to the deleted tweets, a report Wednesday from The Huffington Post revealed that Czahor's poor choice of words did not end with Twitter. On his blog, Czahor once praised Martin Luther King Jr. for not speaking "jibberish" and not "wearing his pants sagged to his ankles."

In announcing his decision to resign from Bush's Right to Rise PAC, Czahor tweeted that he hoped his situation wouldn't "dissuade future techies from entering politics," and apologized to whomever was chosen to replace him.

It seems like the guy completely missed the point, but more importantly, how could the Bush campaign think that scrubbing Czahor's Twitter account would solve the problem? But in a statement to BuzzFeed News, it seems that's exactly what the Bush campaign thought: A spokesperson originally said:

They have been deleted at our request. Ethan is a great talent in the tech world and we are very excited to have him on board the Right to Rise PAC.

Why any campaign would want someone who held such views, even if they were the views of a young college student, is a little hard to fathom. But the campaign seemed to be distancing itself from Czahor on Tuesday, according to Time magazine. Bush spokeswoman Kristy Campbell told Time:

The Right to Rise PAC accepted Ethan Czahor’s resignation today. While Ethan has apologized for regrettable and insensitive comments, they do not reflect the views of Governor Bush or his organization and it is appropriate for him to step aside.