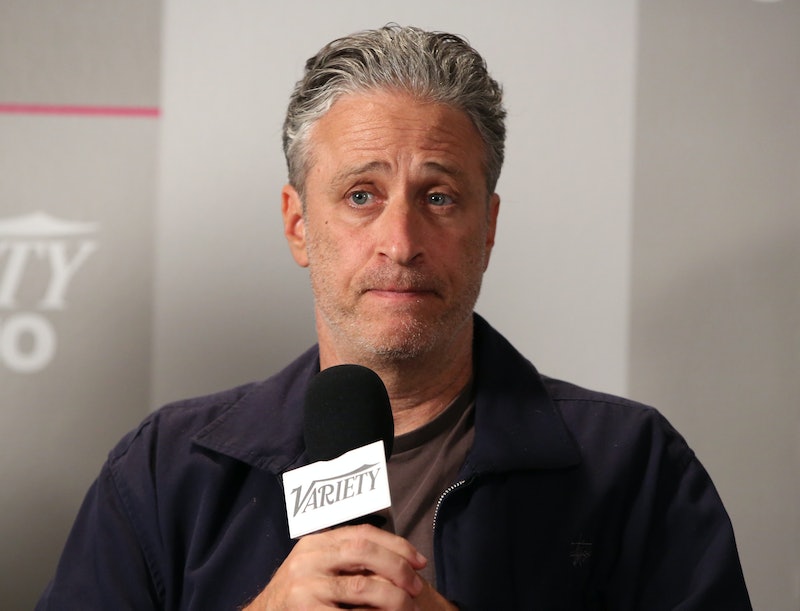 By now we've all heard the news that Jon Stewart is leaving The Daily Show in 2015 after 15 years of indispensable satire behind the desk. He can never be truly replaced, and of course I'll really miss him and all that jazz... but am I the only person who wasn't shocked by his announcement last night that he wouldn't be renewing his contract? I'm not saying I'm some kind of pop culture detective or something (even though I clearly am). It's just that I follow Stewart's career pretty closely, on account of how much I love him, and I'm pretty sure he's left some pretty significant hints for us along the way.

But I'm sure you don't want to comb through everything he's said in the past few months looking for clues, so I collected all the indications he's given up to this point that he might not be sticking around and made them into a helpful list. Just promise me that you'll try not to kick yourself too hard for missing any of these signs, because we only see what we want to see. Especially when what we want to see is Stewart hosting The Daily Show forever and ever into eternity.

Stewart was the subject of their In Conversation section promoting his film Rosewater, and, when asked about the fact that his contract finishes in September 2015, he admitted he's been thinking a lot about what's next:

Sometimes it’s hard to know what your ambition is because you don’t know what your day-to-day is. I liked the day-to-day of being a stand-up. That being said, I don’t know that that would’ve been a sustainable life for me either. Being on the road that many weeks a year, it’s a f***ing hard life. For the time period that I did it, and now, in the way that I can do it here, it’s really great. This job has been really sustainable for me, but not to the extent that I’ll be here forever. It’s not that kind of thing.

In An Interview with The Daily Beast

Also in November 2014, Stewart was asked by the interviewer whether he was going to continue hosting, and, if he was leaning toward no, what might induce him to stay:

It’s so hard to think about it in the crucible of finishing the movie up and everything else. It would be like making a decision about whether or not to keep exercising at mile 24 of a marathon. So, I’m gonna try and gain some distance and perspective so that when I make the decision, it’s not when my calves are cramping.

Speaking of Rosewater, remember that time he left The Daily Show for three months to go film it and didn't put the show on hiatus? Instead, he had John Oliver fill in, giving him invaluable on-the-job experience that I suspect came in really handy when he was pitching his own show, Last Week Tonight. It can't be an accident that Stewart made sure all his protégés were taken care of before he announced his intention to move on himself.

In This Interview with Vanity Fair

In yet another interview from November 2014 — he was really doing the rounds — Stewart acknowledged that he'd probably never find a job he's "as well suited for" as hosting The Daily Show, but refused to let that be a deterrent:

That’s what you’re trying to balance ... I think there are moments when you realize that that’s not enough anymore, or maybe it’s time for some discomfort.

Just take a moment to absorb the fact that we aren't enough for Jon Stewart anymore. (I can't be the only one bitterly thinking it.) Gonna be a long conversation with the therapist tonight.

The Fact That We've Never Had to Ask Him Before

For previous contract renewals, there's never been this will-he-won't-he atmosphere; it's just been a standard re-up. We shoulda known.

When He Spoke to NPR's Fresh Air

When interviewer Terry Gross asked if Stewart would be renewing his contract, and urged him to do so, this was Stewart's response:

It is unclear to me. The minute I say I'm not going to do it anymore, I will miss it like crazy.

You're telling us, mister. And I'm not even gonna bother telling you what month and year that was taped in, because you already know.

And One More Quote From That Same NY Mag Article

When interviewer Chris Smith asked whether the 2016 presidential election might be motivation to stay with the show, Stewart said yes, but added:

Part of the thing to remember is this is not the only process by which you can work material, and sometimes it's more important to step back and reconfigure a conversation than continue the same conversation because you know how to do it.

Ugh. Guys. It was all right in front of us — how did we miss this?