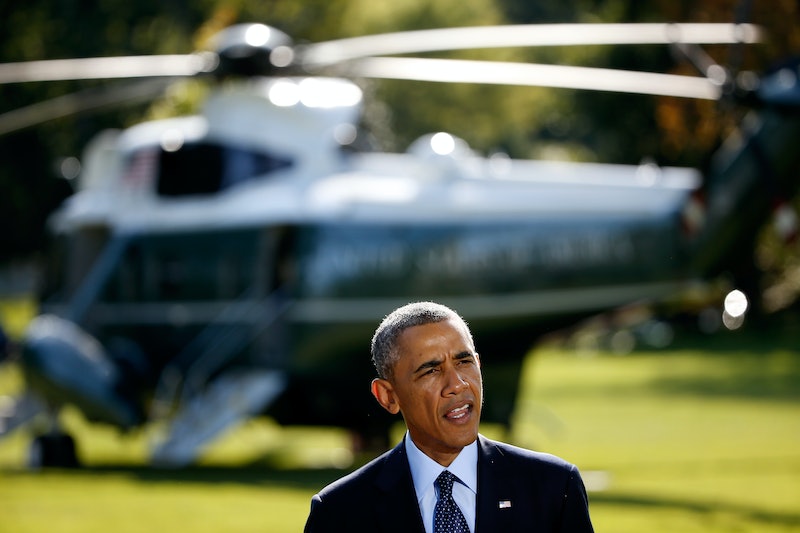 As far as massively consequential policy turnarounds go, this is a big one. President Obama has indeed changed course against the Islamic State, requesting "limited" use of ground troops against ISIS — utterly contradicting his pledge to the public when the U.S. first jumped into the conflict. It's a hell of a one-eighty, and it's one thing just to know that that's happening, and it's another thing to understand the reasons — why did President Obama reverse on anti-ISIS ground troops?

While only Obama and his advisers definitively know the thought process, there are some compelling reasons, both in the recent past and in the harrowing present, that could have informed this decision. Namely, the recent death of captured American aid worker and activist Kayla Mueller, as well as the sad list of American and international citizens that ISIS have executed for show over the last several months.

At present, Mueller is the fourth American to have been killed by the terrorist group (although it's denied this, instead blaming her death on Jordanian airstrikes), joining journalists James Foley and Steven Sotloff, and fellow aid worker Peter Kassig. According to the BBC, Mueller was the last American hostage known to be in ISIS' hands.

It should come as no surprise that Obama would ramp up aggressions against ISIS now, both as a measure of public-rallying revenge — so often the way in our recent military history — and as a means to prevent further kidnappings and executions. If Mueller actually was the last American they had imprisoned, then the U.S. military's operations can't be countered with the sorts of ticking-clock, we're-about-to-execute-your-citizen threat tactics that it's employed in the past.

This is still quite opaque, though — for all we as the general public know (though U.S. intelligence agencies hopefully have a clearer idea), they could have dozens more hostages under lock-and-key, from our country or others.

Another likely reason Obama is finally doing the about-face his liberal base feared is a simpler, time-honored one: that reliable old phenomenon known as "mission creep." It was somewhat clear from the start that the President had military advisers around him urging for this pivotal further step in engaging ISIS — not too long after he insisted it wouldn't happen back in September, General Martin Dempsey told Congress that he'd urge for the ground troops if airstrikes proved insufficient.

The thing is, airstrikes sans foot soldiers do have a limited capacity militarily, and more to the point, they're always going to seem a less effective and comprehensive solution than a ground war might, however more politically costly, tragic and bloody that might be.

Ultimately, the crucial question may be whether Obama knew this would be coming next, or whether he was being honest last year, and has since felt this hand forced. He's taking his pitch to Congress Wednesday, sending along a draft proposal aimed at securing a new, ISIS-specific Authorization of Military Force. If that sounds familiar, well, it should — the dual AUMFs former President George W. Bush secured in the aftermath of 9/11 (the first against global terrorists, the second against Iraq) served as the foundation for well over a decade of American military operations.

Whether this one will be similarly open-ended isn't a certainty, but there is one pretty suggestive note about it. it reportedly makes no mention of a geographic restriction on the fight, meaning it could — you guessed it — set the stage for a sprawling conflict in multiple nations. In other words, precisely the thing many of us wanted to get away from.