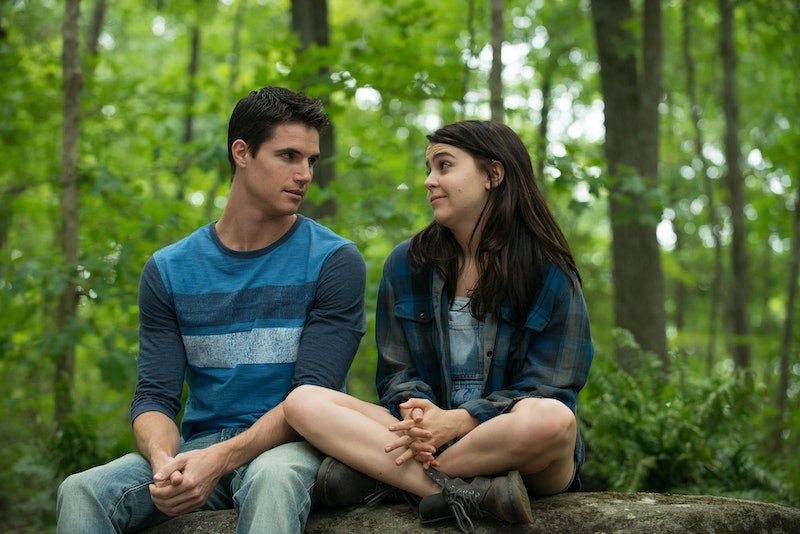 Spoilers within, duh. It's not hard to love CBS Films' new teen comedy The DUFF . Despite its potentially questionable subject matter — the idea that anyone could be called the "Designated Ugly Fat Friend" in a major motion picture set me off from the start — the film truly does turn the Urban Dictionary favorite on its head, offering empowerment and self-love as an antidote for this potentially harmful term. But it's not just the fact that the film teaches us to stop comparing our appearances and judging them by our peers'; the film also finds a teen rom-com heroine that we've sorely needed for eons in Miss Mae Whitman. And the epitome of her new wave teen queen comes from the ending of The DUFF in one of its final scenes, which happens at — you guessed it — The Big Dance.

In large part, The Duff follows many of your run-of-the-mill teen movie staples: The boy next door as the love interest; our heroine as the super smart overachiever; the school bully as a bodacious mean girl; the Red Solo cup soiree as the start of the drama; the quip-ready teachers as the peanut gallery; the makeover montage; and of course, the Cinderella moment at the homecoming dance. But what's different about The DUFF is the way the film actually handles those instances when it comes time to tackle them.

During the makeover moment, Robbie Amell's character Wes makes sure to note that he's not trying to change Whitman's Bianca — he's trying to get her to be more of herself instead of hiding under oversized, baggy clothes. He's basically pulling a Stacy London a la What Not To Wear. Then there's the part where Hot Guy Next Door Wes hasn't completely forgotten Bianca, his childhood bestie. They still have a rapport and a level of frankness, which leads to Wes' "you're the DUFF" moment as well as Bianca's numerous instances of pointed, hilarious quips in his general direction. Wes isn't unaware of Bianca's existence and Bianca doesn't treat him as this other worldly presence — he's just her dumbass old friend Wes (until he's not).

Finally (and most importantly), the moment at the homecoming dance isn't just your typical hot new look reveal. Though to be fair, it certainly looks like one on the surface:

Sure, Bianca's friend Jess uses her budding fashion designer skills and fancy sewing machine to turn one of Bianca's favorite oversized flannel shirts into a hot little number of a homecoming dress. And sure, Bianca waltzes into the dance in the typical makeover reveal fashion (slo-mo, high heel-addled confidence, walking as the confidence center of her friend group, etc.), but that's not the point of the scene.

Wes immediately takes notice, having just gotten back together with mean girl Madison (Bella Thorne), but keeps it platonic, telling Bianca she looks great and having a brief friendship rekindling moment after their falling out earlier in the movie. The true turning point for Wes doesn't come upon watching, slack-jawed, as Bianca enters the room in a get-up that's completely transformed her (though her homecoming look is definitely the glam version of Bianca, she thankfully hasn't done a 180, going from indie duckling to the Swarovski Crystal swan). Wes only changes his mind when he hears Bianca's speech to Madison — he's got the hots for her brain, not just her bod.

The resident it girl is infuriated by seeing her on-again boyfriend speaking to Bianca and takes it upon herself to tear Bianca down as best as she can, and Bianca responds with an important (albeit a little cheesy) speech about DUFF-dom and self-worth: Madison's dream is to be the high school it girl, and that's great, but Bianca's got other dreams for herself. She doesn't judge Madison's goals and she asks that Madison doesn't judge hers. She finally ends the speech with the entire point of the film:

"Yeah, I'm somebody's DUFF. So is everybody. It shouldn't affect how you see yourself."

Bianca then trots back to her friends, ready to just enjoy the night and her newfound outlook, while Wes and Madison dart towards the stage to receive their Homecoming King and Queen crowns. Wes sees Madison living her dream — being Homecoming Queen — in stark relief against Bianca's wise words and lofty goals. It's at that moment — long after the superficial glam reveal has passed, I might add — that he realizes he wants to be with Bianca. Cue romantic make-out moment.

Yes, it's cheesy — this is still a high school comedy after all — but it's the distinction about what Wes really values about Bianca that serves as an undercurrent for all the things The DUFF does right.

The film isn't about spending all your paper route money on the best, newest, sexiest clothes. It isn't about pushing up the girls and covering your face in makeup so you can slowly walk down a flight of stairs and make Freddie Prinze Jr. fall in love with you at first (made-over) sight. It isn't even about taking down the high school Queen Bee or having all the best snappy responses in social situations.

The DUFF is about finding your worth by embracing and loving yourself exactly as you are. By allowing the romance at the end to resolve itself in a way that shows that the self-love it preaches is the sexiest thing someone can "wear," The DUFF delivers on its promise wholeheartedly. And it does it so well, I'll even forgive the unrealistic expectations Bianca sets by eloquently telling off the school bully and then making out with her new boyfriend in the journalism room (aka, every romantic fantasy I had in high school).