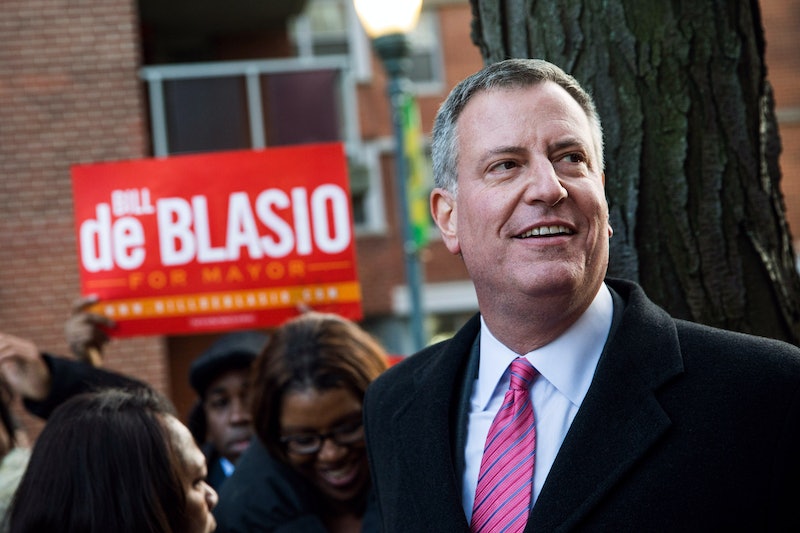 Fashion Week has its fare share of high-flying attendees, but this year one will trump the rest. New York City's Mayor Bill de Blasio will kick off Made Fashion Week, according to Women's Wear Daily. If you're wondering why the venerable de Blasio is dipping a toe into the fashion world instead of engaging in, y'know, improving the quality of life for New York City residents, it may be time to review your local history.

Fashion Week is as integral to the city's commerce as tourism, food, or 5th Avenue's array of designer shops. In financial terms, the event grosses $900 million annually and a tax revenue of $2 billion according to the New York City Economic Development Corp. No wonder the good Mayor is taking a moment to speak to his primary breadwinners.

During his speech at Made Fashion Week's Milk Studios headquarters, Mayor de Blasio will likely discuss his plans to implement new policies to transform the landscape of manufacturing and garment work in the city. The decision to commence Made Fashion Week comes on the heels of de Blasio's surprise cocktail party for the CFDA during Fall 2014 Fashion Week, which signified the Mayor's interest in supporting the fashion industry and its endeavors. In an interview with Women's Wear Daily, deputy mayor for Housing and Economic Development Alicia Glen illuminated exactly how devoted local officials are to Made Fashion Week, stating,

Fashion contributes so much more to New York City than glitz and glamour — it’s a hometown industry that creates jobs for hundreds of thousands of New Yorkers and generates billions of dollars in economic impact each year... We are determined to make sure that Made in New York is the hottest buzzword in fashion.

Even the most cynical detractors must admit that with this type of government-supported backing, Made Fashion Week is more than just a chance for bloggers to play dress up. According to de Blasio and his team, the fashion industry itself is a financial boon, a provider of more than 180,000 jobs, and perhaps one of New York City's defining cultural contributions to the world. And lest anyone forget, $900 million in 14 days is nothing to sniff at.