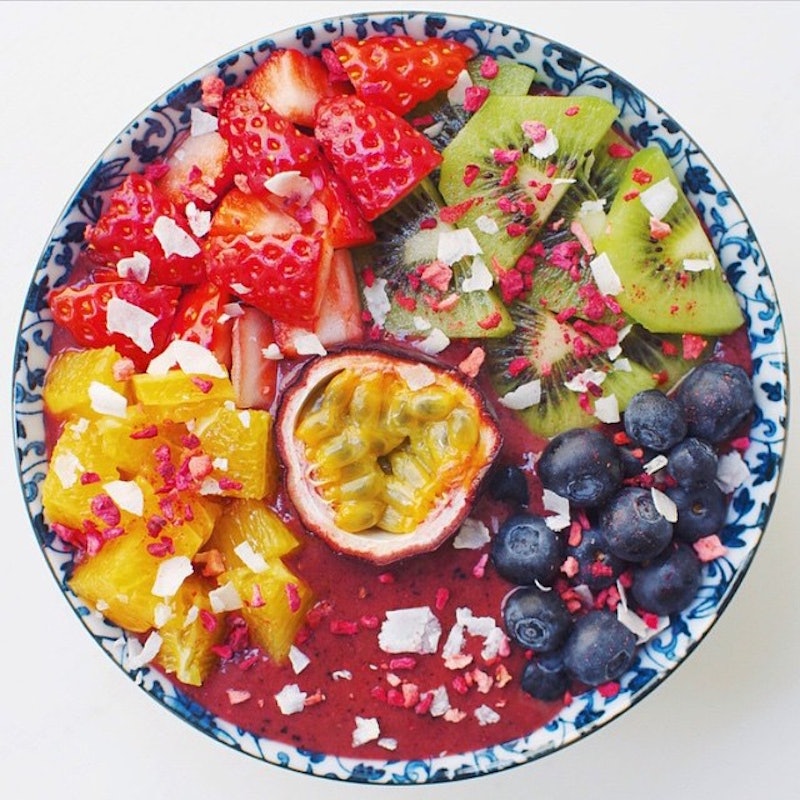 Almost everyone has a favorite color. Even if you don’t think you have one, you’re probably still more naturally drawn to some colors more than others. We all have our preferences — that’s just how human beings roll.

The most popular color in the world is blue, and it’s also the most popular color for men, everywhere in the world, to wear. (Women, on the other hand, mostly prefer wearing black.) Statistically, yellow isn’t preferred by many, with only five percent of people claiming it as their most favorite color, and apparently, as people get older, they start to shun orange. (I owned an orange sweater once. I was 12. It was a fashion low point for me.)

If you’ve ever wondered what your favorite color says about you, then I’m here to help. The psychology of color is a study in how the colors we prefer play a hand in our personalities and behavioral traits, and it's a real thing. (OK, fine, it's partially based in pseudo-science, but it's also a real thing.) This isn’t to suggest that your favorite color defines you, or any of us for that matter, but if it gives you an, “OMG! That’s totally me!” moment, then I will have succeeded in my task.

If Your Favorite Color Is Blue …

You are: Calm, cool, and able to keep things more even keel than most.

Blue, the color of the ocean, is often associated with feelings of serenity, so those who love it are often able to find peace and tranquility in places where others do not. People who love to wear blue are said to be easy to get along with, reliable, and, for lack of a better word, lovable.

If Your Favorite Color Is Red …

You are: Bold, sexually charged, and want to make a lasting impression.

Studies have also found that both genders are more attracted to a person in red than any other color. Although scientists aren't exactly sure why, they think it may have to do with the fact that when someone blushes they turn red and there's some sort of animalistic, sexual attraction there. People whose favorite color is red are usually aware the effect it has, and are extroverted and confident enough to take advantage of it.

Interestingly, it's also been found that a preference for the color red increases for women when they've reached peak fertility in their menstrual cycle.

If Your Favorite Color Is Green …

You are: Prone to putting lots of importance on money and security.

Although you might think loving green means you love nature, according to color psychology, those who love green desperately want to feel secure in both their finances and relationships. To them, how they are viewed by others is their greatest concern, and they really want to be seen as successful, wealthy, and an important person in their social circles. They're also social butterflies and are probably on a diet as we speak.

If Your Favorite Color Is Pink ...

You are: A little naive, sheltered, and have delicate sensibilities.

Those who favor pink do so because it's an escape from the reality of impending adulthood. They're childlike in the way they interact with others, and hope to be able to pull off red, pink's older sister, when they finally grow up ― failing to realize they've been an adult for a long time now. Perfect example of the pink mentality: Girls' Shoshanna Shapiro.

If Your Favorite Color Is Orange ...

You are: Friendly, easy going, and probably a theater major.

Those who adore orange want to be the center of attention, tend to be flamboyant in nature, and are not likely to have too many serious thoughts. They're friendly, and people like that — until the overdose of flamboyancy kicks in, when friends tend to run.

According to Faber Birren, who studies color, those with a favorite color of orange are not as likely to marry, and if they do, their "marriage will be one of light affection." Yikes.

If Your Favorite Color Is Purple ...

You are: A wee bit off, but it your own special way.

People who are drawn to purple are sort of hippy-like in the way they impractically tackle the world with their utopian ideals. They tend to favor mysticism to reality, and prefer to see the world through violet-colored glasses in a way that can be difficult for those around them. It's probably best that they set up a Tarot card reading shop stat, and just get it over with already.

If Your Favorite Color Is Grey ...

You are: Afraid of commitment.

Somewhere between black and white, grey is the color that just can't commit, and the same goes for those who love it. From the perspective of color psychology, grey is emotionless, boring, detached, and indecisive. Those who say their favorite color is grey don't tend to have any major likes or dislikes. They can take or leave most things, and, on a whole, lack the passion that comes with loving a "real" color.

If Your Favorite Color Is Black ...

You are: Part moody, part sophisticated.

Like Angelina Jolie, those who call black their favorite color tend to be complicated realists with a need for control. Their realistic view of the world keeps their pessimism and moodiness in check, while their simple approach to always keeping things dark and dreary makes them appear far more sophisticated than they might actually be.

Or, they might just live in New York City.

If Your Favorite Color Is White ...

You are: Innocent. (Or at least you think you are.)

White embraces innocence, virgins, and is the favorite color of F. Scott Fitzgerald's character, Daisy Buchanan, a woman who wanted to create a perception that wasn't entirely true. Those who favor white want to convince others (and themselves) of a purity they likely just don't have. They're also really meticulous in their appearance, unlike the rest of us who would never be able to keep our whites white.

If Your Favorite Color Is Brown ...

You are: Simple and comfortable.

Those who love brown have no need for extravagance. They like things as they are, and can do without any complications that come with change. They're reliable, frugal, direct, and being spur of the moment is just not in their personality.

If Your Favorite Color Is Yellow ...

You are: A happy idealist who is underestimated far too often.

It takes a certain type of personality to prefer yellow to all the other colors. It involves a level of optimism that most people over the age of 10 just don't have. Because of this optimism, and the idealism that comes along with it, people who love yellow sometimes come off as whacky or aloof, but that's just because the moody folks are straight-up jealous.

More like this
This Psychological Effect Might Be Keeping You From Hitting Your Goals
By Lexi Inks
The 19 Best Tweets & Memes About Bisexual Awareness Week
By Lexi Inks
Androgynous Formal Wear That Will Make You Feel *So* Fancy
By Megan Lasher
The Spiritual Meaning Of Angel Number 000, Explained
By Kristine Fellizar
Get Even More From Bustle — Sign Up For The Newsletter