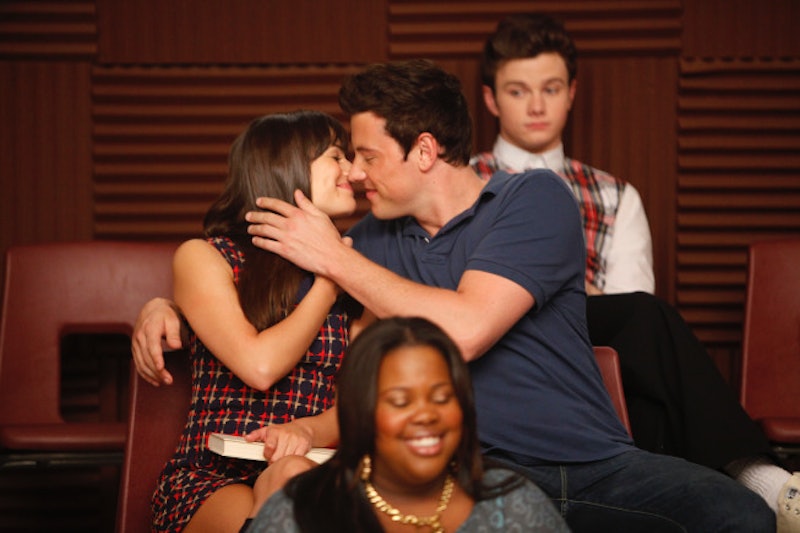 Usually, there's nothing worse than a Glee cover track. Season 1 of the series boasted quite a few unique renditions of popular tracks — Salt-n-Pepa's "Push It," Jazmine Sullivan's "Bust Your Windows," and, of course, Journey's "Don't Stop Believin'" — but, by Season 2 of the series, Glee churned out carbon copies of original tunes, turning a profit despite a distinct lack of originality. But it's a guarantee that I'll be running to iTunes to purchase the show's latest release, Lea Michele's "Make You Feel My Love," a tribute to the late Cory Monteith, who played lovable jock Finn Hudson on the series before his death in July.

It's a heartbreaking track, to be sure — though Michele's vocals are impeccable, they're also drenched in an undeniable sadness, giving a Glee song something all Glee songs have been missing for five seasons now: feeling. And however difficult it is to listen to "Make You Feel My Love," it's all but guaranteed we'll be in bad shape come Thursday, when the FOX series airs "The Quarterback," Monteith's tribute episode. Hearing the track is one thing — it's another to see Michele, who was dating Monteith at the time of his death, singing the track. Hell, it was hard enough to even listen to Michele's "Yesterday."

Listen to "Make You Feel My Love" below, and, for once, feel good about listening to a Glee song.

More like this
Selena Gomez Joked About Her Relationship Status In Her ‘SNL’ Monologue
By Grace Wehniainen
After 'Heartstopper' Used This Indie Artist’s Song, Streams For It Soared 8,000%
By Alyssa Lapid
Danny Boyle's 'Pistol' Explores The Extreme Highs & Low Of An Iconic '70s Band
By Rachel Mantock
Taylor Swift Is "Spiraling" After Releasing "This Love (Taylor's Version)"
By Jake Viswanath
Get Even More From Bustle — Sign Up For The Newsletter