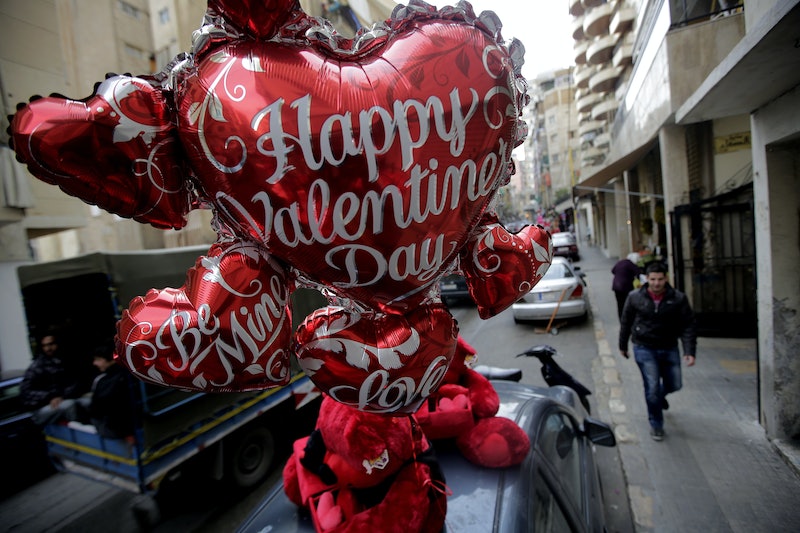 Much is often made about figuring out what men and women really want for Valentine's Day, but you know what? It turns out the answers aren't all that complicated. Matchmaking service It's Just Lunch (which you might remember from that poll about whether sports and relationships mix) surveyed 1,000 of its users to get to the bottom of this often-considered question — and not only are the results not surprising, they're actually kind of comforting. Generally, it seems like we all just want to have a nice meal and spend some quality time with our loved ones. Isn't that nice? When you get past all the floofy decorations, florid prose, and questionable boxes of chocolates that inevitably appear during the first few weeks of February, that's exactly what Valentine's Day should be about: Appreciating the people you love.

It's Just Lunch's survey provides a pretty clear snapshot of how we view Valentine's Day, from how we feel about it to what we like to do to celebrate it. Check out a few highlights below; then scroll down to see the whole thing arranged in a handy-dandy infographic. Cupid may on occasion be stupid, but sometimes, he's not too bad of a guy.

1. We have a love-hate relationship with Valentine's Day.

Almost one-third of both men and women said they feel “indifferent” about V Day; 13 percent even went so far as to say that it made them feel “miserable” or “dreadful.” At the same time, though, 70 percent of men and women also said they expect to spend February 14th with someone if they've been on at least four dates together. In short: We hate it, and yet we still feel compelled to celebrate it. Humans are such fickle creatures, are we not?

2. We'd rather celebrate with experiences than with things...

This makes a lot of sense; it's often said that you'll remember the experiences you spend your money on, rather than the objects you bought with it. The top date choices for Valentine's Day festivities included dinner at a restaurant that holds some significance for your relationship, or a weekend getaway. Furthermore, a whopping 50 percent of men said the best gift they could receive was sex.

3. ...But we do still appreciate tokens of love.

4. And if you're going to gift flowers, give them to your honey in person.

Since flowers are so popular, It's Just Lunch went ahead and asked everyone where they'd prefer those flowers to be delivered. The lion's share — 45 percent of men and 58 percent of women — said that they should be given in person, wherever that may be. So much for having a bouquet delivered to the office.

Check out the full infographic below, and head on over to It's Just Lunch for more Valentine's Day survival tips.