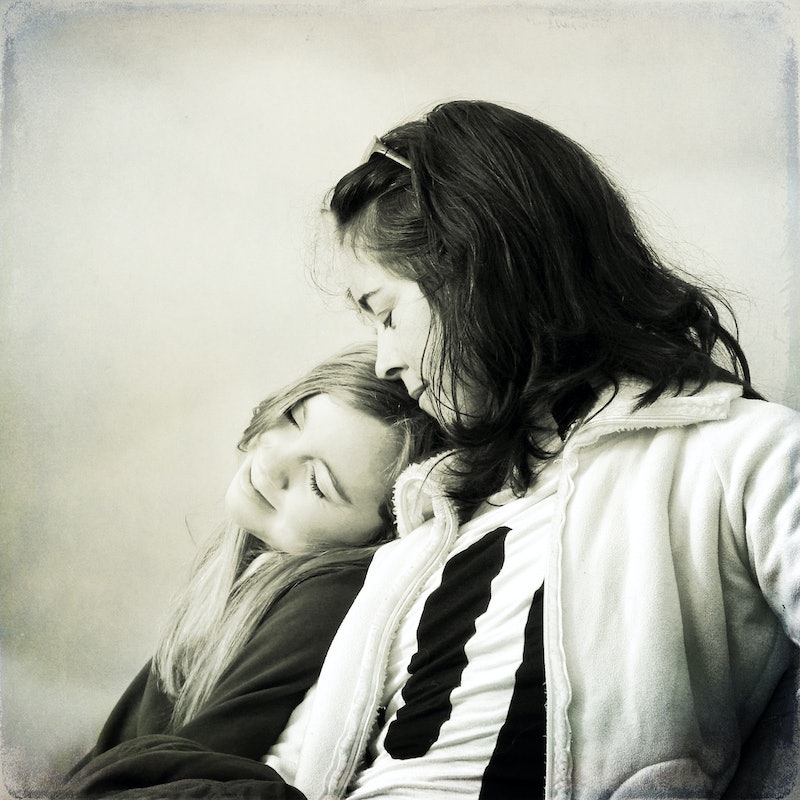 People are always surprised when I tell them how much older my mom is. Our story is outside the norm: my mother didn't meet my father until she was 27 (practically old-maid status in those days), and she didn't give birth to me until she was 40 years old. This year, I will be 30, and she will be 70. At 66, my dad is not far behind her.

My mom was born in 1945, which — as I often point out to her — means that she was alive when World War II was still going on. When my mother was born, FDR was president, and women were expected to live with their parents until they were married. She grew up in a neighborhood where there was only one Jewish family, and she certainly never encountered anyone who was openly gay. My mom was born into a very different world than the one she lives in now — and I've learned a lot from what she has to teach me.

The world may see having older parents in a negative light, but I see the positives. I'm proud of my parents' age and grace. And as reproductive science develops, our age gap will most likely become much more common in the coming decades. So for those future children — and for any children out there who share my experience — here are six reasons we're actually really lucky to have older parents.

1. They were full people when they had us.

One of the strangest parts of growing up is discovering that your parents are actually people. I experienced that too, but I think it was a little less jarring, because throughout my childhood I'd heard stories of the lives they'd lived before me.

I knew that after graduating college in 1967, my mother had spent a year working in New Orleans in the Americorps VISTA program, put herself through graduate school, and worked with troubled youth. I knew the stories of the tiny apartments my parents shared in a city near Boston. In other words, I could see that while I was now the center of their world, there had been a world before me. When the time came, that helped me to understand that they were, you know, real people.

2. They have even funnier stories.

When I was learning about the women's movement and about the huge cultural shift that took place from the '50s to the '60s, I had primary sources to talk to in-depth about it with. Because my parents were so much older, they saw the world change a huge amount, and the stories they told about their childhoods were rich with differences from everything I'd known.

I love when my Dad talks about his delight as a kid when his favorite movie was played on TV, because he knew he might not get another chance to see it (it was so far pre-VHS! So insane!), and when my Mom tells stories about having to wear a hat in church and skirts to college classes.

My parents smoked a lot of pot in the '70s. This is a fact that I've always been aware of, because by the time I came along, that period of their lives was long over. They had lived through their drug phase thoroughly and come out of it, so they were more comfortable being honest with me about their relationship to drugs and alcohol.

In high school, when my friends and I decided to try vodka one night and everyone ended up puking in a playground (YAY high school!), I knew I could call my parents and they would come get us and we wouldn't be in trouble. That's what happened, and afterwards, we talked honestly about drinking. I was never scared of getting caught in high school — just aware that my parents were there if I needed them.

4. They likely had more things figured out when they had us.

No one ever has everything entirely figured out, and I imagine that parenting is always a giant mystery, regardless of age. But having children later in life means that our parents probably had things at least a little bit locked down.

Both my Mom and Dad spent their twenties and much of their thirties without a clear sense of what they wanted to do or how to do it. They were broke (and stoned, as previously noted), and still learning. By the time my sister and I came along, that phase of their lives was over, and they were really ready to take on the next stage.

5. They have perspective about what life is all about.

One day in 2007, when I was home from college for the weekend, I was talking to my dad about how lost I felt. I didn't have any idea what I might ever do with my life and I didn't have a boyfriend (the latter problem seemed much bigger at the time), and everything felt pretty out of my control. My dad told me that all I had to do to be happy in life was to find the thing I want to do, the person I want to do it with, and the place I want to do it in. At the time, I laughed — oh, just those things, huh?

I still don't have all three things in place (and it often seems like once one comes together the other falls apart), but I know what I'm striving for: that simple and clean version of success.

6. They help us appreciate the beauty of aging.

Ok, so this might just be me, but to me, my mother's face is the softest face in the world. She looks much younger than her age in all regards except her wrinkled face, which I've always loved and been drawn to. There is wisdom and strength and love in those wrinkles. My mom has lived 70 years and had so many lives, and each one is represented by a soft crease. I'm grateful for the wisdom, and I'm grateful for those wrinkles.

I love you guys!

More like this
GIRLI & Q Fell In Love At A Skatepark & Never Looked Back
By Jessica Morgan
Juneteenth Is Now A Federal Holiday — Here's What That Means
By Lani Seelinger and Syeda Khaula Saad
Melony & Gia Prove That Couples Who Grow Together, Stay Together
By Jessica Morgan
Are Cancer & Sagittarius Compatible In A Relationship?
By Kristine Fellizar
Get Even More From Bustle — Sign Up For The Newsletter