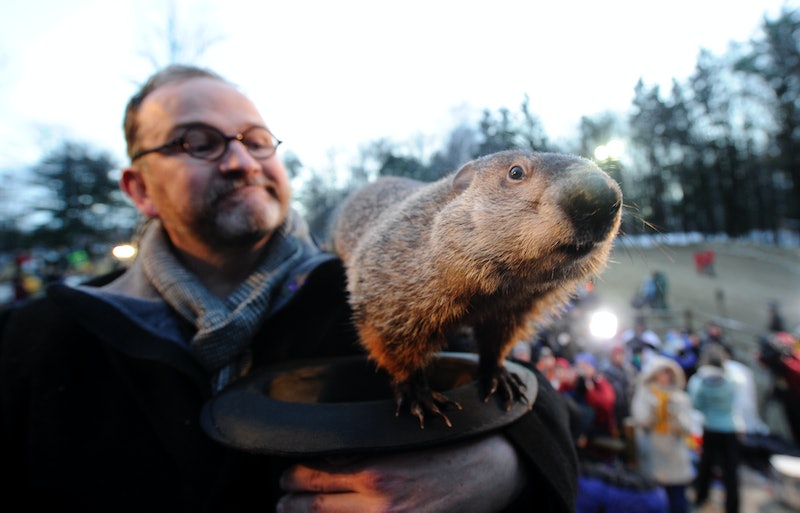 Punxsutawney Phil, America's Most Famous Groundhog, angered the entire Northeast last week when he unwillingly came out of hibernation and spotted his shadow, signifying six more weeks of winter. The adorable four-legged creature should stay in hibernation as long as possible if he knows what's good for him: New Hampshire authorities issued an arrest warrant for Punxsutawney Phil, and they're not playing around. (OK, maybe they are.)

The Merrimack Police Department posted an urgent message on its Facebook page on Tuesday, requesting any tips as to where Phil might be holed up for the next six weeks. If anyone has any information on Phil's hideout, let Merrimack police know — they're keeping a cell open just for him. Merrimack police said via Facebook:

We know we are a day early, however we here at Merrimack Police felt compelled to let the public know that there is a warrant for Punxsutawney Phil! We have received several complaints from the public that this little varmint is held up in a hole, warm and toasty. He told several people that Winter would last 6 more weeks, however he failed to disclose that it would consist of mountains of snow! If you see him, do not approach him as he is armed and dangerous. Call Merrimack Police, we will certainly take him into custody!

Note: The Merrimack Police Department included a photo of the golf-course-terrorizing groundhog from Caddyshack in its post. That groundhog is not wanted for arrest at this time.

According to ABC News, it's unconfirmed whether Merrimack police plan to extradite Phil to New Hampshire once they locate him. What is confirmed is the record snowfall that has pummeled New England over the last few weeks.

In Boston, city officials were forced to shut down the entire public transportation system Tuesday, sparking a heated feud between newly elected Massachusetts Gov. Charlie Baker and MBTA General Manager Beverly Scott (who ended up resigning from her position on Wednesday).

The Weather Channel forecasts yet another snow storm to hit New England on Thursday. Thanks to Punxsutawney Phil, it's going to be a long, long, long six weeks until spring.