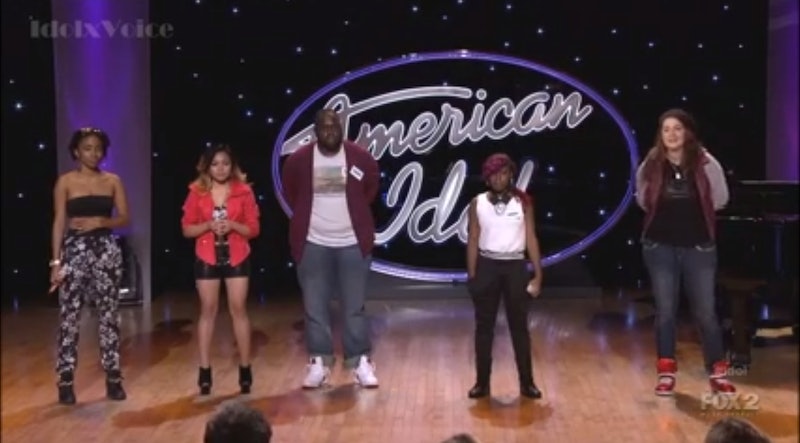 Picture the most stressful day you've ever had at work. Now add no sleep and an awful team — oh and don't forget that this is the only chance you'll ever have at achieving the dream you've had since you were born. Pretty awful, right? Well, that's what the group rounds of American Idol Hollywood Week feel like — multiplied by a million. One team experienced the extreme stress first hand, and it didn't end well for them. The team — appropriately named Team No Sleep — had lots of trouble learning to work together and it was very clear in their performance. Their rendition of Bruno Mars' "Grenade" completely fell flat and failed to "put a bullet" in Harry Connick, Jr.'s brain. The result? Three of the five team members were sent home with lots of sadness, regret, and anger towards their teammates.

Performing with a group is no easy feat, especially when your team leader is spending more of his time chasing girls than chasing his dream. Hollywood Anderson met with much criticism from his teammates, especially Laurel Taylor Taunton. And I totally understand her anger the whole situation. She was the only one that recognized the extremeness of the situation and couldn't get her teammates to understand her. Taunton also got completely overpowered during her solo in the performance, and was ultimately sent home because of it.

Was the group the only problem or was it Taunton herself? My answer is the group. They were disorganized, had different styles, and were on completely different pages. That's the whole point of group rounds, though. The audition tests flexibility and versatility — two huge qualities of becoming a star. It's meant to separate the divas from the team players. Of course, not all team players are made for Idol and not all divas should go home. But there's a happy medium between the two that proves someone is ready for fame but also knows how to blend in — and that's what we'll find out in the solo Hollywood round.