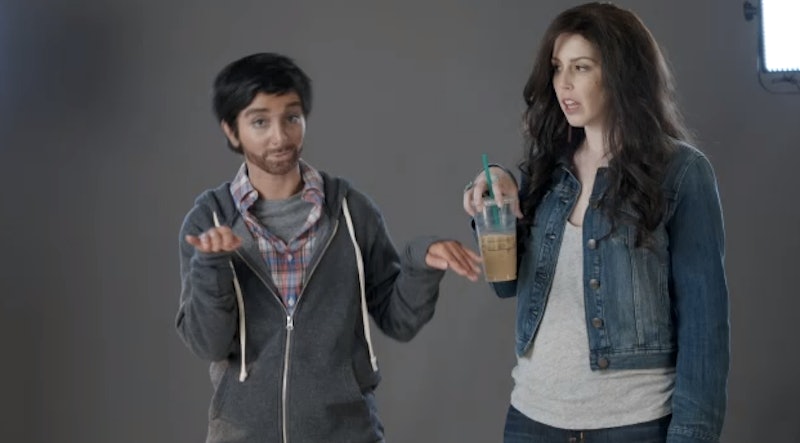 The big Saturday Night Live story of the weekend was that Miley Cyrus was the host, and she didn't fail completely. But in one of the sketches from Saturday's show, a "casting call" for 50 Shades of Grey that actually had some great celebrity impressions for the sake of celebrity impressions, Nasim Pedrad wore brownface to play Aziz Ansari. And the worst part is, I'm not even surprised anymore. Color me jaded in the face of racism!

SNL has been criticized for its diversity problems, and with the addition of their six new cast members this fall, the criticisms were same old, same old — five of the new players are white men, and only one of the new cast members is a woman, and she's also white. The series' 39th season might have missed an opportunity to cast strong female comedians and also to cast more comedians of color, as many argue, but SNL has had a diversity problem since the show began. Which is odd, considering we used to consider SNL edgy — but there's nothing edgy about a cast full of white comedians. (And, unfortunately, there's still nothing edgy about the series, which I mostly tune into to ogle Seth Meyers on Weekend Update. Those dimples! That pokerface!)

At Salon.com, Prachi Gupta comments that SNL's diversity problem is not just the lack of cast members of color, but its entire perspective and point of view. (NBC has not yet responded to Bustle's request for comment over the criticism.) Gupta notes that the issue is not that SNL does not cull cast members with different backgrounds — be it female, gay, or non-white — but that its scope is too narrow to honor and display these perspectives. A show that started as countercultural is now the mainstream, and these diverse perspectives don't seem to really have a place on the show:

Take, for example, Issa Rae’s critically acclaimed Web series, “The Misadventures of Awkward Black Girl,” which was recently picked up by HBO. “UCB and Second City and even ‘SNL’ don’t have a history of speaking to what it is to be an awkward black woman in America. So they probably wouldn’t know where to put that,” said Bell. That’s also why Rock, an “SNL” performer in the early 1990s, left the show after only three seasons to work on “In Living Color.” In 2011 he told Marc Maron, “I wanted to be in an environment where I didn’t have to translate the comedy I wanted to do.”

So when Pedrad donned brownface on Saturday's show to play Ansari, it was easy for her to get away with it. After all, most of the sketch comedy show's audience is white. Some might have been bothered by Pedrad's sketch, but only writers of color, like Gupta, and Rohan Guha at The Aerogram, a blog about South Asians in the media, pointed it out. Guha was disappointed with the sketch, but he too notes that Pedrad is not to blame — Fred Armisen's stint as Barack Obama garnered a lot of side-eye, even though SNL was quick to note, "But he's not white, so it's okay!" (Armisen is Venezuelan-Japanese.)

Does that make it better? Only slightly. Yes, it would be infinitely more offensive and more criticized if the actor playing Obama or Ansari were white — if the show is going to continue to use "brownface," it might as well use another actor of color! Pathetic that I have to concede to this, but that's where we are at.

Ansari himself has not yet commented on the sketch, but he has been open about his experience as a comedian of color in the past — as he said in this Bullett Magazine interview of himself with himself, "I hate when people ask, “What’s it like being an Indian comedian?” Ansari is constantly trying to make the point that his Indian heritage is not ALL that defines him, and consequently his experiences as an Indian man are not all that he should write about. I hope that he comes out with a statement about SNL's sketch.

I would like to have been privy to the conversation with the writers and Pedrad, though, when they asked her to put on the bronzer to play Aziz Ansari. As a person of color (the actress is of Iranian-American descent), she must know the implications of brownface, and yet she participated in the sketch anyway. It speaks to the pressure to conform. Yes, she played Ansari, but is she really to blame?