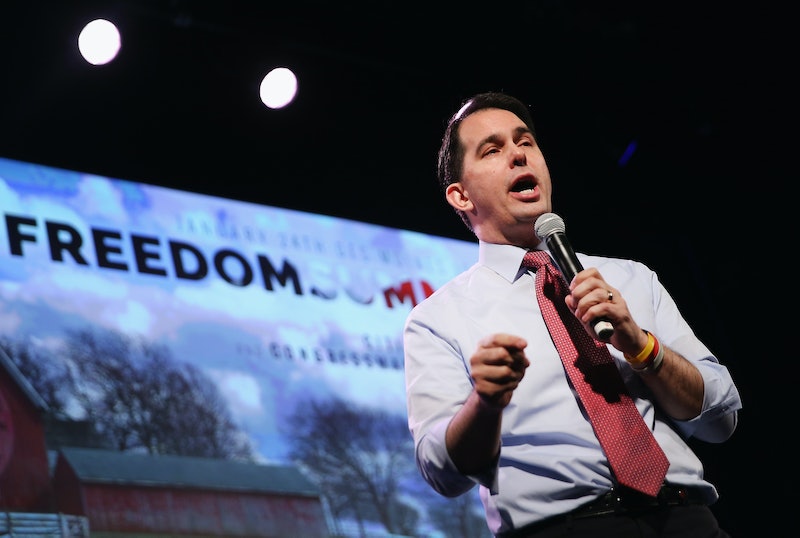 The very conservative Republican that is Wisconsin Gov. Scott Walker has been something of a cause célèbre since first taking office in 2011. The former Milwaukee County Executive hasn't exactly shied away from the limelight, propping up his previous campaign efforts with right-wing policies and distinctly conservative jargon. Out of all the presidential contenders in the upcoming presidential race, Walker might not necessarily be the most heralded, but according to one political science professor, Walker is definitely the most conservative of the GOP field.

Jason McDaniel, a professor at San Francisco State University, claimed in a post on Mischiefs of Faction, Walker isn't just conservative — he's an outright ideologue. And while he may not have the same charisma-factor as rivals Marco Rubio and Jeb Bush, McDaniel argues that Walker has certainly captured the media's attention, as well as the attention of far-right conservative activists in the ever important swing state of Iowa, thanks largely to that very ideology.

"According to the candidate ideology data, Walker stands further to the right than any of the previous six Republican nominees [including Ronald Reagan]," claims McDaniel in the post. Even if data doesn't go back far enough, he says, it wouldn't exactly be a stretch to contend that Walker would fall further right on the scale than Mr. Conservative himself, Barry Goldwater.

True to McDaniel's description, Walker is no stranger to brazen conservative political power plays — but those same right-wing policies have caused definite strife throughout his tenure as governor. Shortly after his inauguration, Walker went straight to work busting up some of the collective bargaining rights held by public union employees (specifically school teachers and university professors) and asking them to pay more into their benefits each month. The backlash was fierce. For months, firefighters, police, and teachers union protesters camped out in the Capitol rotunda in Madison, Wisconsin, in an impassioned but nonviolent show of force.

By March of that year, Walker had issued threats of mass layoffs if public employees did not return to work. That same month, when all 14 Democratic state senators fled to Illinois in order to stall the passage of the union-busting bill, Walker's aides utilized a loophole in order to push the bill through, despite Democrat absence. Walker called the Democratic attempt to stall it a "dirty trick" in a statement to the media afterward.

It was an emboldened move by the new governor, to be sure, and it began the murky descent that ended in his 2012 recall election, though Walker was able to hang on to his gubernatorial seat. But it wasn't the last time Wisconsin politics would get a taste of Walker's temerarious policies. In recent months, the governor has bragged of his "100 percent pro-life policy" (including cases of rape and incest), which he outlined in a Sept. 5 letter to Wisconsin Family Action, a nonprofit whose goal is to advance Judeo-Christian values in state politics. In the two-page letter, Walker wrote:

Reflecting on the last four years, we have much to be proud of ... Our state's families and children are better off because of our actions that promote life, freedom and opportunity.

... We prohibited abortion from being covered by Wisconsin health plans and in a health insurance exchange. We passed pro-life legislation that provides women with more information and health protections when they are considering an abortion. We also cut off state funding for abortion providers while maintaining health services for women throughout Wisconsin.

The legislation that Walker was referring to, of course, is a similar measure to those that have been passed in 23 states so far, requiring women seeking abortions to undergo an ultrasound prior to the procedure. Wisconsin's law in particular goes one step further, mandating that doctors must not only perform the ultrasound, but must describe the image in full detail to their patient.

In that same letter to Wisconsin Family Action, Walker also detailed his stance on gay marriage ("I gave my oath to uphold ... the Constitution [and I] support marriage between one man and one woman") and touts his passage of Wisconsin's current concealed-carry law and his rating with the NRA ("an A+").

Walker isn't alone on the right end of the spectrum. McDaniel explains in his post that he falls within the same vicinity as Rand Paul or Ted Cruz. But what makes him appealing to conservative voters isn't that he's an ideologue — it's the fact that he doesn't seem like one, at least in comparison to other party players. Says McDaniel:

In Scott Walker versus Jeb Bush, party elites and primary voters are presented with clearly contrasting visions of the future direction of the Republican party. We should expect to see Walker’s opponents argue that he is too ideologically extreme to be a viable general election candidate. At the same time, Walker will no doubt be able to make a compelling case that candidates such as Jeb Bush and Chris Christie are so moderate as to be untrustworthy on issues of import to many in the party.

Perhaps Walker's perceived sentimental neutrality and even-handed conservatism might also be the result of his apparent inability to draw fervent enthusiasm. In a Q&A session at the Chatham House foreign policy think tank in London on Wednesday, Walker came off less like a Republican visionary and more like a duller (and less astute) version of his bolder counterparts. When asked about whether he believed in evolution, Walker replied:

For me, I am going to punt on that one ... That's a question politicians shouldn't be involved in one way or another. I am going to leave that up to you. I'm here to talk about trade, not to pontificate about evolution.

When pushed for an answer, he added: