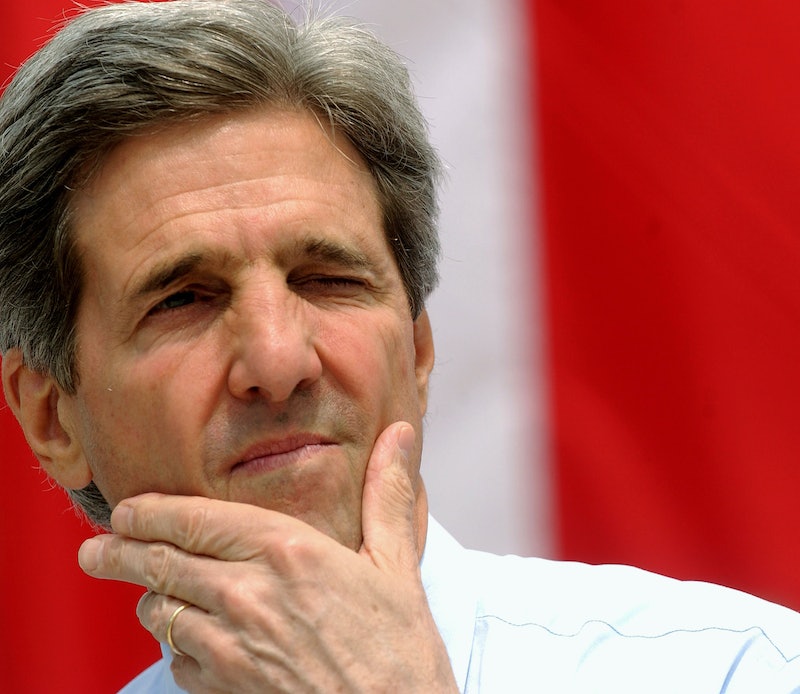 We still don't think Vladimir Putin deserves that Nobel Peace Prize he's been nominated for, but this is good news: Secretary of State John Kerry noted the excellent progress made by weapons inspectors in Syria Monday, saying he was "very pleased." Kerry met with Russian Foreign Minister Sergey Lavrov in Bali, Indonesia, at an Asia-Pacific economic conference, where the two gave a joint press conference on the efforts to destroy chemical weapons. Before President Barack Obama cancelled his trip to the summit because of the federal government shutdown, he was expected to discuss Syria there with Putin.

"It is a good beginning, and we should welcome a good beginning," Kerry said. The progress made on Sunday was just a start, but was “extremely significant,” he said. The inspectors had begun dismantling Syria's weapons, using crude methods to make vehicles for the transport of chemical weapons unusable. Their initial goal is to disable transport vehicles and sites where chemicals are converted into chemical weapons. After, the team will move on to disabling battle-ready weapons.

One of the inspectors said, "It was an excellent first day, with the stress on the word 'first,'" Reuters reports. The inspectors are working with Syrian government officials to meet a Nov. 1 deadline for a clear-out of chemical weapons, set by the United Nations Security Council. Russia, a close ally of Syria, blocked efforts to include clear punishments in the event that the regime of Bashar al-Assad fails to cooperate.

As of Monday, it appears that the Assad regime is still on board. "I think it is extremely significant that yesterday, Sunday, within a week of the resolution being passed, some chemical weapons were already being destroyed," Kerry said, adding, "I think it's also credit to the Assad regime for complying rapidly, as they are supposed to."

Lavrov also expressed optimism that the regime would continue to cooperate. "Damascus is cooperating flawlessly with international inspectors," he said. "We hope that this will continue."

Meanwhile, activists within Syria continue to call the focus on chemical weapons a distraction in a civil war that has claimed over 100,000 lives. "The international community is celebrating the victory of keeping Assad as president despite the fact that he has killed hundreds of thousands," one of them told Reuters. Chemical weapons — most prominently, an Aug. 21 attack just outside Damascus — have likely been responsible for under 10 percent of deaths during the more than two years of the Syrian civil war.

But Kerry and Lavrov also looked ahead to bringing the different parties in the civil war together for peace talks in Geneva, something that might happen as soon as next month. Just last week, Assad announced that he may not run for reelection.

"We re-committed today very specific efforts to move the Geneva process as rapidly as possible," Kerry said, adding that a meeting with the UN's special envoy for Syria is on the horizon.

Meanwhile, China and Japan have waded into the shutdown debate by insisting that under no circumstances should the U.S. neglect the debt-ceiling crisis in the wake of all the drama. Both China and Japan are heavily affected by the American economy, which would be thrown into crisis if a budget wasn't settled on by legislators. Said China's vice foreign minister: "We ask that the United States earnestly takes steps to resolve in a timely way the political issues around the debt ceiling and prevent a US debt default to ensure safety of Chinese investments in the United States."