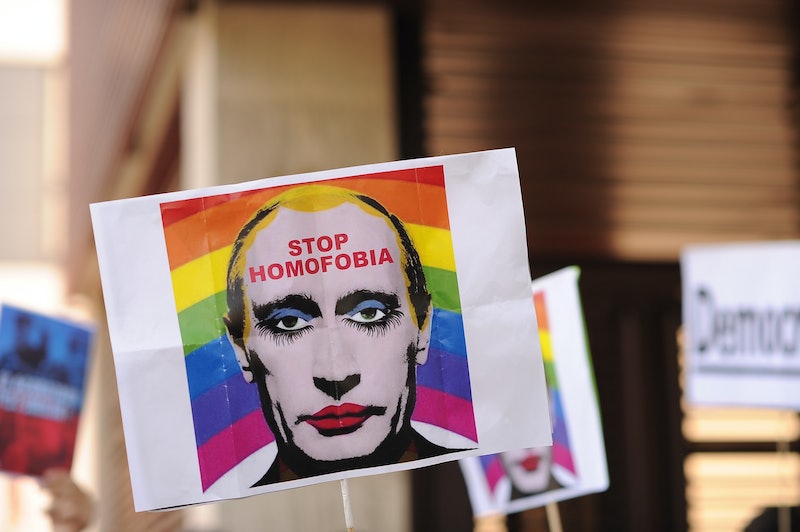 In spite of, well, everything, Russian president Vladimir Putin has just been nominated for the Nobel Peace Prize. Past recipients have included Mother Theresa, Archbishop Desmond Tutu, and President Barack Obama. While each of those leaders may have their flaws, none of them are responsible for, say, providing Syria with murderous weapons, storming the country of Georgia with very little cause, outlawing "gay propaganda," or complaining when NATO tried to save the lives of thousands of Libyans.

But, then again, none of those three people managed to convince Syria to disarm themselves of chemical weapons. Which was an excellent, life-saving, war-preventing move from Russia, and is the primary reason Putin has been nominated. But hasn't Putin had enough international attention lately, particularly in the New York Times ? If you thought that Putin was pretty insufferable already, that was Putin minus the world's most prestigious award for bringing about peace.

So whose crazy idea was this, anyway? The Russian advocacy group (deep breath) International Academy of Spiritual Unity and Cooperation of Peoples of the World nominated him, claiming that Putin deserved the prize for his "efforts to maintain peace and tranquillity, not only on the territory of his own country, but also actively [promoting] settlement of all conflicts arising on the planet."

In fact, continued the group, he deserves it far more than Obama. Direct quote from a member of the Russian parliament Tuesday:

Barack Obama has the title of Nobel Prize winner — the man who initiated and approved such aggressive actions on the part of the United States of America as in Iraq, Afghanistan, some others, and now is preparing for invasion of Syria. I think our president, who is trying to stop the bloodshed, who is trying to help to resolve this conflict situation through a political dialogue, through diplomatic language, deserves this title more.

Speaking of political dialogue, let's take a trip down memory lane to revisit some of Putin's political choices, in other words all the reasons he shouldn't win.

#1. He nixes his political opponents before they have a chance to run against him, by throwing them in prison

#2. He detains anyone who looks faintly like they might protest against his methods, like in one case when a guy was questioned for hours for "looking young and hip."

#3. After the Pussy Riot staged an anti-Putin prank at a church, Putin had three members thrown in jail for two years apiece. He said they "got what they deserved." Just this week, he detained environmental protesters from Greenpeace.

#4. His wildly homophobic "anti-gay propaganda" law. (Here, you can find out what it was like for a gay American living in Russia after the law was signed in.)

#6. He stages all of his own photo ops, like these 39 shots of Putin riding horses draped in fur and shooting guns. (We'll spare you the embedded images.)

#7. He's provided Bashar al-Assad with lethal weapons and helped keep Syria's economy afloat, because dictators have to stick together.

#8. He launched a full-scale assault on the country of Georgia over a tiny border dispute.

#9. He "didn't like" the NATO intervention in Libya, which was implemented in an effort to save thousands of Libyans from a murderous regime.

#10. Even though you're not meant to serve three terms of president, Putin just changed the law and did just that anyway.